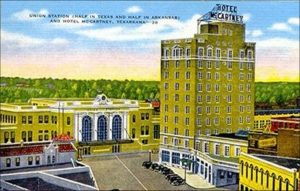 Built in 1929 and designed by Joseph Finger, the McCartney was named after W.A. McCartney, SR.
McCartney became a very important man in Texarkana who moved to the town as a small child in 1874. Unfortunately due to air travel becoming more popular than rail travel, business declined in the mid 1970’s enough to force it’s closure.
It remains abandoned today and is just a shell of what it used to be.

Who owns it and is it for sale?

The interior is very good and the building is well maintained…

Much thanks for this brilliant site. elegantly composed and useful substance you have.

Thanks for sharing amazing information !!!!!!
Please keep up sharing.

This pictures are eerily fascinating. I can't stop looking at them. I keep finding myself looking through them and losing track of time. Great interesting website.

The mccartney hotel moved to the town as a small child for the years,making the better force it’s closure. You can find here more updates about abandoned today and is just a shell closure.

Im going to be in town for work, with cameras in tow, its my hobby considering i travel soo often. Is the building open to photograph?
Fred. T

The building is really big and it occupies a significant part of the total view of the city and it is sad to know that it is just a shell of what it used to be.

Around the state, the number of buildings is damaged and now they are getting decline because of no one give attention to them. The old building is the heritage of the state and they must be maintained and stay in good condition to acknowledge tourists about the history. Thanks to you sharing the wonderful update about the old hotel building information.

I love this building. If I remember correctly, this is also the tallest building in the downtown Texarkana area (someone correct me if I'm wrong). I've only seen it at night, so these photos are really cool to see and mentally compare my personal recollections with. Another awesome post!
Cheers from Texas,
Dee

wpDiscuz
13
0
Have history here? Would love hear your stories or your thoughts.x
()
x
| Reply