Home»Year»Built»1920's»Masonic Home For The Aged

On the northwest corner of E. Harrison and N. Ash is a six-story brick building that once housed a Masonic Home for the Aged. Construction began in 1926. Thirty-seven residents moved into the facility in 1927. In 1928, the official name was changed to Charles L. Reeder Dormitory.

A rather Dated and comical entry was found in the records of the Masonic Charity, dated 1925 when the Aged were housed in the same facility as the Orphans:
“After commenting on how well the children in the Home are doing in Guthrie, Grand Master Henry S. Johnston commented on the importance of establishing a separate Home for the Aged rather than continuing to house the two populations together.

“The old people must be gotten out of the Home. Elderly men smoke and chew and swear and old men and elderly men and elderly women both grouch and complain, and the very playfulness which makes a boy the delight of a parent, the sunbeam of a home, renders him an object of aversion to some elderly persons who are not related to the boy or interested in him, especially when his noise and play clashes with their past habits of life or the condition of nerves of the elderly person.”

The Home grew, with 88 residents in 1931, and after a 4-story annex was constructed in 1955, a total of 107 residents were housed in the two buildings. A new Home was constructed on the west side of town in 1976 and 78 residents moved to that new location in 1978. This six-story building was closed. In 1995, the Masonic Charity donated this building to Logan County. It is currently vacant.

The building is an L-shaped building, with the main entrance on the south side of the short leg. The entrance has a small covered portico with a stone surround and a tiled step showing the Masonic symbol. There are double wood doors, each with 12 panes of glass. The windows for the most part are set singly with wood-framed double hung sashes. A vertical row of double-set windows are above the entrance, and a set of four windows on each floor on the south side of the long-arm of the building. On the east side of the building a projected room on each floor contains a sitting area with three walls of windows.

The large, two-sided marble cornerstone sits on the southeast corner of the entrance portico. It shows the building to be constructed in 1926 with Hawk & Parr the architects, and Campbell & Price, the builders. The Building Commissioners are listed on the cornerstone. 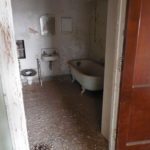 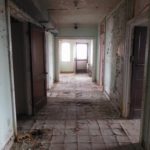 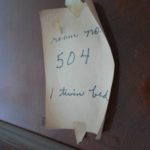 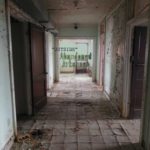 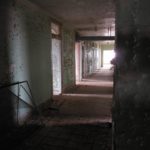 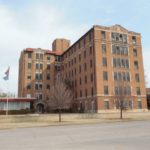 fantastic. Old paint peeling in photos is so heartbreakingly lovely. And pink rooms are my favorite!

I love the white china cabinet and the radiators. I miss having radiators in my house.