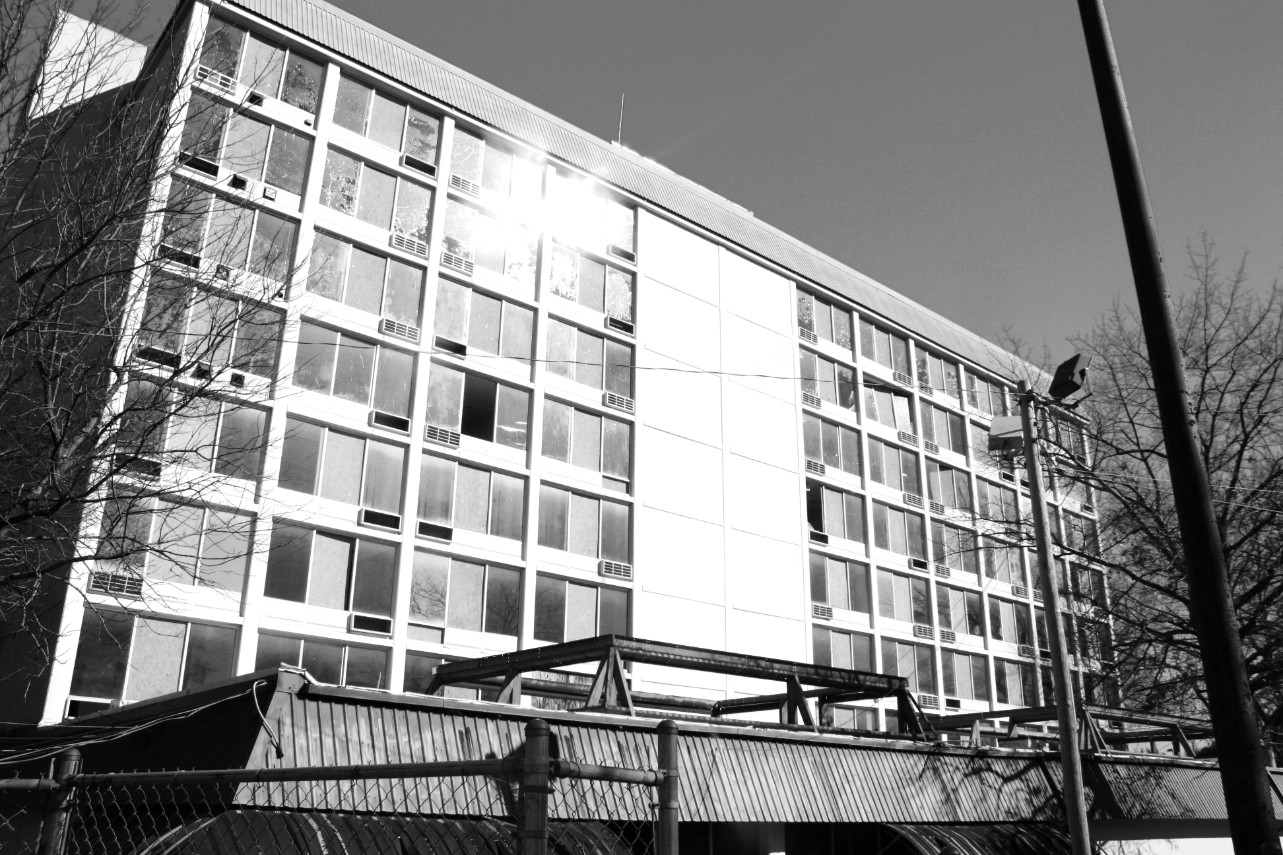 This empty eight story building looms along the side of I30: it is the former Little Rock Job Corps center. The building has been a crumbling reminder of waste, with a history of break-ins, theft and squatting. After several unsuccessful attempts to bring a Job Corps center to the city in the early 1970s, a JCC finally opened in Little Rock in the former Red Carpet Inn in 1981. In 2008, the center moved from there to its current location. It is now owned by LEDIC and has a full time caretaker, locked tight to any trespassers.

This wasn’t always the case; LEDIC had big plans for the building. In 2016, a letter of support was submitted to the Little Rock Board of Directors for an application to the Arkansas Development Finance Authority (ADFA) that proposed a mixed-income housing development using Low Income Housing Tax Credits (LIHTC) to rehabilitate/convert the existing structure to a multifamily complex designated for elderly residents.

The developer proposed to rehabilitate and convert the building into a 77 unit mixed-income multi-family complex, including 16 market rate units, all designated for elderly residents, 62 years and older. The proposed $5.5 million renovation to the complex would have consisted of 73, one bedroom units (approximately 789 square-feet/unit) and four, two-bedroom units (approximately 1,015 square-feet/unit) with proposed monthly rents at an average of $678 and $770 respectively, including all paid utilities, and an on-site laundry facility.

This plan, nor a proposed plan in 2013 to turn the building into a home for pregnant teens, never came to fruition. Objections from the Pettaway Neighborhood Association has requested it be demolished, which is not an easy task. The powdered asbestos, which can be sealed, provides a much larger risk if the building were to be brought down.

The potential for renovation exists. If a buyer is available and able to propose an agreement that the city and the neighborhood association approves, what many refer to as an eyesore can once again become a part of downtown’s renovation and revival.

DO NOT ATTEMPT to access this private property. It is locked and monitored by an on-site caretaker and video surveillance. Interested parties who wish to consider buying the property need to contact LEDIC.

Wow, so sad to see those pics. I also went to school there in 1997 and also was a Plumbing instructor there from 2006 to 2008. I left went Deljen Inc lost control of it. I still think about that place every so often. Because of that place I became what I am today

Why did job corps close down ? Many memories for me. It’s ashame that the property looks like that now. It used to be so beautiful when I was there.

I was in that Job Corps Center my dorm room #817. When I saw these pictures so many memories can flooding back good and bad ones. I was a 1997 graduate of the Little Rock Job Corps Center

yeah I went in 1996 and looking at these pictures really did bring memories back.. omg

I also went to LRJC in 96-97 my name is Iesha Davis Mcginnist I married Charles Mcginnist who also went there. I almost cried it looks so bad but I had a ball met so many cool people so much nostalgia

I went to the JCC in morganfield KY in the early to mid 90's, and was like hrmm going through your photos (and they are awesome). But I just lost it (humor wise) when you took a pic of the old Ramen noodles bag. I still can't stop laughing, its like Job corps poured a bag of Ramen to show respect to the old site before leaving (think a 40 of beer on a homies grave) My fiancée still doesn't understand why I found it funny as hell. You have to understand thats ALL we ate really!

Thank you, my friend!!