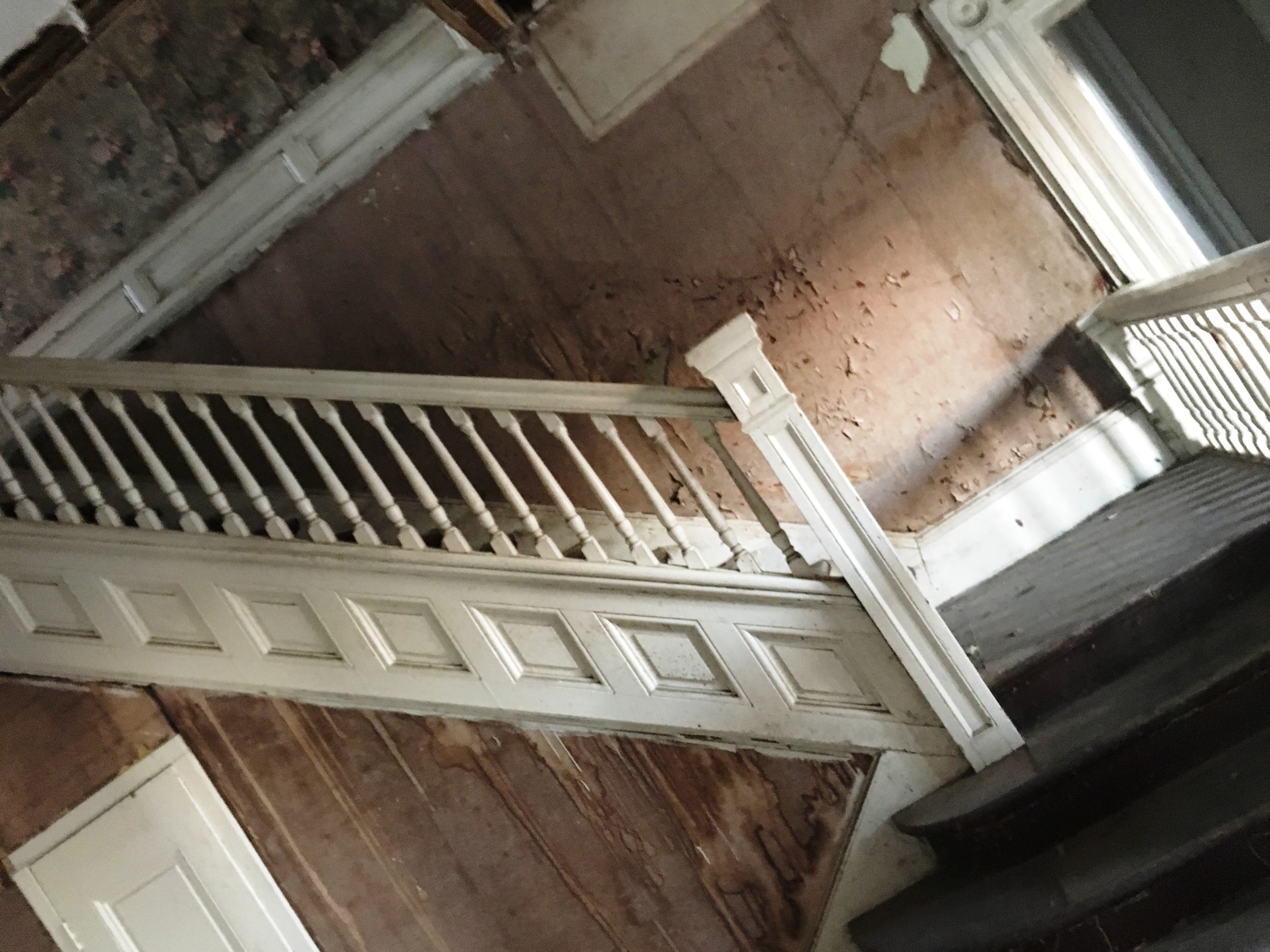 The Woodruff House (added to the National Register of Historic Places on March, 21, 1989) is significant for its association with William E. Woodruff, founder and longtime editor of the Arkansas Gazette, and because it is one of the few antebellum homes remaining in the capital city. 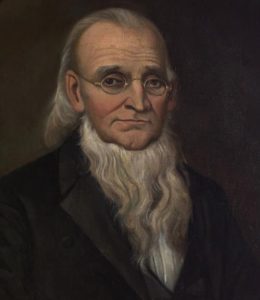 Woodruff established a successful business as an agent for non-resident owners of military lands in Arkansas Territory, and the additional revenue enabled him to construct a two-story, brick building at the northeast corner of Markham and Scott streets. In March 1827 he moved the Gazette, as well as his book business and land agency, into the building.

While he was a bachelor, Woodruff and his apprentices lived in the various newspaper offices. Then on November 14, 1827, Woodruff married Jane Eliza Mills, the niece of Isaac and Maria Watkins. The Woodruff family lived in the building at Markham and Scott streets until the early 1850s. By 1850 downtown Little Rock had grown considerably and so had the Woodruff family. William and Jane Eliza Woodruff had eleven children, eight of whom survived to adulthood.

Woodruff sought an area in the country where he could have a small farm and his children could play, so he bought about 25 acres east of downtown Little Rock. His land was roughly bounded by Rector, College, Seventh, and Ninth streets. In the spring of 1852, Woodruff hired local builder John Robins and his son, Louper, to construct a large, 2 ½-story house facing south on East Ninth Street. The house was built with locally-made bricks and likely had a one-story Greek Revival-style front porch. 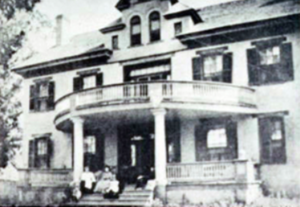 The Woodruff family moved into the new home in March 1853, and a few months later an “ell” was added onto the northwest corner of the house for a pantry, dining room, and kitchen. The house was set far back from Ninth Street and had a circular carriage drive.

According to Woodruff’s daughter, Jane Georgine Woodruff, a 40-foot hallway ran the length of the house with two large rooms on either side of the hallway. A curving stairway provided access to all levels. Every room in the house had a large fireplace, and the family usually burned 100 cords of wood each winter. As mentioned above, the house originally faced the “Sunny South” and had double parlors on the east side of the first floor and a library or “father’s room” and a temporary dining room on the west side of the first floor. The bedrooms were upstairs.

The Woodruff House was truly an urban farmstead, complete with an orchard, gardens, stables, servants’ houses, and open pasture. The orchard was on the west side of the front yard and supplied a plentiful amount of fruit. A 2-acre vegetable, fruit, and flower garden was on the east side of the house with a grape arbor and bee hives in the center. The horse lot was just north of the garden, along with the barn and stables, pig pens, and tool shed. A carriage house, poultry yard, and other outbuildings were located in the back yard as well (north side of the house; now the front yard). The servants’ houses were located on the north side of the house and faced south, each equipped with a large fireplace. The remainder of the acreage was open pasture and forest. The Woodruff family’s nearest neighbor was Dr. Robert A. Watkins, who lived about half a mile southeast of them. Wolves frequently preyed on Dr. Watkins’s sheep at night. The Woodruffs could “hear the wolves howl at night, a very dismal and alarming sound.” In addition to Jane Georgine Woodruff’s recollections, in the early 1920s Josie Clendennin Royston remembered a laundry house built over a brick cistern to the west of the Woodruff House (the cistern is still extant).

After Little Rock fell to Union forces on September 10, 1863, Federal troops took possession of the land surrounding William Woodruff’s house. During the Federal occupation Woodruff, an ardent supporter of the Confederacy, wrote a letter to a friend that was intercepted by the Union army. On March 10, 1864, General Frederick Steele banished Woodruff from Little Rock and took charge of his home. But Jane Eliza Woodruff and her daughters were allowed to occupy two rooms in the house for a few months before seeking shelter with friends. While in possession of the Union army, the Woodruff House served as officers’ headquarters as well as a military hospital (possibly part of the U.S. military hospital established at nearby St. John’s College). Woodruff returned to his home in September 1865.

After the Civil War, Woodruff subdivided his landholdings, platting Woodruff’s Addition to the City of Little Rock on June 7, 1873. However, deeds for the lots were dated as early as 1866.  The Woodruff House then occupied lots 1 and 2 in block 10 of Woodruff’s Addition. William Woodruff lived in the house with his wife, Jane Eliza, until his death on June 19, 1885. Woodruff’s eldest child, Alden Mills Woodruff, occupied the house from 1886 to 1891, when the home was sold out of the family.

About 1900 the orientation of the Woodruff House was reversed to face north on Eighth Street. The original porch on the south side of the house was removed and the original front door opening filled in with a ribbon of three 2-over-2, wood-frame windows. By 1906 a semi-circular porch set on a rectangular base was constructed on the north side of the house. Both levels featured a decorative balustrade. A set of double doors with transoms was situated in the center of the first and second story, providing access to both levels of the front porch. To complete the home’s reversal, a gabled dormer with rounded arch windows and a fanlight was added to the center of the north façade.

In 1921 the Woodruff House became the Cottage Home for Girls, which provided room and board to out-of-town women working in Little Rock. The Cottage Home had 12 bedrooms, each set up to house two or three girls, and provided residents with two hot meals a day. The price ranged from $4 to $5.50 per week. By 1924 the semi-circular front porch was replaced by a rectangular porch with a balustrade on the lower level. Perhaps the rectangular porch was added about 1920 when improvements were made for the incoming Cottage Home for Girls.

By 1930 the Woodruff House was the Colonial Club for Business Girls, and it remained a boarding house or apartments until 2005, when the house sustained fire damage.

Although no major structural elements failed, the Woodruff House has been vacant since the fire and has deteriorated considerably. Many of the home’s first floor windows are broken or boarded, leaving the Woodruff House susceptible to further damage from vandals and the elements. The Woodruff House is currently for sale.

Please visit the Quapaw Quarter Association for more info and an interesting and informative video. There is a desperate need for an investor to save this historic antebellum home and its uniquely rich history.

Bibliography
All source information can be found here:

Many thanks to Patricia at the Quapaw Quarter Association for providing access. This building is monitored and locked at all times.

Thank you for giving the information about History

These old houses need a lot of work and it takes a lot of money.I inquired about it about ten years ago and the price they were asking would make almost to expensive to repair

The house still seems to be in good condition…

The house is big enough. It is sad that places that may have some historical values are simply abandoned.