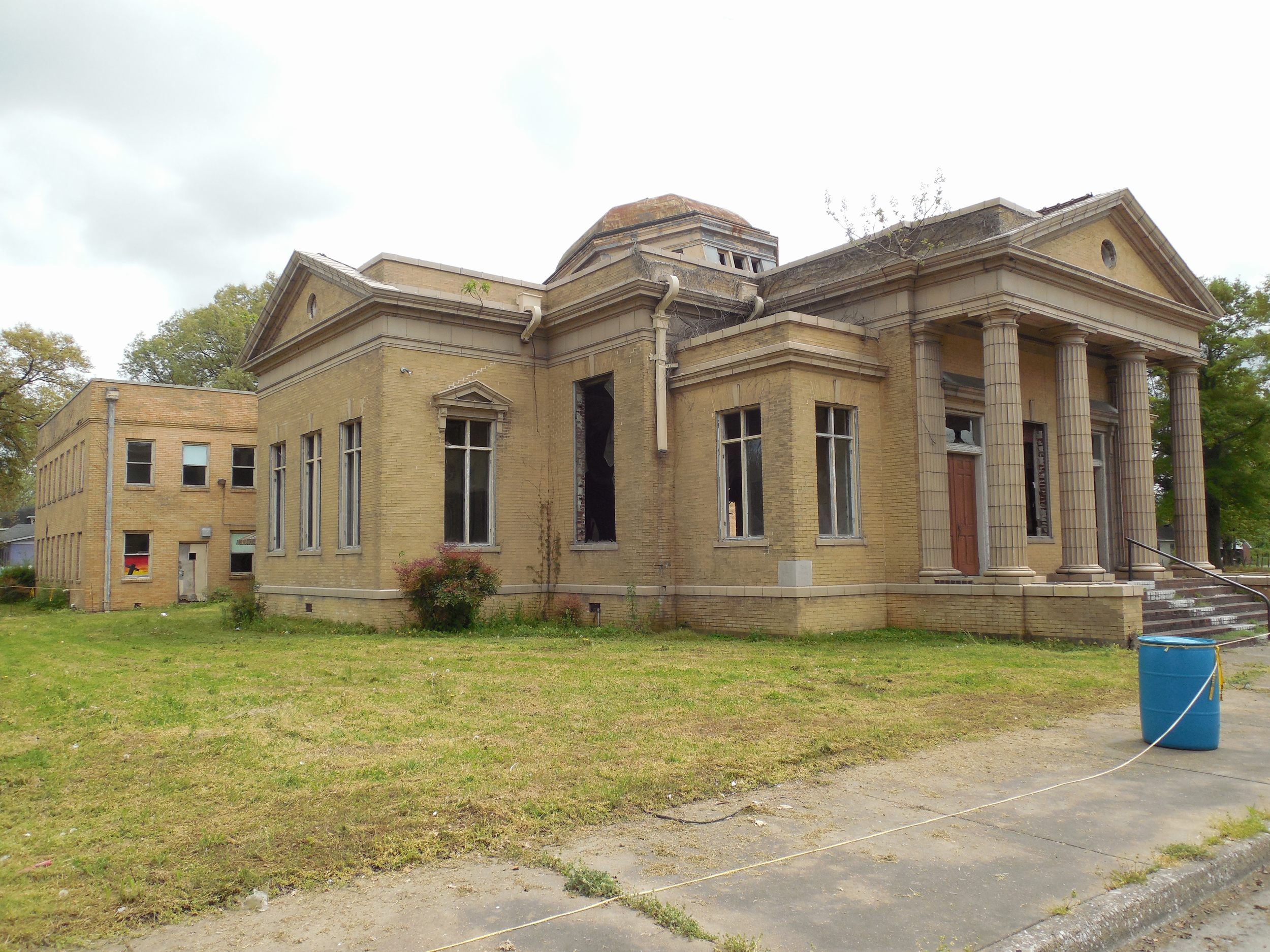 The First Baptist Church of Osceola (FBC) was organized in 1850, making it the first and oldest Baptist church in Mississippi County. On March 30, 1880, FBC purchased a lot and built a one-room sanctuary and parsonage. By 1889, FBC had grown to 181 members showing a quick-growing congregation that would soon need a much bigger place to gather.

Two lots were purchased and construction was underway in 1915. The total cost after completion totaled $21,000 and was finished in July of 1916. A buff brick, terra cotta finish, with a copper dome, carried Classical Revival characteristics making it a handsome building for the growing congregation to worship in. The main sanctuary sat 350 worshippers with beaverboard and natural oak accents. Along with a vestibule, pastors study, and eight Sunday school rooms. The vestibule and Sunday school rooms were constructed in a way that raising the partitions could increase seating capacity to 700. At the back of the church were men’s and women’s dressing rooms/bathrooms. W.W. Taylor & Sons were contractors of the project, this being their fifteenth project completed. Rev. E.F. Curle oversaw the project reporting harmony between everyone on the project.

The Osceola First Baptist Church was formally opened on Septemeber 24, 1916. Rev. E.F. Curle was assisted by Rev. Dr. Potts of Memphis for morning and evening services. Sunday School held at 10 a.m., service at 11 a.m. and 7:30 p.m. and special religious services at 3 p.m.

In 1917, women from Osceola gathered together to ask Miss Margaret Woodrow Wilson to come to the First Baptist Church to give one of her Red Cross Benefit Concerts. The enthusiasm of the women made it impossible for her to deny them and with just a few days to plan and make arrangements the city came together to accommodate the daughter of President Woodrow Wilson. Many people from surrounding areas came and the church was crowded with enthusiastic admirers.

The First Baptist Church in 1956 an educational building was completed on the grounds. Everett Burnette from Lousiville joined the staff as summer educational director. The library contained over 2,000 volumes with librarian Mrs. R.H. Jones. Miss Nancy Blair was director of the music program featuring four choirs with 104 students enrolled. Under Pastor S. Ray Crews the building was remodeled and redecorated in 1968, a parsonage built, a new pipe organ was bought amongst other improvements bringing the value of the entire property owned by the church to $325,000.

The church met at this location until moving into its present facility on May 16, 1993, after the more than 1,500 members became too crowded for the location. The compound was placed on Preserve Arkansas’s 2010 Most Endangered Historic Places list.

HI! I’m so glad/sad to see these pics of FBC in Osceola! Me and my sis grew up in this church. My mom played the organ. Mr. D was the music director, who has passed on now…me and my sis played the handbells/choir and the adult choir went to England to play handbells as well. The handbell ladies also created a Bells -A-Ringing cookbook to raise money (I still have one). Such wonderful memories! So sad to see it like this though. It never looked like this growing up of coarse. We remember all those wallpapers too! Brings back so… Read more »

It’s cool to see abandoned pieces of history within 10 minutes of where I currently live! This was very interesting and I didn’t know this was in Osceola.

Very nice. I like seeing them here, makes it easier for people to find. If anyone deserves it, it's you. I hope you keep up the good work, you have a fan in me.

Hello there, because the weather was pretty terrible this morning so I chose to stay at home and surf the web instead, it was actually quite a good journey to have called in at this site. I just needed to praise you upon the quality of the work you have done here and to wish you the best of luck with it as you progress in the coming years. It was a hoot to explore your site and I shall most certainly be calling back again shortly to see just how you are faring. Cheers and I shall see you… Read more »

The postings on your site are always excellent. Thanks for the great share and keep up this great work! All the best to you.

Nice to see this abandoned arkansas, it is mostly about church, it has been sharing info about first baptist church really nice to watch this church. Best classical looking and revival style, thank you.

Thanks for doing such a lovely job on the pictures. Still working on saving it, just not having much luck with our fundraising efforts.