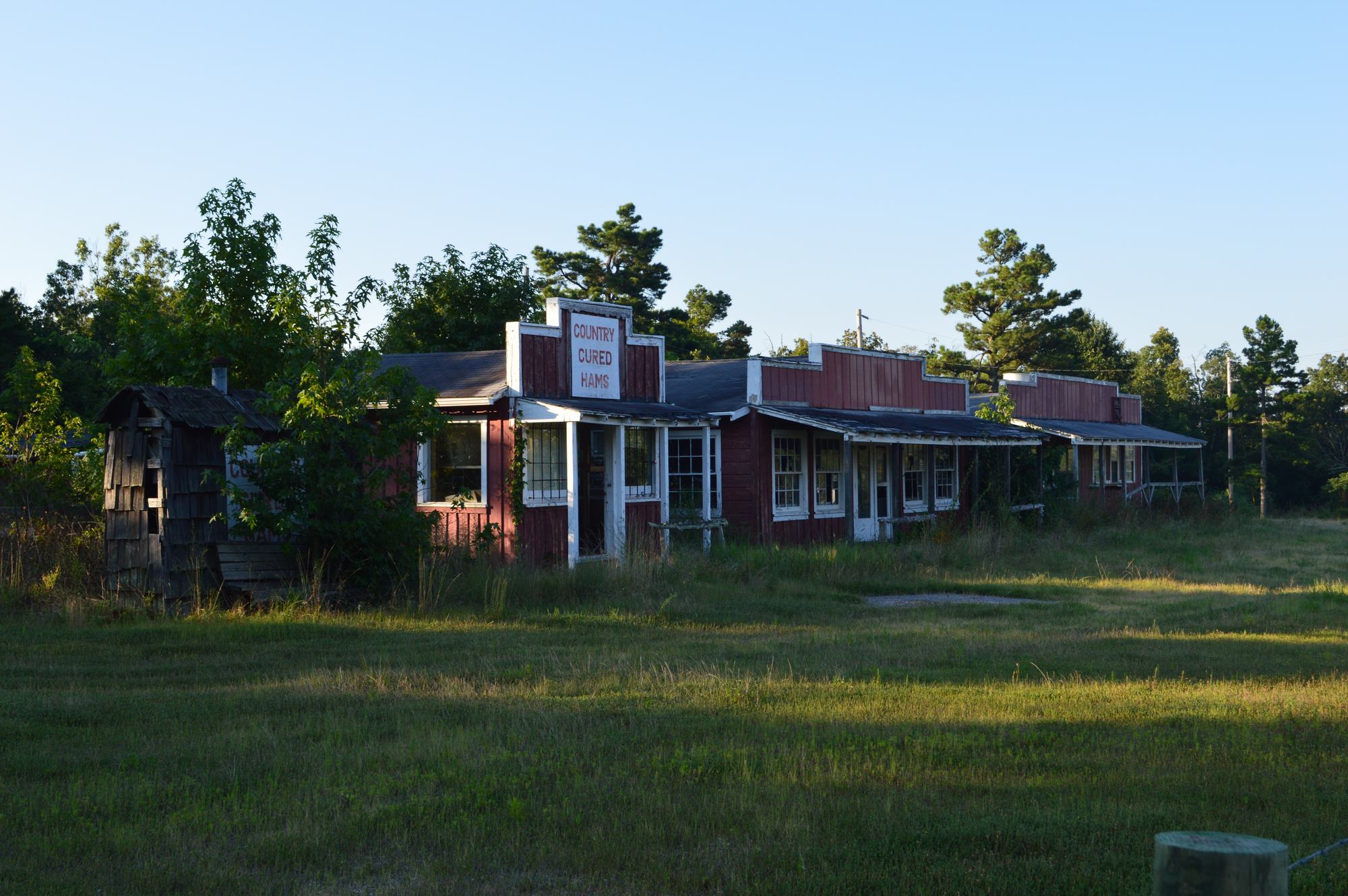 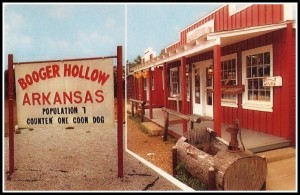 Situated in Pope County, Arkansas, Booger Hollow was once a popular tourist attraction along the Scenic 7 Byway. Though it is a “ghost attraction” today closed and abandoned, it’s still worth a stop for its interesting photo opportunities, especially the main attraction — a two-story outhouse.

Though many Arkansans would love to rid themselves of the hillbilly stereotype, places such as Booger Hollow and Dogpatch, USA to the north, perpetuated the theme. Though both are closed today, there are others such as a new “hollow” attraction — Chiggar Hollow to the south, and others throughout the state. And why not, it’s fun.

Such was the case in the early 1800’s when the road from Harrison, Arkansas ran through the Bull Frog Valley to the site of where the geographic site of Booger Hollow stands today. On either side of the hollow were two cemeteries, leading the locals to believe the area might be haunted by those long dead. The name stuck and has forever since been known as “Booger Hollow.”

Interestingly, there are other “Booger Hollows,” or ghost valleys in other states including Tennessee and Kentucky. Additionally, the town of Boozeville, Georgia was once known as Booger Hollow. 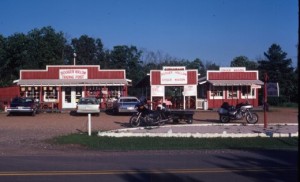 In 1961, the Booger Hollow Trading Post was established and though it was not actually on the original site of the hollow, it took the name. In fact, the trading post is situated on a mountain top some ten miles away, only added to its quirkiness. For more than forty years, the attraction operated enticing visitors along with highway with multiple road signs announcing the distance to the attraction – “Booger Hollow Ten Miles,” “Booger Hollow Nine Miles,” etc. Upon arrival a sign welcomed visitors that stated Booger Hollow was home to only seven people and a coon dog.

The trading post consisted of the trading post, which featured loads of hillbilly themed knick-knacks, hand-crafted items, antiques, and local simple-life goods like honey and sorghum and lye soap. It also once held a post office and sold bait. Next door was a restaurant called the Chuckwagon, that featured items such as the boogerburger, boogerdog, and other hillbilly fare. On the other side of the trading post was a small store that sold cured hams.

But, the main attraction was and is the two story outhouse, which was added as a prop to entice travelers along the scenic highway to stop at the trading post. The lower level is practical, but the upper facility is perpetually closed, with a sign on the front indicating “upstairs closed til we figure out plummin.” This ingenious idea worked and continues to lure sight-seeing tourists to today. The tourist stop claimed its main attraction was the “World’s Only” Double-Decker Outhouse. However, in actuality, Booger Hollow has had to share this dubious distinction with several other locations, including Nevada City, Montana; Gays, Illinois; Silver City, Idaho; and a number of others around the country. However, this two story privy may very well be the best, at least in terms of photo opportunities. Just the name “Booger Hollow” is enough to make this tourist stomp the brakes and make a screeching halt while traveling along Arkansas’ Scenic 7 Byway.
In 2004 the Booger Hollow Trading Post was sold. However, since that time, it has never reopened. It is located along Scenic Byway 7 north of Dover, Arkansas.

Saw a pic years ago after it had closed. I went there as a child on vacation. Something made me look it up to see if it was still there. The pic on the website I was on was similar to the main bldg pic on here. It was scrollable from one room to the next. You could pull the pic out or zoom in in every little nook and cranny I saw a display case of crystal rocks all busted and the glass still everywhere The back room had a door leafing outside . But in that room there… Read more »

Is it for sale?

Can you ghost hunt there?

This would be amazing for an airsoft place

This would actually be a great stop if you take the hog trail on the way dog patch. passed it when we went there last year but didn't stop

Loved the place! I proposed to my wife while we were visiting there and I used a little pink stoned ring I bought there as the engagement ring.

Does anyone know if the buildings are repairable ? Who owns this place?

Never drove past that we didn't stop as I grew up. It was always such a special treat. And now it is just a special memory (same as Dogpatch) that I wish I could share with my children and grandchildren. Makes me sad to see such special places lay in ruin.

We have a place deep in Clark County we called Booger Holler growing up! Lol

We drove by there Sunday on the way home. Pretty sad. I bought a lot of junk in there. Still have most of it…

I was one of the last two people to work there….. I managed it up until the last 6 months it was open…… it was still doing very good buisness 4 months out of the year….. The guy that had the lease on it was short sighted and thought it should make money 12 months out of the year he had no understanding that it was a seasonal operation……. Very sad to see what became of the place since it closed 10-11 years ago………………

They've moved the road so close to it now…surprised it's still there!

The name "Booger" has never been an attraction, I'm fairly certain.

Hey Now that was a cute little place the grocery store ,post office,gas,mail,doctor and vet all in the same building

I miss that place n my Moms hamburgers she use to cook there! They seemed better than the ones at home n I don't know y but they did.

Interesting to read about this. I made the rocks for many many years. Mom made lye soap and my sister made some things also. When we moved down here from Kansas, I made crafts and took some hand painted clothespins to the store and the owner asked me if I would start painting rocks for him and that is how it all started.