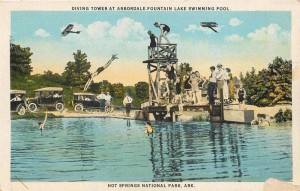 Built in 1933 not far from Fountain Lake School District, lies a big white stucco archway, for many years people have wondered what is behind that big white stucco archway, Dr. H. D. Ferguson developed the property back in 1933 until 1949 and operated it as Fountain Lake, an entertainment complex just 4 miles from Hot Springs on the old Little Rock highway. Fountain Lake had picnic areas, a large swimming pool, dance pavilion, lodge, cottages, a wishing well, pinball arcade and fireworks on July 4th! Local historian Bill Lerz claims that as many as 1500 to 2000 people gathered for leisure and amusement beyond the white archway. The Welchman family took ownership in 1945. On Sunday morning, December 20, 1953 the property was destroyed by fire. It was never rebuilt. In 1958 the Arkansas Sheriff’s Association considered buying the abandoned property for a proposed boy’s ranch. In 1962 the Fountain Lake resort property of 157 acres was purchased by Arbordale Springs, Inc of Springdale, Arkansas. The intention was to develop a Lutheran Senior Citizens Home and retirement area. That dream never became a reality. The property is now owned by Affiliated foods of Little Rock, who purchased it in 1993. Five of the 25 springs on the property produce more than one million gallons of spring water a day. If you drive by the facility now, sometimes you can see tanker trucks hauling water to Little Rock to be bottled as Mountain Pure Drinking Water. Although this is the original Fountain Lake, there is a neighboring town with that same name, including Fountain Lake Schools and Fountain Lake Shopping Center.
Information from: http://www.hsnp.com/zz-fountainlakeproperty.htm

Your website is so informative and this article is very helpful. I will visit again on your site in future.

Amazing post , Thanks Dear for such s great information

I believe this is among the most important information for me. And I'm glad studying your article.

Can i make my home there? or buy land?
Residential Appraisal Calgary

If you want to become a property broker then be a part of any property training institution or work with any experienced person for some time. House comps in my area

To become a property broker is not difficult if you have experience of this type.

Really your submit is sincerely excellent and I admire it. It’s tough to type the coolest from the bad now and again, however I think you’ve nailed it. You write thoroughly that is super. I definitely impressed by means of your put up.

Also, you have the option of precisely monitoring your calorie intake. Order a Pizza and do a quick sprint up the stairs instead of taking the elevator.Need to socialize? Take the elevator!

nice information thanks for sharing.
Plots for sale in bangalore

Dan Hawthorn
Brings back memories when I was a teenager dating and taking girls out to see Fountain Lake Resort. I graduated from CMS in 53.

I graduated from Foubtain Lake High School in 1968 and I remember skipping school a couple of times and we went to Arbordale! That was when the Larsens owned it. Good times.

Was it the dance floor wood and raise over water? I heard it moved also.

The dam was rebuilt a couple of years ago, and that new dock was put in by the current owner (not Affiliated Foods, that info is out of date, sorry) because someone was looking at buying the property. The negotiations on it have been going back and forth for a while, but it's still up for sale as far as I know. The plans were at the last I knew, to restore it to what it was originally…I'm surprised AA didn't go back along the side of the mountain on the left hand side of the property and get pictures… Read more »

I used to go there with my family and friends back in the 1949 – 1953 era until it burned down. It was a favorite family entertainment area along with Whittington Park, The Gorge and Bather's Field (for the Class “C” Hot Springs Bathers baseball team).
We had many fun filled picnic days at Fountain Lake. I believe it was about $1 per car load admission.
I will try to visit on my next trip back to Hot Springs.

My Email
Reply to  Jim Barber

Jim Baber did you have a relative named willam James Baber married to Shirley Turner?

wpDiscuz
27
0
Have history here? Would love hear your stories or your thoughts.x
()
x
| Reply