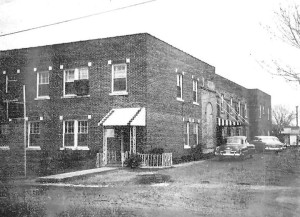 In January 1949, the Verser Clinic Hospital was opened by Dr. Walter William (W.W) and son Dr. Joe Verser. It was a twenty-five bed facility housed in the former First Baptist Church of Harrisburg Arkansas. Three of the back rooms in the clinic were made into an apartment for Dr. Joe and his wife to live in. They lived there for thirteen years. Patients would sit down at his breakfast table and discuss their ailments.

In 1947 Dr. Joe joined his father (W.W) on the Arkansas State Medical Board which is a licensing and disciplinary board for physicians. Dr. Joe became secretary in 1949 and remained as such for 43 years until he retired from the position in 1991.

Dr. Joe Verser was one of the 18 founders of Arkansas Bluecross, Blue Shield in 1949. The program offered for individuals, hospital and surgical benefits for $1.85 a month. Families regardless of the size had the same benefits for $4.35 month.

Verser Hospital closed in 1973 and Dr Joe saw patients needing hospital care at Cross County Hospital in Wynne or Methodist Hospital in Jonesboro. He was chief of staff at Methodist hospital, 1978-1979. Even though an exact count was not recorded, it was estimated that he delivered over 5,000 babies. He said “It wasn’t that I was that good, I was just cheap, affordable, and available.” He was paid $2 for the first baby he delivered.

On February 3, 1994 while sitting at his desk in an exam room, completing paperwork for a patient, Dr Joe Verser passed away at the age of 81. He had practiced medicine for 57 years.

Caution: Permission was granted in order to photograph the Verser Clinic Hospital. The building is locked and patrolled by city and county law enforcement.

KDC Dental Care founded in 1997 and has been successful in providing treatment since then. We use the most advanced dental technology and have proved to be one among the best dental clinic chain in India. We provide quality dental care in a happy, professional and caring environment.

I was born here,Dr. Joe delivered me in Sept. 1955. I hope they restore this piece of history. I want to visit it one day.

I think it can be a perfect place to start clinic and I think it needs to be renew.

We have given several tours of this historic site, if you are interested in a guided tour please contact me via email at landon.bates16@gmail.com

Possibilities are if they've been in business for 10 years or longer, they're likely well-established in the community and a good overall choice. You can ask them how long that it requires to finish a common job.

“not pro-Hamas.”Yes, but they do not “condemn” Hamas. Is that good enough? They simply “oppose” the rocket attacks. Hardly the condemnation you hope for.

Touched so many lives. Hope it can be restored, hate that it is in such bad shape. So much history in that building.

Where I as born. Hate to see it in disrepair. Hope it is preserved.

The abandon date is incorrect. I went there for a physical to attend Girls State in the mid 80's

I was born there in 1965 and when I was in college in 1983 Dr. Joe treated me at the Methodist emergency room in Jonesboro.

I was born there in September of 1959!! Sewed my hand up when I was in 6th grade and put a cast on my arm the same year!! Lots of memories from that place! Would love to see it restored!!

nice article , thanks for sharing.try to visit my crip bedding for boys and girls.

139I like what you guys are up also. Such smart work and reporting! Keep up the excellent works guys IÃ¢Â€Â™ve inrapcoroted you guys to my blogroll. I think it will improve the value of my site 24

What a cool catch on the metal! Dude, I’m totally impressed. I love the Dusenberg angle. I was also fascinated by the reference to the “Car Crash Crucifixion Cutr8le&#u221; article by Julian Darius, which seemed to imply the cultlike worship of Dean ascribed magical powers to the car’s pieces. Thanks for stopping by and thanks for the comment. This discussion has turned interesting for me. Maybe a new chapter of my James Deaning it (that’s what I call my research) is about to begin.

wpDiscuz
58
0
Have history here? Would love hear your stories or your thoughts.x
()
x
| Reply