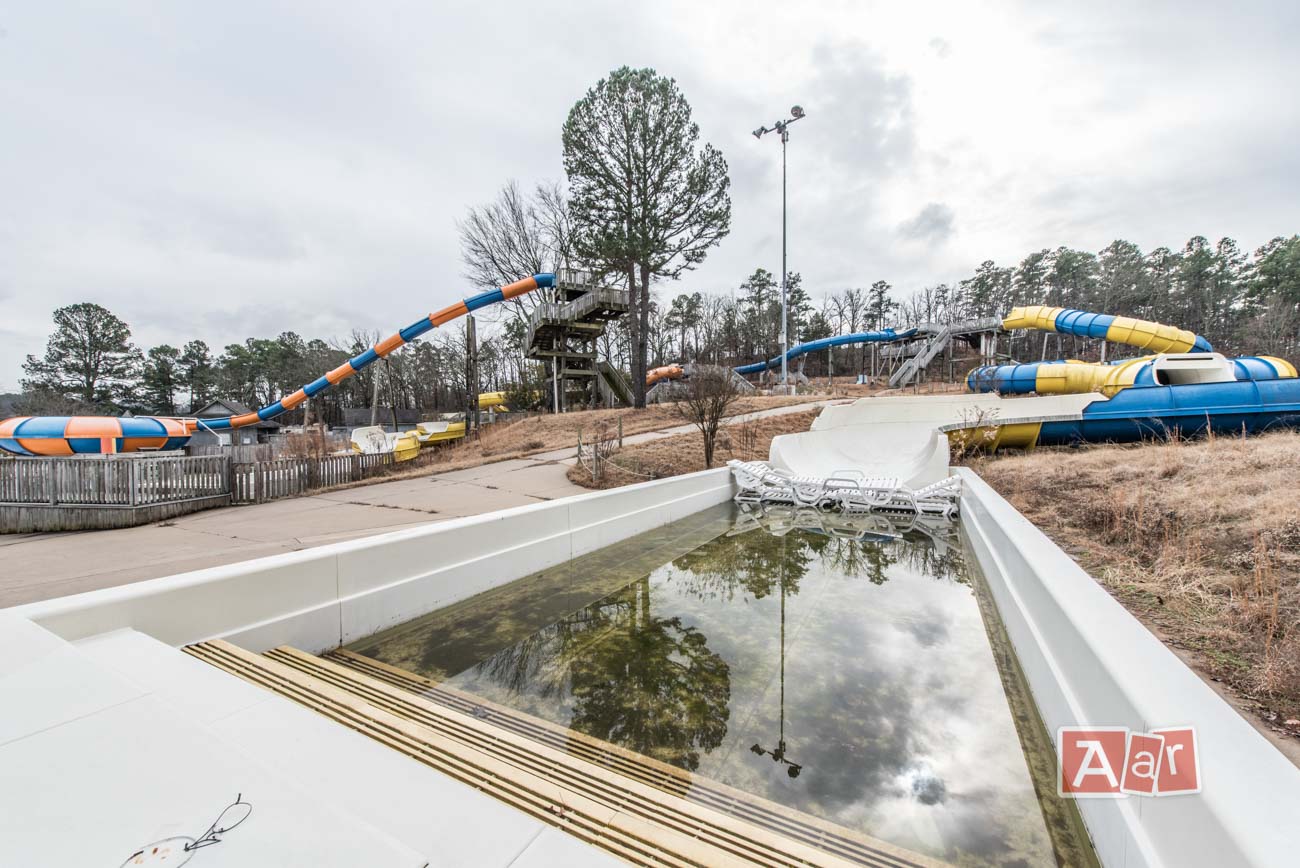 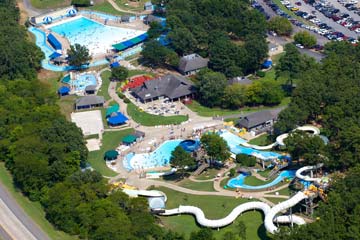 We have fun and exciting attractions in the great outdoors. Wild River Country, a 26-acre park offers a fun-filled day of non-stop fun with thirteen attractions, party decks, three pavilions and a volleyball court.

Feel the thrill of speeding down 11 thrilling water slides, splash in the waves in our gigantic wave pool, ride the River Rapids or simply relax as you float around the lazy river.

Wild River Country held its grand opening season in 1985. It was such a big hit that the Baxtor Bulletin published an article “Oversight corrected; Arkansas now has an ocean, too” playing on the idea that Arkansas had every terrain except an ocean.

This water park had everything for a full day adventure for the kids and adults and was perfect for a hot summer day. At one time, there were over 1,800 people at a single time because of the various heatwaves. For a few years, they even had “adults-only nights” featuring alcohol and water rides. 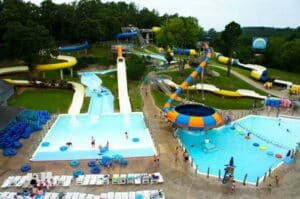 “Baptist youth group lock-ins! We would have the run of the place all night, lol. Hundreds of kids. This was late 80’s, early 90’s for me and it was always such a fun time.
Then, as a sixth grade teacher I spent several years chaperoning my students to a ‘School Days’ event in May as an end of the year celebration. Some of our students had never gotten to do anything like that before, so those memories are just as sweet for me.” – Lisa Cooper Lacefield

Arkansas School for the Deaf Program

From around 1999 to 2014, many of the students from the Arkansas School for the Deaf in Little Rock would visit here and attended many events and programs. Former student, Jessica Bryan can remember a time when the school would provide passes for events and enjoyed what the park had to offer. “We go swimming and to many other activities that were provided. My friends and I would go every summer, I knew the school would provide those passes and it was something we all looked forward to.”

When Jessica remembers her time having fun in the sun, she always recalls her friend Patrick. “I remember when I was 12, I went for the summer and my friend and I went to ride in the lazy river, We were enjoying our ride and I was afraid my camera would get wet and Patrick was able to snap of picture of me while I was signing ‘NOOOOOOOOOO’, those were good times.”

Jessica reached out to us because it was important to her that the school gets recognition for its collaboration with Wild River Country. “It was really special to us and I will never forget my time there.”

“I recalled when I was in ASD High School when WRC was opening! We surely had many good times there during my late teenage years. Later, I worked as ASD Recreational Leader, I strongly believed that it would be very entertaining for young ASD students and I drove them there with other many staff members! Hope that someone is rich enough to buy and renovate. If yes, I hope future ASD students would have enjoyed like we did.” JR-Cheri Courtright mentioned.

The ASD always played a HUGE role in the park’s success with the original owners. Joey Piwetz can remember spending many hours in the ASD pool training hundreds of lifeguards.

In 2015, it was decided to cancel all further events for adults only when fights were breaking out. Chris Schillcutt, general manager of Wild River Country at the time, said their event started to get out of hand when n early 2,000 people lined up to buy tickets around 7p.m. Sgt. Brian Dedrick said an off-duty police officer reported the event was getting out of control before the doors opened at 8:30 p.m. According to Dedrick, officers reported a lot of drinking and “too many fights to count” at the event. Schillcutt said at one point a man ran up to a ticket window where a teenage employee was working and stole a stack of tickets. Police made one arrest for public intoxication. 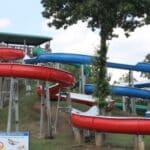 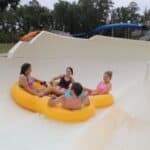 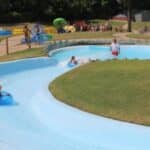 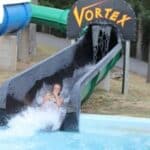 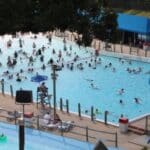 For the last decade or so, Wild River Country had slowly been lowering standards and seeing lower attendance, according to frequent summer guests. Closing in 2020, it might be thought that Covid played a role in its final closure and it did, somewhat. Since 2005, Wild River Country was facing a lot of financial issues and dealing with lawsuits. In January 2005, the water park was shut down by the state after failing to pay $170,000 in sales taxes and later that year, the then-owner of Halcyon Attractions filed for bankruptcy and listed $4.3 million in debts and $3.96 million in assets. In 2008, Union Insurance Co. sued Halycon for $16,224 in worker’s compensation. The same year, Community Bank sued Halcyon for the default on a loan of $2.5 million. Halcyon’s mortgage provider joined the lawsuit with Community Bank and requested $2.2 million for a defaulted loan. Both cases were settled out of court. In 2011, Entergy Arkansas sued the company for failing to pay its $38,133 electric bill.

Everything was looking back to normal in the late 2010s but in late 2019 a Pulaski County lawsuit was filed that says “Aquapark Holdings” owed $1.47 million on a loan that originated in 2000. Additionally, it owed $608,088 on a mortgage. This suit called for the foreclosure of Wild River Country and the property was put up for auction in 2020. With the 2020 pandemic on the rise, it’s a safe bet that the park would have had a significant loss. Shortly before the season started, WildRiverCountry.com took down their calendar events for the year. As of 2021, the property is still slated for the auction block.

“I just really hope that something can happen and it will be able to reopen. I noticed the slow decline and I wanted so bad to take it over so I could bring it back up to the way it was when I was a kid. It’s so heartbreaking to see what it looks like now, it just makes me want to buy it and do something with it.” – Former ASD Student, Jessica Bryan. 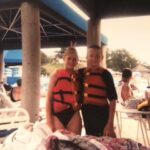 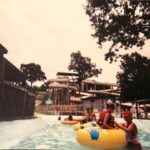 Even though there are plenty of lakes and water-related attractions in Arkansas, the hot summer days floating down the lazy river or going down “the Vortex” have come to a close.

Vandals have absolutely destroyed the place, all the slides are gone now

If I had the money I would buy it and rebuild everything and put effort into it sad it’s gone down the drain hopefully someone buy it & reorganized it .

They could of refund my money before the closed. I bought 3 season passes.

I went to wild river country with my sisters. We decided to go to the wave pull. So we at the deepest and the waves start. I flipped off the little board and sank to the bottom. The life guards did check on me til I got back up on my own. Mind you I can’t swim only float

What kind of idiot goes to a waterpark but they cant swim then jumps on in the deep end?

It’s 1992. I’m standing in line for the Lightning Bolt. I’m wearing my neon pink and black one-piece with the sporty zipper pull. Toad the Wet Sprocket is blaring over the PA system. I don’t really want to do this; I know where your bathing suit bottoms end up when you rocket off that near- totally vertical slide and skip like a rock into the landing pool. Everyone knows. It’s legendary. My brother has dared me, though, so there’s no going back. I’m lightheaded as I climb the wooden stairs to the landing at the top of the slide. My… Read more »

Season passes were dropped off at our house from Santa every year. My kids and I, along with our best friends visited 3-4x a week and all day on Sunday’s up until the summer before they closed. This was our spot! When they started letting things happen and people walk around with barely anything on it all went downhill. This used to be a super family fun place. My heart hurts for the future generation that won’t experience this little gem in our own backyard.

Dad took me here quite a few times as a kid. Hate that the place is wrecked and now closing down

I know I couldn’t help myself from getting angry then immediately sad after looking at these pictures. Why all of a sudden after all these years do these people get away with vandalizing this place?? Its not right nor is it fair?? People that destroy property like this that others have spent so much money on like its a joke or something should be in jail until they can learn how to be a functioning member of society. And do parents now a days not teach kids that this is wrong. Something seriously needs to be done about this. What… Read more »

No wayyyyyy I’m depressed now this was the best weekend get away.

Wild River Country- so many awesome memories from my teen years 😢. This makes me sad. Night swims were the best.

We went every year for several years in a row with my moms company. They would rent out the whole park. Me and all my friends (several of whom’s moms also worked there) would have a blast… accept the time I almost died in the wave pool. That was lame lol.

Awe so many memories at Wild River Country!
We had season passes every summer through child hood and teenage years! Had so much fun,made so many friends,so much trouble 😆and so many good memories 😊
Sad to see it in such bad shape! 😞

Someone probably already purchased it then COVID hit. So after COVID we’ll see.

Their hoping an entertainment company will buy out new owners & give it some major upgrades!

I spent every Friday night there as a teen. We mowed lawns so we could pay our way in. I went there for an all day pass and got so sunburned I had to wear my bathing suit for a few days. Then as an adult we took my dad and little brother who was visiting from Colorado and he broke his big toe on the rapid ride that was right by the lightening bolt. We had an awesome time every time we went. I am heart broken to see the state it is in now! If I had the… Read more »

I loved snorkeling in the wave pool collecting things from the bottom! So many memories, hate to see it this way!

I recalled when I was in ASD High School when WRC was opening! We surely had many good times there during my late teenage years. Later, I worked as ASD Recreational Leader, I strongly believed that it would be very entertaining for young ASD students and I drove them there with other many staff members! Hope that someone is rich enough to buy and renovate. If yes, I hope future ASD students would have enjoyed like we did.

the ASD always played a HUGE role in the success of WRC with the original owners. I spent many hours in the ASD pool training hundreds of life guards.

Yes, I was one of the Deaf lifeguards and we had a good time in our Arkansas School for the Deaf pool!

yeah we had fun with young group like me, Jay Cox, Kimberly M Knowlton,many friend at WRC and when they open in 1985 so we went there for three consecutive days on weekend. What a good memories!!!!