Mankind has always carried within himself the innate desire to shape and mold the world around us to our own personal desires and likings – even when the steps required in doing so are of epic proportions and huge in nature.  We build over-land canals in order to connect oceans.  We fashion massive levies so that we can change the courses of mighty rivers.  We create gargantuan dams in our efforts to create bodies of water where before there were none.  We erect towering bridges that connect opposing shores together to facilitate our desire to cross from one side to the other with maximum ease.

And we make buildings. 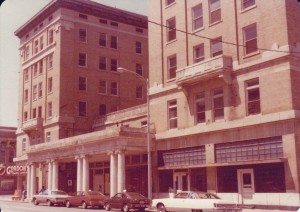 And while every building that we construct carries with it its own purpose, sometimes the purposes of our buildings are more grand and sweeping than at other times…and such was the case with the Hotel Pines.  Built in downtown Pine Bluff, Arkansas, back around the turn of the last century, the Hotel Pines was a conscious effort on the part of the more prominent citizens and business leaders of the community to shape and channel the flow of commerce in a way that might help to spread it from the city’s more successful areas toward its less established quarters.  Like most cities of that era, the railroad tracks that went through town did more than simply provide transportation – over time they also created and came to mark economic and societal boundaries within the town.  And since the Main Street sector of town north of the tracks was a thriving commercial area back around 1900, it was the Main Street property owners’ desire to extend the economically successful district to the southern side of the tracks, as well.  It was strongly believed that the added presence of a modern hotel in the middle of that sector would lure businesses into that region of the town and thus duplicate the success being enjoyed by the city on the northern side of the railroad boundary, as well.  So, in an effort to better direct, manage, and spur the continued growth of commerce within the city, the Hotel Pines was conceived of, planned, built, and finally completed in the year 1913.

Determined to duplicate the commercial success enjoyed by the northern area of the downtown quarter within the southern district, the hotel’s investors spared no expense.  Many of the county’s leading citizens became stockholders within the endeavor.  George R. Man, the architect who designed the Arkansas State Capitol, was selected to plan the new facility.  Paul M. Heerwagen, whose experience included work on such hotels as the Piedmont in Atlanta, was selected to decorate the interior.  And Arkansas Governor George Washington Hays himself delivered the principal address upon the hotel’s grand opening that November.

Highly successful in its purpose in directing commercial traffic to the southern portion of downtown Pine Bluff, the hotel was able to generate the economic success around it that had previously only been experienced in the city’s northern downtown sector.  Along these lines, the Hotel Pines successfully operated on this basis for fifty-seven continuous years.

A very profitable business venture for many decades, the hotel was dealt its initial death blow in 1968 when passenger rail service to the city of Pine Bluff was terminated.  The grand and eloquent hotel that had at one time successfully survived and ridden out The Great Depression of the 1930’s eventually found itself becoming an indirect victim to the rise of the same system of easily traversable Interstate super-roadways that had also laid waste to the passenger railway industry.  Thus deprived of its primary clientele, the historic hotel’s business quickly declined as it fell rapidly to never rise again.  The hotel that had managed to successfully operate for a very lucrative fifty-seven years quickly found itself going out of business, closing, and being boarded up in 1970, just two short years after the closure of the Pine Bluff passenger railway station. 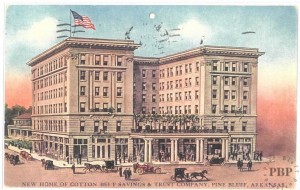 A few scattered businesses made periodic attempts at setting up shop and doing business within the hotel’s street front over the following years.  Retailers such as Gordon’s Jewelers, which set up shop there in 1981, have done their best to make a go within the otherwise abandoned building…though for the most part the hotel has remained sadly vacant.  The City Of Pine Bluff itself considered tearing the structure down in 1990.  This fate was narrowly avoided when a highly dedicated local non-profit group (the Citizens United To Save The Pines) purchased the aging facility, however.  The classically designed hotel, which has been listed on the National Register of Historic Places in 1979, once again fell into loving hands.  It was the group’s desire and purpose to both preserve the cherished Pine Bluff landmark and to restore it to its former state of majesty.

Over the next twelve years the Hotel Pines gradually began to resemble itself once again as the group cleaned the building, replaced the roof, installed new windows, and renovated the stained-glass domed ceiling of the lobby.  Desiring only for the hotel to live on and to enjoy the same prosperity that it had in decades past, in 2003 the group then sold the building to Davidson Properties (of Jacksonville, Arkansas), for a sum of just ten dollars.  At the time of the transaction, Davidson Properties had planned on spending eighteen months in completing the hotel’s renovations as it invested three million dollars into the completion of the project, their ultimate goal being to make the hotel available for offices, business suites, and seventy-five upscale hotel rooms.

Like many of the residents of Pine Bluff, noted city activist and historian Paul Perdue keeps an ever vigilant and watchful eye on the historic hotel as he seeks to serve as a steward of the aging facility’s cherished memories.  The driving force behind The Pine Bluff Desktop Museum, Mr. Perdue and numerous other residents of Pine Bluff continue to actively work together toward safe-guarding the Hotel Pines, watchfully keeping it guarded from all of the destructive threats and agents of the present day.  Working together, the residents of Pine Bluff continue to believe in the force of positive civic impact that the grand old structure most certainly remains capable of becoming within the city yet again.  Lovingly looked after and faithfully patrolled, the Hotel Pines remains the ward of the caring city that still very much treasures its continued presence. 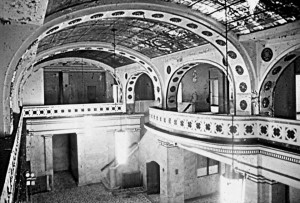 To date, the continued redevelopment and renovation as planned by the facility’s latest owner, Davidson Properties, sadly still remains on the drawing board.  The Hotel Pines, the city of Pine Bluff, and all of its people remain patiently optimistic and unperturbed, however.  After all, one-hundred years ago the Hotel Pines was built on the wrong side of the tracks in what would become a highly successful bid to turn that portion of the city around to become the right side of the tracks.  Yes, the hotel was built to serve as an agent of change toward creating and directing the positive flow of economic commerce within the city of Pine Bluff…and the structure rose up to become very successful in this grand and sweeping purpose.

It’s only a matter of time before the right people and the correct investors come along to enable it to thus rise up within the city once more.

Click on the Video icon in the Sidebar to see the Video!

I would love to go. Do u know what happened to the c.u.s.p?

Only the road and the dawn, the sun, the wind, and the rain,
And the watch fire under stars, and sleep, and the road again.

It is good to have an end to journey toward; but it is the journey that matters, in the end.What is that feeling when you're driving away from people and they recede on the plain till you see their specks dispersing? – it's the too-huge world vaulting us, and it's good-bye. But we lean forward to the next crazy venture beneath the skies.

I kept staring into the blackness of the woods, drawn into the darkness as I always had been. I suddenly realized how alone I was. (But this is how you travel, the wind whispered back, this is how you've always lived.)

I just don't understand why historic buildings aren't restored. In germany people have restored castles and other older buildings. My brother lived in the guards barracks of a 1000 year old castle that was made into apartments. Yes it took money but with grants and donations it is bringing in money and still being used to this day.

I am looking to get permission to shoot at Hotel Pines. I've sent a couple emails to info@abandonedar.com but haven't heard back. is there another way I could contact someone about permission?
thanks!

If I wanted to buy this piece of history who would be the person to contact? Please let me know as soon as possible.
Thank you

Please email us at info@abandonedar.com we will be glad to tell you there!