The well known Hotel Grim was once the “Crown Jewel” of Texarkana in it’s heyday. Built in 1924-25 and closed down in 1990, the hotel was filled with history and memories through the duration of its years in operation.

Hotel Grim completed construction in July of 1925 and opened on Wednesday, July 15, 1924. Designed by architects George Mann and Eugene Stern and named after William Rhodes Grim a prominent businessman in Texarkana. The hotel stands eight stories tall with 250 rooms at a cost of $600,000 to construct. The lobby remains a breathtaking sight even today and featured stone walls and marble flooring. The first floor housed the hotel’s café, the main dining room, as well as the famous Palm Court. The mezzanine held a beauty parlor, a barber shop, a coffee shop, a private dining room, and a drug store. Hotel Grim also had a beautiful roof top garden that could quickly converted to a large ballroom and accommodate many guests. Hotel Grim was the hot spot of Texarkana in the 1930’s hosting many parties for the rich, big name jazz bands, and was well known for having illegal card games for high rollers. 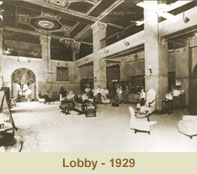 In 1934 radio station KCMC even established a studio inside the hotel.

In 1934 Bonnie and Clyde along with Henry Methvin were rumored to have made an appearance at Hotel Grim. An employee at the hotel recognized Bonnie from a magazine photo and stated that she came in to the hotel’s café and was sitting at the counter eating a sandwich while Clyde and Henry remained in the car. After a while Clyde became anxious and sent Henry in to retrieve her. Henry entered the café and pretended to be reading a magazine, when Henry and Bonnie made eye contact she then knew it was time to leave.

DOORS TO HOTEL GRIM ARE LOCKED. THIS LOCATION IS PATROLLED AND WATCHED BY THE COMMUNITY. fLOORS ARE FALLING IN AND MOLD IS GROWING EVERYWHERE. DO NOT GO TO THIS DANGEROUS LOCATION.

I just found an old silver spoon that is engraved with the hotel Grim… I believe it was my great grandmothers, and she was raised in that area… I live in Mississippi and had never heard of the place until I found this spoon

I’m sitting on the top floor at this moment. It feel great to be a part of this reconstruction. It’s such a breathtaking place, even in its current state. Can’t wait to see it complete.

Can I ask you some questions about the place? Im from txk and I’ve always been drawn towards that beautiful building

They are renovating it … its gonna be epic . They are turning it into apartments.

I was totally surprised. In sociology we learn that everything changes but change itself. Towns and cities move outward and eventually inward. We need to understand that in order to achieve progress in the down town area

hey look what i have, i have been there years ago. i have a envelope and stationary from there

Thanks for sharing info,it is helpful

Before applying for the home loan we need to research on which is the best bank for taking loan, how much it can provide, at what time wecan receive the loan, interest rate, marginal cost of funds based lending rates, processing fee etc. There are many major Home loans in Hyderabad like HDFC bank, IDBI home loans, Bajaj Finserv home loans, Axis bank home loan, LIC home loans, ICICI home loans and DSA like Shradda Associates

For our economy to truly rebound and do well we need more relaxed government policies and outlooks with regards to Private Equity and Domestic Investment.

My wife just told me of this site and this page. I want to say thank you for exploring and posting these pictures. The Hotel Grim was my childhood home for a long time and I have a lot of memories growing up there. This brought tears to my eyes but they were of joyful memories as well as sadness. I'm a Wounded Warrior with brain damage who suffers from amnesia and other memory issues I haven't been home since I can remember last. It was great to see the old place and relive some memories. I wish I could… Read more »

Private developer, Jim Sari has been working with the City for the last eight years on the Grim project and expressed his excitement to begin this project.

I wish that we would stop talking about refurbishing the Grim Hotel and get started doing it. We drove down town the other evening and there are cars all around the condominiums that have been made in several of the old buildings. I was totally surprised. In sociology we learn that everything changes but change itself. Towns and cities move outward and eventually inward. We need to understand that in order to achieve progress in the down town area

I wish that we would stop talking about refurbishing the Grim Hotel and get started doing it. We drove down town the other evening and there are cars all around the condominiums that have been made in several of the old buildings. I was totally surprised. In sociology we learn that everything changes but change itself. Towns and cities move outward and eventually inward. We need to understand that in order to achieve progress in the down town area, we must move forward. I have observed in my lifetime that when goals are set, plans are made, and progress begins…excitement… Read more »

I am elated to hear that the Hotel Grim has received the funds necessary to be refurbished (see prior post page 1 from another source). I only hope that the lobby and mezzanine are kept intact as the link states that the first floor will have a good many apartments. I must offer criticism as to your photographs, however. I couldn't help but notice a certain "artistic" placement of objects that your photographer took the liberty to move about. That does little to no justice as to what the Hotel Grim currently looks like if she arranges items to suit… Read more »

Hotel Grim Lofts Project gets loan guarantee assistance The City of Texarkana, Texas recently received approval from the U.S. Department of Housing and Urban Development for Section 108 loan guarantee assistance in the amount of $1,429,000 for the Hotel Grim Lofts Project. The goal is to redevelop the hotel with 98 housing units and commercial space on the first level. The financing plan is to use 108 funds from HUD along with federal and state historic credits, an EPA cleanup loan, conventional debt, and any other eligible sources. The proposal is for market apartments with apartments set aside of approximately… Read more »

I am widowed and looking to move to Texarkana and interested in renting a Loft apartment at the Grim once the renovation is completed. Do you have any contact information you could provide me? I would like to get on their list for a one bedroom. I realize the restoration will not be completed till 2020. Thank you for any information you can furnish to me. E mail: CarolGage2016@yahoo.com ; Facebook Carol Gage, cell # 903 701-1238, have text message. I currently live in Ashdown AR and plan to downsize and sell my home . Thank you, Carol Gage

Hotel Grim completed construction in July of 1925 and opened on Wednesday, July 15, 1924? Shouldn't that be the other way around? I love the Hotel Grim. I remember going next door to the book store in 1986. It was like looking into another time period with men sitting in the lobby reading newspapers and smoking cigars. I have photos of probably every floor and the roof.

Shouldn't that be that you went from the book store next door to the Hotel Grim?? JK Yes, the old men sitting around the lobby in oversized chairs of naugahyde (very comfortable, btw!) with newspapers and cigars was an integral part of the Grim's lobby. As were the standing ashtrays and spittoons. I remember it well.

A typical Romanian hotel at the edge of town, decorated in shades of red, yellow and orange. The staff don't really speak English but they managed to accommodate us in an adequate room and serve us dinner and breakfast. In fact the cheese and ham omelets at breakfast were particularly fine. If you just want a bed for the night…

there was a pl\

Have you seen this, oh man?!!! http://jkpotter.com/ghosts-of-the-hotel-grim/

Good news! There is a developer interested in the property with a solid proposal on the table. You can follow the latest news on our Facebook page.
https://www.facebook.com/SavetheHotelGrim