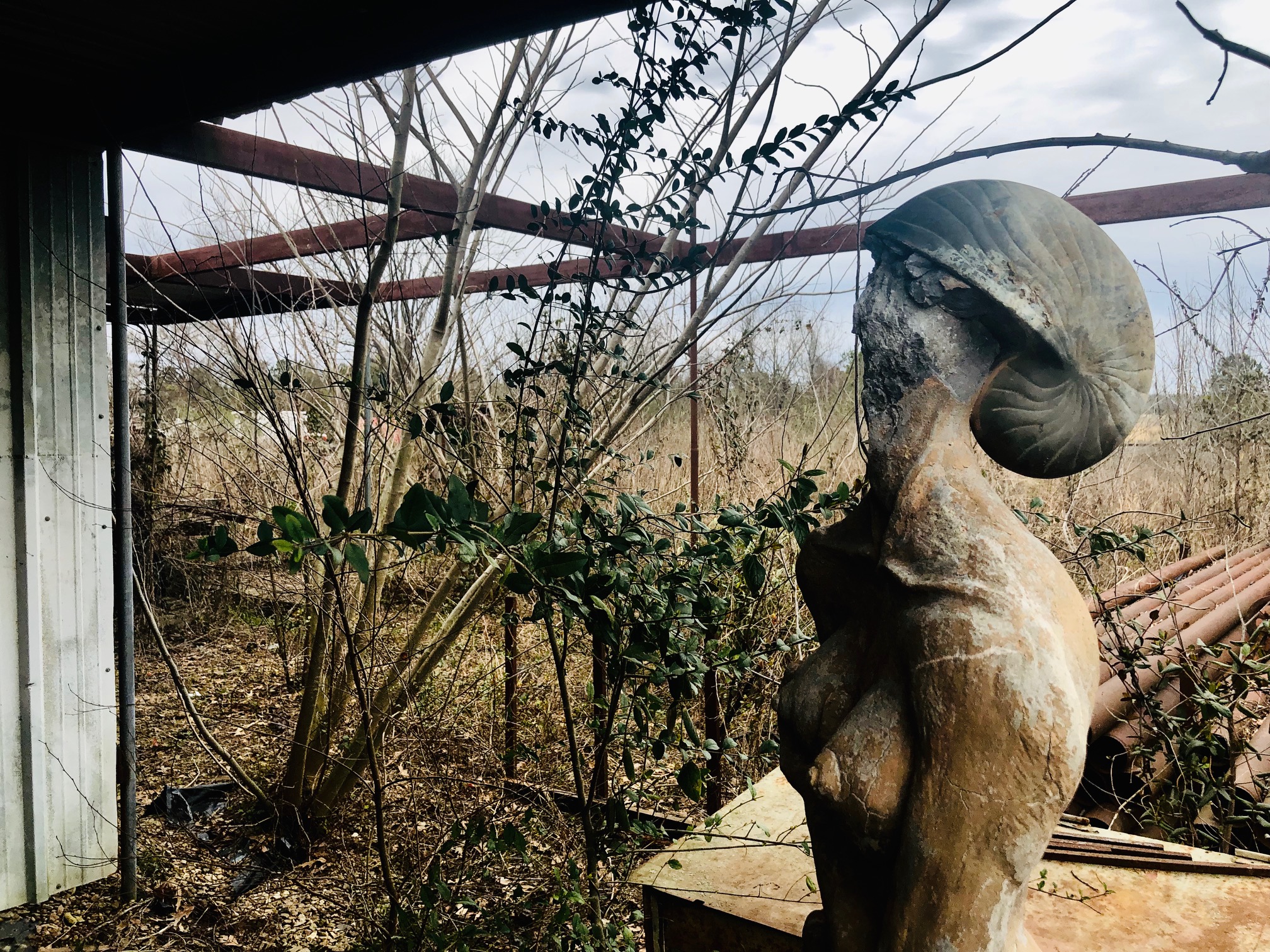 When I sought for the sculpture garden one Sunday afternoon, it was warm for the week, after storms had raged through Arkansas and brought in a bit of weather. I expected it to be a bit hidden, but as I approached the address, I realized it was literally feet from the highway. I parked my car in a slim drive and waded through the grass to get the final looks at what remains of what was once a massive garden of offbeat and risqué sculptures. Most of them had been removed, hopefully from what I assume to be rehomed and saved. Only one non-metal piece remained… the remnants of “Cosmic Love” a sensual and graphic image of a woman, the face of ecstasy now obliterated by weather or vandals.

As I’ve researched more about Mr. Shaw, including reading his own words online via his blog, I am more and more sorry I did not get to meet him and walk through the sculpture garden when it was in its prime. I hope the pieces have found new homes, and I hope those I’ve documented here bring joy to those who still see them.

“I am 63 years of age and I want people to get to know me through my own words. I don’t, as any of us, know our last day on this beautiful planet, and I prefer you not getting to know me through the words of possible biographers.

I know that probably sounds a bit hubris to even think that someone would be interested in writing about me someday but, I do believe it will happen and then the biographer can say ‘That guy was so hubris’, and then write whatever else he or she wishes to say.

Writers are very creative so I don’t think that whatever I write about will create too much of a problem for them.” –Finton Shaw, May 27, 2010 in his first blog entry at http://fintonsculpture.blogspot.com/

[Artist Finton Shaw] was born in Little Rock, on Oct. 26, 1946, and grew up primarily in England, Arkansas. After graduating in 1965, he enlisted in the United States Air Force and served until 1969. He returned to Arkansas and lived in Little Rock until 1982 at which time he moved to Conway, and started his own structural steel business. Over the years, he developed an artistic ability that led him into sculpting and various mediums of sculptural art where he was recognized with many achievements.
Finton possessed a special warmth about him; he never met a stranger. He handled everything in his life with strength, compassion and sincerity.  -Finton Shaw obituary

Shaw, a structural steel wielder, began sculpting metals in the late 1990s after he was injured in a fall from a building while working. Later he suffered four heart attacks, forcing him to work part-time.

While nursing his injury and improving his health, Shaw sought therapy in creating light ornamental iron pieces, such as elaborately designed gates and fences.

After only a few years, the self-taught sculptor worked to complete more than 50 metal and wood sculptures ranging from four feet tall to 20 feet tall, displayed for the public in his sculpture garden on two acres of land near Cadron Ridge.

Like his garden, Shaw wishes the city supported more private or public art projects that would grace the city’s landscape for the more than 40,000 residents in Conway to see.

“Art stimulates and teaches tolerance,” he said. “It can have a healing effect or it can create food for thought. Yes, some people may be enraged by it, but at least it will shock them in addressing an issue.”

Shouldering the artistic responsibility Shaw said local artists must shoulder most of the responsibility of supporting and providing art for Conway, not city officials.

“There are a lot of really nice talented artists who have been content to show (their art) at the library or bank,” but not many have tried to open a gallery of their own, Coyne said. “My goal was to bring art to Conway in a more open way.”  -excerpt from “Group hopes to forge new views on art in Conway” by Michael Frazier, Sunday, December 01, 2002

Unfortunately his Workshop burned down a few days or weeks ago.

I can’t believe they let it go down like that. I remember Mr. Shaw he was a character. His art was amazing

Wow, so so sad to see this fall into such dispair yet why doesn't the city council members vote to make something come out of this for the good or Faulkner County Historical Society my gosh please don't let it just continue to Rot.

So sad to see it abandoned. RIP and Thank you for your service.

Wow, so so sad to see this fall into such dispair yet why doesn't the city council members vote to make something come out of this for the good or Faulkner County Historical Society my gosh please don't let it just continue to Rot.