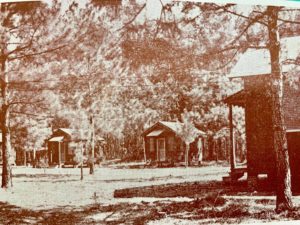 About a mile outside of Crossett, an old gated logging road now stands on what was once a finely kept drive leading into the old Crossett Yale Camp. Located in the beautiful pines of South Arkansas are eight small bunkhouses, a shower house, and a kitchen/dining area. Located in the dining area of the camp, is a large fireplace as the main point of the room, and painted in the Yale blue color, a “Y” as the camp’s main logo. The dining hall also served as a lecture area for lessons on forestry, as well as where students relaxed after a long day of research.

Yale Camp was built in 1946 by the Crossett Lumber Company after many years of Yale University coming to the area to study forestry and not having a permanent area for camp. Prior to the camp being built, students lived in sawmill dormitories across the county. When construction to Yale Camp was finished, the camp could accommodate as many as 24 students, although as a study group, usually only a group of 15 or 16 occupied the camp. Students came to the area to study forestry for many years until the camp closed in 1966 due to students becoming less interested in spending eleven weeks in a remote location so far from home.

Students came from areas ranging all the way from Canada, Australia, Africa, South and Central America, as far as Iraq and various American States. 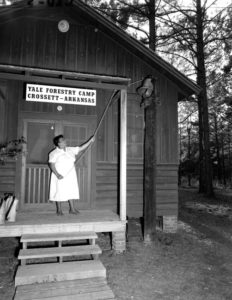 Although Yale Camp didn’t serve as a research facility anymore after 1966, it was still used as a camp for Girl Scouts, church functions, and many family gatherings as well. Many local families have shared their wonderful experiences at the camp for many summers that have passed. It was sure a great place to spend the day and learn from Girl Scout leaders, or just a place to relax and have good family fun with everyone. 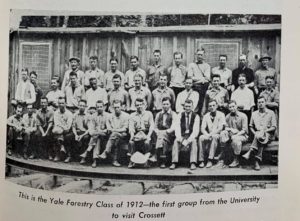 Privately owned by a large company in Crossett now, the camp still stands and is in somewhat great shape. If not kept up though, it could soon just be a memory of the past for many students and residents of Crossett, AR.

If you have any stories or photographs of time spent at Yale Camp, please feel free to send them in.

Please remember the camp is gated off and trespassing is greatly discouraged.

Crossett City Council is debating on whether or not to move the buildings from their current location into the city limits.

I would love more info on this camp Is it available to be reserved?

Took lots of girls there for Girl Scout events.

The Yale forestry connection to this place continues, though not as frequently. After the official Yale camp experience ended Yale's forestry program went back to an older tradition, a tour of southern forestry. The tour, while only infrequently traveling to Arkansas, continues to this day. On Friday March 8 2019 a group of 13 Yale FES students leaves New Haven for an 8-day study tour of south Georgia and the Florida panhandle. I'm the trip leader, and have been involved with such trips since 1980 (as a student) and frequently since 1996 (as a part-time lecturer). March 8, 2009 was… Read more »

You guys gathered here at the Yale Camp in Crossett? Interesting! I did not know it was used at that point. Please email me more info if you can. bmpconvoy1@gmail.com

My Dad went there as a student in 1949 after the war was over and he was discharged from the USMC. Was offered a forestry job with Georgia Pacific. Went back home to Minnesota, married my mom and came back to Hamburg Arkansas. I can remember the reunions with the graduates in the area and the students. Softball games and pick nicks. I have many fond memories from 55 years ago of the old Yale camp.

Interesting place. It has a Friday the 13th feel to it. Thanks.

I took Girl Scouts here for over night camping!!

wpDiscuz
9
0
Have history here? Would love hear your stories or your thoughts.x
()
x
| Reply