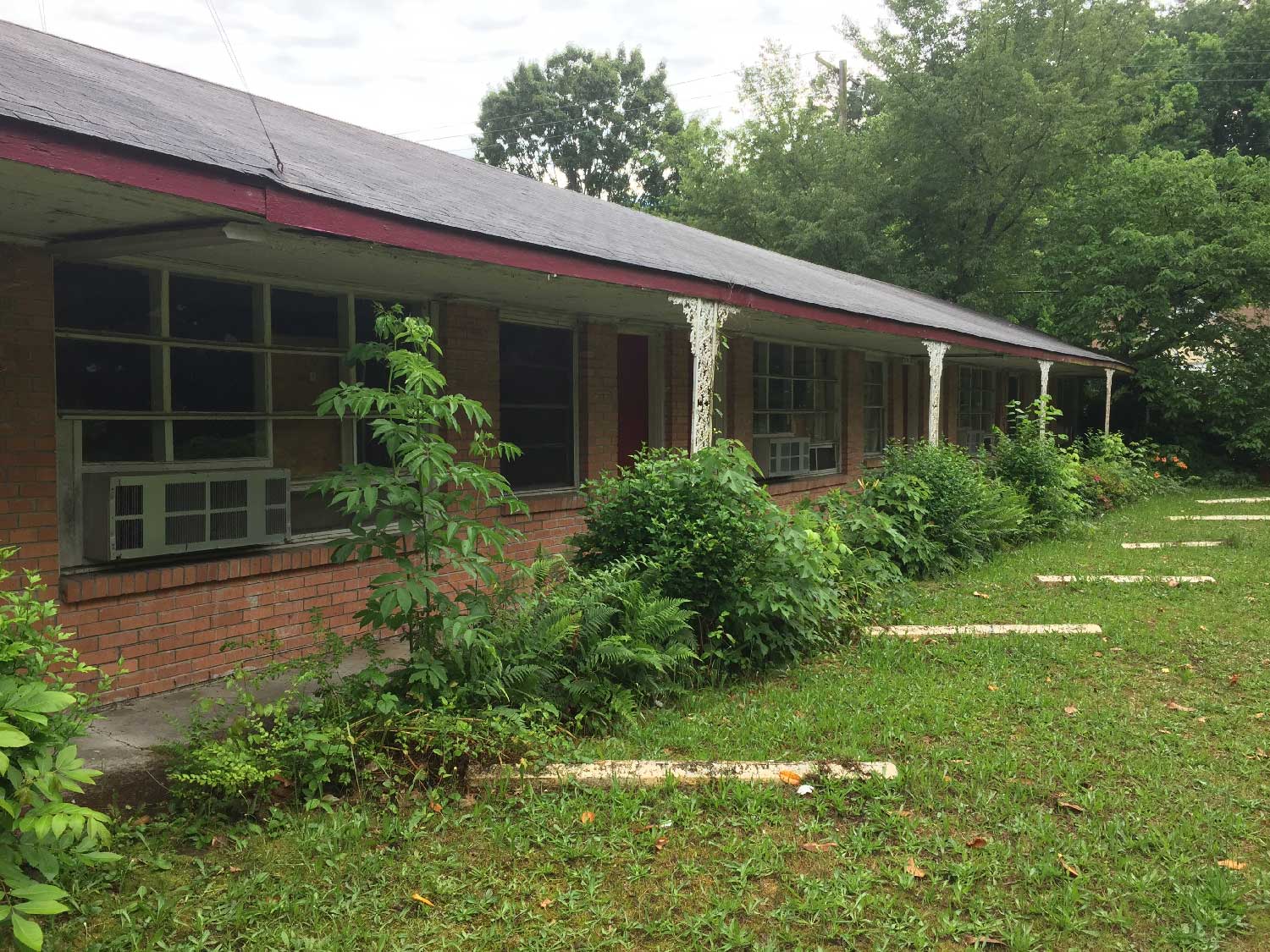 Decades ago, at the dawn of the twentieth century, travelers from Little Rock (Pulaski County) and other cities to the north of Hot Springs became very familiar with Park Avenue as a crucial part of their route to the bustling tourist town that was quickly become a hot spot in the south-eastern part of the nation. Service stations, lodging, and many other amenities cropped up along the road to serve these visitors on their journeys. Cottage Courts (or Court) was constructed in the later part of this time period by Cecil Foster and James McLain. It was uniquely designed as a motel rather than the traditional tourist court as many counterparts had been in Hot Springs. Garnishing a sense of community and comfort, the units were joined together rather than built as separate structures. A commodity that was also present like in many tourist courts, however, was a shared green space.

Delving into the layout of Cottage Court, visitors can see that the district contains two ranch-style buildings with a total of fifteen guest rooms. The larger of the buildings contains twelve rooms, while the second building includes three rooms in addition to an apartment for the manager. The buildings gaze at one another across a parking lot with a small green space in its center. Each unit contains a single door and a window that overlooks the activity in the parking lot and the central green space. The hipped roof overhangs the front of the buildings and is supported by painted wrought-iron posts with a decorative vine pattern. The overhang and posts house the porch in front of each unit.

Each of the guest rooms have a bedroom at the front of the unit and a bathroom located at the rear. A small window resides in the bathroom for some ambiance. At the time of the nomination to the National Register in 2004, window-unit air conditioners were present in each guest room.

Sadly, by the time Cottage Courts was constructed in 1951, the popularity and use of the hot springs located in the city was already on the decline. Many visitors of Hot Springs chose to stay closer to the lakes that were located to the south of the city. Lucky for Cottage Courts, it was able to stay afloat, most likely due to the updated nature of the buildings. The shiny new freshness of the motel made it more popular with visitors and travelers than the older, more traditional courts.

Growing up in Texas, Andie Roberts and her family would often travel up to Hot Springs for family vacations. Roberts has a deep-rooted love for the beautiful town and after graduating from college in Nashville, Tennessee, she decided to return to the sight of so many of her treasured memories. Since she was twenty, Roberts has always had the urge to buy old motels and fix them up. Before purchasing the old Cottage Court, she had traveled to Hot Springs to negotiate buying a different property. Roberts wanted a sign, something from the universe to tell her that she was meant to help restore the rich history of Hot Springs, and that’s when she stumbled upon the long forgotten boarded up Cottage Court motel.

Shortly after she closed negotiations and began thinking about the restoration of the old motel, a visitor from the Cottage Court’s past appeared searching for the old building. Roberts learned that this woman had stayed at the original Cottage Court when she was a child and has been searching for it ever since. It’s stories like this one, and the amazing history that the people and the places of Hot Springs have to offer, that Roberts wants to preserve. Thanks to her efforts, Cottage Court was restored with its original name and offers top of the line customer service and personality that you just won’t find at your average everyday motel. So if you’re in Hot Springs, check out Cottage Court: staydamefortune.com/

Mention Abandoned Atlas to get 10% off your stay!

I am so glad that it was saved. Thank you for saving it.

In December 2017 a friend and I photographed the remains of the Nebo Lumber Company in Dardanelle. I have a slide show power-point that I’ve presented a couple of times. I can put it on a thumb drive and send to you if anyone would be interested. I also have another presentation on the ghost town of Kanona, Kansas. I realize that’s not in Arkansas.