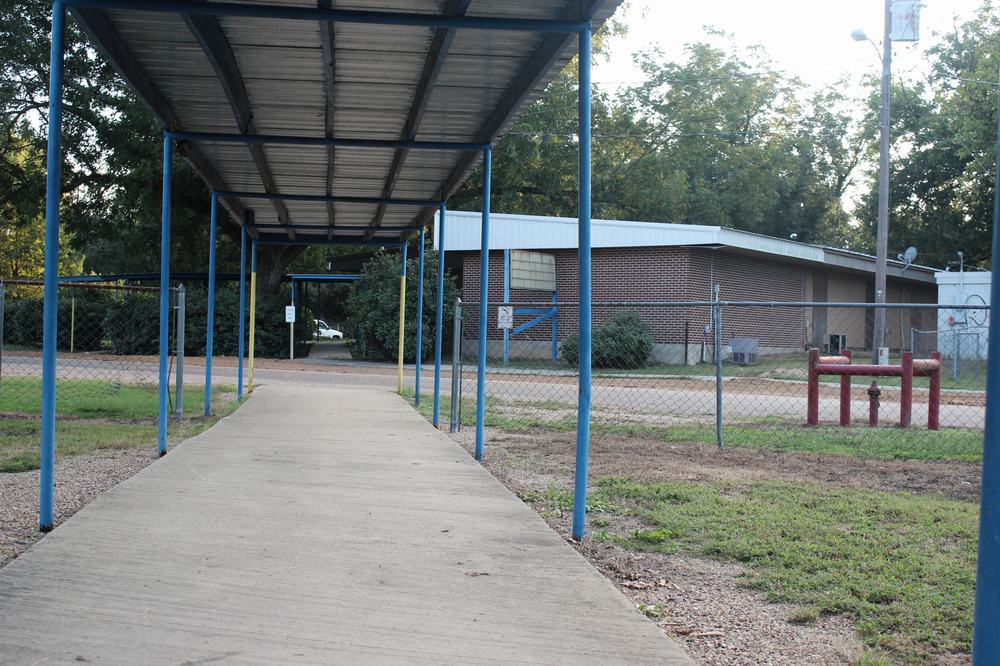 The Winthrop school museum is located in the two-story brick house building in the middle of Winthrop, AR in the former high school.  The town of Winthrop is located in the Little River County in the extreme southwest corner of Arkansas. The Winthrop school museum is significant because of it’s educational association with the community. The building is also historically significant because it is a representation of a rural school building in the early 20th century.

Construction started on the Winthrop school in 1912 with completion in 1913. It was built to replace a three room rough plank building which had previously been a school, located on the same site and to accommodate Winthrop’s growing population. According to the Little River County deed record books, on September 19, 1908 Lizzie Black and W.A. Black sold one lot for $12.50 to the directors of the school district number 12 of Little River County, Arkansas. On October 5, 1908 Luther Jones sold two more lights to the directors for $25. The school currently sits on lots 1718 and 19. The Winthrop school building was in continuous service from 1913 to 1992, beginning as a primary school, then expanding to include all grades, with its first graduating class in 1927. The school closed when it was consolidated with Horatio school district in 1992. Local community residents rallied together to form a preservation committee organized to arrange for the local community members to donate artifacts, documents and photographs depicting the life in Winthrop from the early 1800s to present day. All of these items are now housed in either the museum room or the veteran’s room. The veteran’s room pays tribute to local veterans who served in the time between World War I and Iraq with a collection of photographs, personal letters, uniforms, planks, and other various newspaper clippings. Due to the efforts of the local preservation committee, the Winthrop school museum was added to the Arkansas Register of Historic Places on November 7, 2001.

The Winthrop school building sits on a continuing brick foundation. It is a two-story, symmetrical mast, brick building in the restrained version of the colonial revival style, with an almost nearly square plan. The exterior of the building lips today much like it did upon completion of construction in 1913. Interior updates were completed through the years to combine original classrooms, replace wooden doors with aluminum ones, as well as replacement of the original two over to doubling hung what frame windows with aluminum frame windows. Which excluded the building from acceptance into the national register of historic places. Electric wiring was installed in the 1920s. The heat system was changed from the wood-burning stove to butane.  Unique features include concrete walkways displaying the names of graduating classes and their teachers from 1927.

this school looks really nice! so sad there are no courses and lessons with new knowledge

Winthrop school system is a good chance to getting an education. The education system is very important in every field. I appreciate for this school system which starts good opportunities for the student. You can visit dissertation formatting to get new education ideas.

I am using this abandonedar blog for more updates winthrop school system ways to college students can make money really very helpful. Mostly with professional writing companies about strapped for cash most of the time educational points always,thanks.

That moment when an abandoned school has a nicer bathroom then your school .

The arrangement of your letter of proposition will need to change contingent upon what it is really going after, all commercial ventures or organizations work inside of the same parameter and accordingly your letter will need to oblige their prerequisites.proposal letter for partnership

Here is a uncomplicated, rapid, and also effective strategy to generate plenty of interest for ones chiropractic process. Do this today, and also there's no question you will generate a pleasant influx of completely new affected individuals.

Seeing this just broke my heart. I can still smell the way that gym smelled! I remember plays and events and being up on that stage with the thick, heavy blue velvet curtain. I remember the concession stand and getting single sized pizzas and sodas and popcorn! I remember the feeling of playing basketball in that wooden gym floor…nothing like it! I remember classes in the old Elementary and the heavy wooden doors that sealed off each room from the hallways! The stairway that led up to 4th, 5th, and 6th grade! The library just past the stairs!! That smell… Read more »

So sad to see so much destruction to the gym. Why was the beautiful floor removed? Why was it cut in so many small pieces? Two of my sons played in that gym, and I attended games there for over twenty years.

the old wooden floor in the gym, they pulled it up and used it in the nwe high school in Horatio on the stage in the gym. It looks realy nice, you ought to come by sometime and look at it

Is Daryl Reese your son?

Winthrop was my first coaching job. I was there from 1978-80 and it was a great start to my career as a coach. I am still coaching today, but those days in that small town and school will always have a place in my heart. Thanks to my second mom Nelda Hess for always taking care of me!

This is great! Glad to see something being done about this facility. Is that concrete under the hardwood in the gym? If so, that will make restoration much easier.