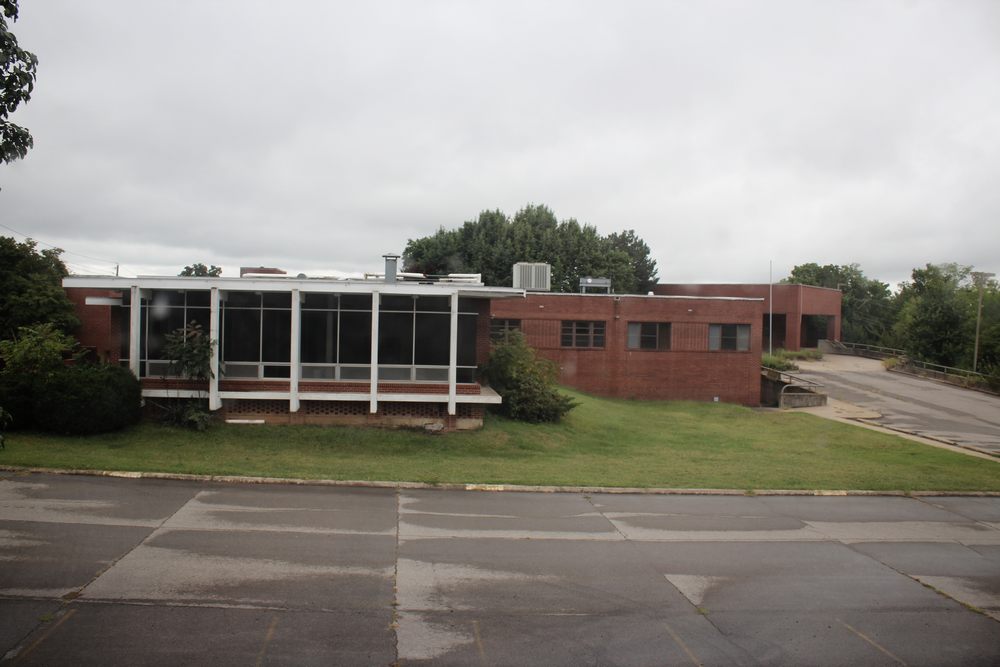 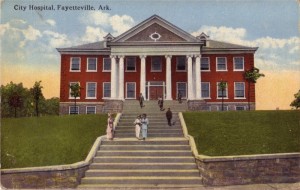 One could be forgiven for mistaking Fayetteville City Hospital for a small school. Built in 1912, the two-story brick structure does not call to mind the modern, towering concrete of a building like UAMS. Looking at the building today, in heart of Fayetteville, it seems almost stuck in time; the beautiful columns and brick architecture do not reflect its surroundings and the library across the street could make one believe a school bell could come from the warm, inviting windows and halls.

What stands today, however, is in fact a hospital, and its unique history of renovation throughout its lifetime provides a collage of different time periods it lived through. Renovated six or seven times (depending on who you ask), many rooms contain some of the original 1912 architecture as well as the architecture of each time period it was renovated in. The story is similar for the small building next to it. Originally a church built alongside the hospital, the building was re-purposed in the 1950s as a home for the nurses working next door. It later became a storage and recreational area for the hospital. 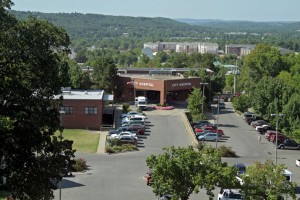 Beautiful and inviting on the outside, these structures that once cured and saved the lives of hundreds of Arkansans is now, sadly, in shambles. Worse, there is a major infestation of black mold growing in the basement and top floor. Though much of the building’s interior is in ruin, there remain several rooms that do not appear to be touched by time. Still glowing with bright murals and children’s drawings, these serve as a reminder of the service the building offered for its ninety-nine years of service, twenty of them spent in the Senate Cidery of the Washington Regional Medical System.

The building was abandoned in 2011, official reasons being “The timing of the finalizing of a long-term plan for the hospital and the age and accelerated deterioration of the physical plant.” There was also reportedly a problem with the deficiencies in the building code, 17 found in 2011 alone. Currently, the building is owned by the Fayetteville Public Library System who reportedly plan to demolish the building and repurpose the property into an auditorium for guest speakers and book signings.

With this in mind, we hope that these pictures can serve as an adequate portrait of this incredible, once proud house of healing.

I worked there from 1996-2001 and hated to see this all shut down, I think Washington Regional failed on the upkeep on it, so sad, this place had a lot of meaning to a lot of people.

I had the honor of being born there and six years later having my tonsils and adenoids removed there, as well as visiting my Dad and maternal grandmother, while they were hospitalized there.

I recently contacted the Fayetteville Library Director about filming there for a school project. At the time of writing, October 17th 2016, the location is NOT owned by the Fayetteville Public Library, it is currently owned by Washington Regional Medical Center, and they are currently trying to clear a title so that the land can be sold. The case is before the Arkansas Supreme Court. Of course, there are still many entry points for people to get in.

By now you probably know that the property was FINALLY sold to the public library. The building will be razed and will be replaced by an expansion of the library that (we hope) will satisfy its needs for the next twenty or thirty years.

It actually closed august 31, 2012 not 2011. We had just celebrated our 100th birthday. I had the pleasure of working at Fayetteville City Hospital from 2000-2012. I was there until a week after the residents were all gone. I will forever miss that place.

I worked there from February 2008-December 2011. I had great bosses and wonderful coworkers. If you were there you only felt how comfortable people were and how we loved each other like you would love a family member. I took it as opportunities that were given to me to help me and made me the person who I am today. I was just 19 of age when starting there but learned how to care for others and that's something ill never forget

I had the honor of being the Administrator of FCH from July, 2000 until it closed on August 31, 2012. During the latter days, the building wasn't as pretty as newer facilities, yet the staff there were wonderful and gave the best clinical and the most loving and respectful care!! Many employees formed lasting relationships with eCh other, the residents and their families that are still strong today. The legacy of caring at FCH will carry forward to honor the 100 years of health services provided there!

Has it been taken down yet? Are there plans to re-cycle an re-use whatever they can? I hate it's being demolished, but even worse if they don't try to recycle/reuse the brick, and so many other things… I hate it when history is thrown away for progress…

Most of those pictures (if not all) were taken after Aug. 31, 2012, I saw the North Solarium and the Gardens that our Masters took care of. Thank you for sharing your time and work to make our grounds beautiful. That's what I want to see pictures of. When She was at her best. Not after the Newshounds got hold of Her.

When I was a child my mother worked at City Hospital and she took me to the top floor where there was an old time fire escape. It was like a 3 story metal spiral slide. She said in the day they would wrap patients in blankets and "send them down" to some one waiting at the bottom. I so wish they could've saved the building. Wonderful memories. Father of my oldest child was the last baby born there.

My grandmother received some of the best care at this hospital/ nursing home. Some good history there

I worked there (the open part) for a little bit, you have to go to the abandoned part to fill oxygen tanks…… One word – CREEPY! Feels like there are always eyes one you….

Is this the one featured on American Picker a while back?

No, your thinking of the Old Paris Hospital in Paris. Check it out here! https://abandonedar.com/old-paris-hospital/

My wife and her twin was born in this hospital in 1949. It service the community well for many years. Time to move on, however.

Currently there is an issue with the property deed. Originally the property was deeded to the city. Around 2012, the city deeded the property to WRMC (the organization that ran the facility). The library wants to purchase the property from WRMC. However, the original documents state that if the property ever ceased being a hospital, it reverted back to the city for "use for the public good" (like the library).

I've been away from actually living in this area for a while. I didn't know the hospital had closed. Thanks for preserving in pictures…..

They had a hall that was shutdown when I worked there. It had been shut down for years. The only time anyone went on it was when we needed oxygen or something extra. A lot of people would scare the crap out of you when you went up there. It's connected to everything else, yep separate at the same time. Dark and creepy! They'd always put a statue person in one of the windows at Halloween! Sometimes they just left it there! Lol