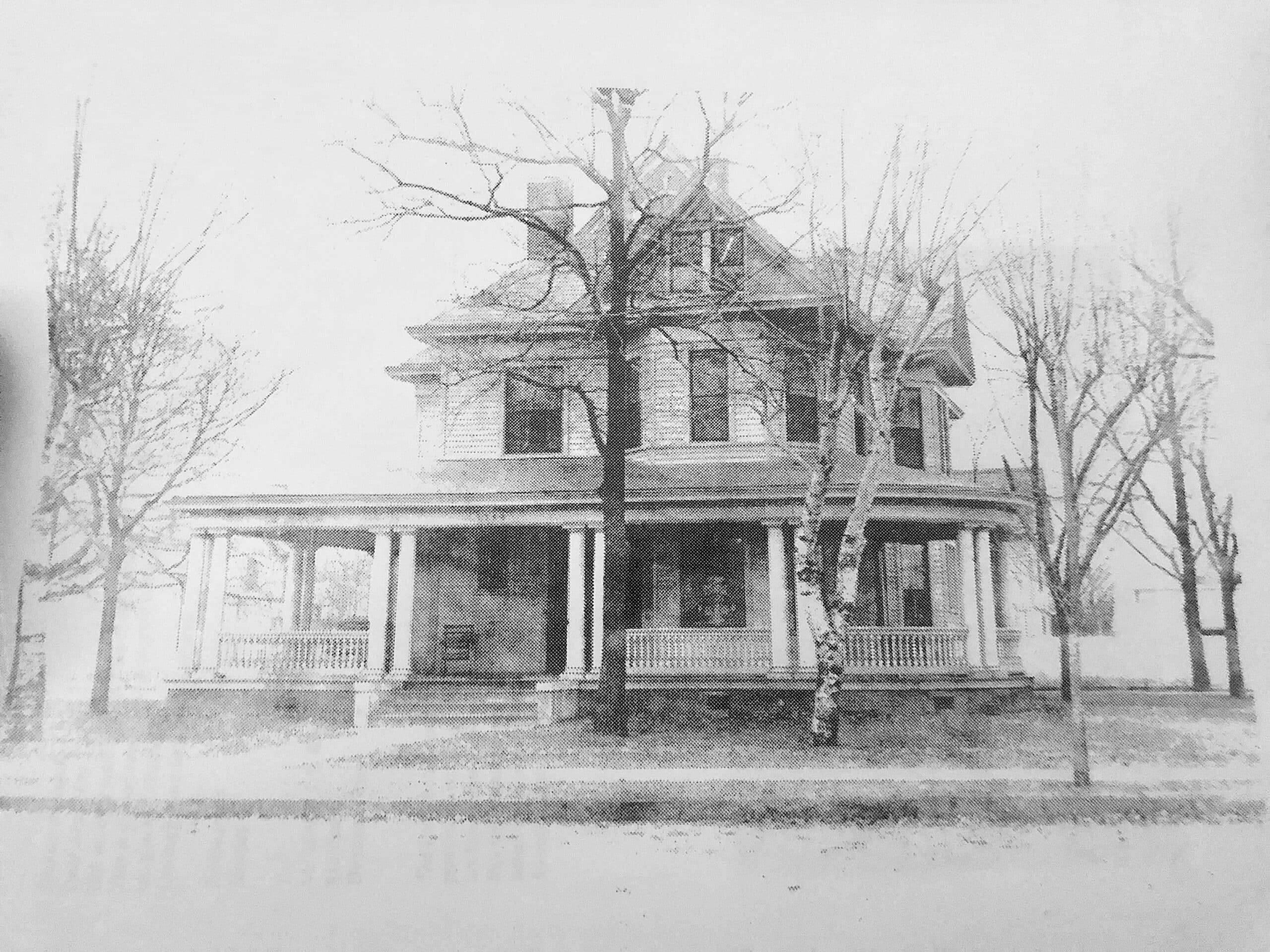 Every family has a history, but some families seem to have much more sordid and tragic events that have lasting effects on people and places; such is the case with the Fee Family. Love, betrayal, lust, lies, accidents, suicide… the list of scandals and sorrows is long and varied: the perfect recipe for a good, old-fashioned haunting.

The history of The Fee House itself actually begins before the prominent family purchased the home in 1907. It was built circa 1892 by the first owner, Sebastian Virgil Hafer, although little records have been found detailing the Hafer Family history. The home was purchased by the E.B. Pierce family circa 1906 and almost immediately following in 1907, was sold to the Fees.

Frank F. Fee was a prominent Arkansas lumberman born in 1860. His father, a Civil War soldier, was of Huguenot lineage (Huguenots were French Protestants of the 16th–17th centuries. Largely Calvinist, the Huguenots suffered severe persecution at the hands of the Catholic majority, and many thousands emigrated from France); his mother was the granddaughter of General Bruce of Revolutionary War fame. After graduating from Fort Wayne high school at age 13 and Oberlin College at 18, he was admitted to the bar at the young age of 21.

A lover of nature, Frank Fee’s knowledge turned him to forestry and then the manufacture of hardwood lumber. He devoted his life to the industry until his health began to fail around 1922. He was a 32nd degree Mason, a member of the Quapaw Club, the Little Rock Country Club, the Rotary Club, and an honorary member of the Lumberman’s Club of Chicago. Years before he moved into the house on 1900 Broadway with his wife, Mamie, he was married to another woman, with whom he had three children (some letters list four: three daughters and one son) .

Mamie Kone became Frank’s second wife amid scandalous circumstances. As both Frank and Mamie were married to others, they subsequently divorced within the same year to marry one another immediately after. This news “although of a sensational character” did not surprise many who knew the couple to be involved. The first Mrs. Fee “was granted a heavy alimony and custody of her children.” Mamie divorced her husband, a Mr. Matthews who was another prominent lumber merchant in Chicago and was part of very high financial society circles.

Granddaughter of Mamie, Patricia Bell, recounts Thomas’s wife telling of her: “Mrs. Fee was . . . a true Southern lady. I am sure she must have been that and much more. I have two or three very witty letters which she wrote to a sister-in-law.” Mrs. Bell also adds: “Among the things I remember about my grandmother were her small feet. She wore a size 1 shoe. When I was nine . . . when girls would come over to play ‘dress up’ no one could wear the shoes of either my mother or my grandmother.”

Before their final move to Little Rock, the couple had three children while living in Ohio and then Houston, Texas: Frank Jr., Katherine, and Edward. After the move to the home they had Thomas and finally the youngest, Patricia.

The scandals continued after the couple moved into the Broadway home, as the fourth child Thomas was rumored to have been potentially fathered by a servant who cared for the home and grounds and lived in the carriage house. One can only speculate the accuracy of these rumors, although it is seemingly odd that Thomas was the only child of the five Fee children who’s room wasn’t a large upstairs bedroom, but was instead behind the library on the sun porch; even more telling was that he was  sent to California to live prior to enrolling in high school, where he remained after graduation and into adulthood. He was successful and popular, being referred to as a “ladies’ man, class actor, and vainest.” He was also distinctly labeled as “a lion among ladies.” 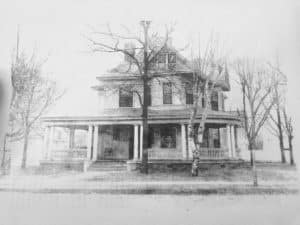 January 1908. Postcard from a young Katherine fee to her aunt and uncle. “Dear Aunt May. Did we ever send you a picture of our house? This is a good one. I wish you could come see us, you and Uncle Jim. Lovingly your little niece Katherine”

Accidental or tragic death seemed to follow the Fee Family. Frank Sr. seemed to have the most normal “accidental” death. In 1922, at 62 years old, he was on a business trip to Michigan and suffered a fatal heart attack.

Nine years later in 1931, however, a much more tragic end came to the matriarch of the family, Mamie at age 56. According to an email from her granddaughter Patrica Bell, daughter of Katherine,  (pictured right) Mamie was  in her dressing room one evening:

“We had an open grate (for heating the room) and my grandmother had washed her hair and she was in her nightgown drying her hair, over the stove — her gown caught fire — the made [sic], Amelia, was the only one with her — she rolled her in a blanket, to smother the flames. She was burned — she would tell no one. Edward was to be married at that time, and she didn’t want to spoil his marriage plans, so she kept her plight to herself. After the wedding she got so bad, she did go to a hospital, for the burns, but it was too late. From this she died. She was a good Christian Scientist — many the time she would call someone to pray that I would get well. Maybe that, too was a reason she didn’t go to the hospital sooner.”

After the shock of Mamie’s death, the family was clearly distraught. Less than a year later in 1932, daughter Katherine, age 28, died by drinking poison. The newspapers reported this horrific death as a “mistake,” claiming Katherine said she had a headache while she, her husband, and two of her brothers were playing cards in the parlor. The official story is that in her attempt to take some medicine to relieve her headache, she inadvertently drank acid. She was dead by the time her brothers and her husband were able to get her to the hospital.

Her daughter Patricia, who was 9 at the time, recounts a very different scenario, however. She remembers her mother and uncles arguing about who was to blame for the recent death of their mother. Katherine blamed her brother and claimed he had “lost the faith.” In the midst of this argument, Katherine deliberately went upstairs and found the acid and drank it intentionally as she was standing above the family on the staircase, causing her almost immediate and horrific death.

Tragedy continued to haunt the family. Ten years later in 1942, Edward, who was a colonel in the Army, was killed at age 35 in an Army plane crash when the plane struck a radio guy wire and crashed near Dallas, Texas. He and five other fliers perished in the accident. He left behind his wife Geraldine and their two children: Edward Jr., age 9, and Jane, age 4.

Records of Frank Jr., Thomas, and Patricia’s respective deaths are unavailable, but Frank Jr’s son, Frank III died as a child. It seems no matter where the family was, sadness and accidents seemed to follow them. Edward sold the family home at 1900 Broadway just two years before his plane crash.

Another owner, Audria Hart, who acquired the Fee family home in 1943, also had an extremely unlucky visitor. While in the home, the woman somehow fell over backward from the top staircase landing and landed in the foyer, breaking her neck and dying instantly.

It’s no wonder that this grand home that is now 130 years old, left empty and boarded up for the last 20 years or more, is such a perfect setting for what could be paranormal activities. When new owners Drew and Mark took ownership of the house and began renovating the carriage house to live in before the massive renovation of the big house into a bed and breakfast, they began seeing faces in windows in pictures of the house, feeling the presence of a man in various areas of the house, and a woman on the stairs. There have also been several EVPs (electronic voice phenomenon) recorded saying “welcome” among other phrases. The investigation into this home’s potential ghost activity is just beginning.

The exciting part about this new adventure is that the new owners will be hosting events for the general public to come tour the house and investigate for donations to the renovation fund. Anyone who is interested in a private tour can contact  drew@thefeehouse.com for information. Follow The Fee House on facebook for all of the upcoming details on events, tours, and progress photos.

Enjoy the gallery below!  To see the before and after photos of the newly renovated Carriage House visit the Fee House website: https://thefeehouse.com/the-carriage-house and have a look.

It isn’t often we highlight possible paranormal activity, so any if you have any input or see potential clues in these photos, feel free to share. Ginger had to return to the house a second time because on the first explore, the photos were inexplicably blurry, with no explanation why, since she is used to photographing low light homes. It’s possible they wanted simply to be asked permission before allowing photography, which was granted on the second attempt.

Abandoned Arkansas will be following the renovation of The Fee House along the way, so stay tuned. Maybe we will solve some mysteries together.