Designed by Mann and Stern, Architects, the Riceland Hotel is Stuttgart’s largest commercial building and was originally an elegant and commanding example of George R. Mann’s later neo-classic work. The building, constructed during the declining years of a rice boom which transformed Stuttgart’s economy, housed hotels and banks during much of its life. Within the massive frame of the structure’s five stories, much of the intrinsic commerce of the rice industry and the railroad were enacted.

The unlimited affluence of the Grand Prairie and of Stuttgart appeared assured with development of successful rice culture in the early twentieth century. Although dates and accounts of persons involved very, by 1904, the first commercially successful rice crop had been harvested and, by 1906, rice was cultivated in the Stuttgart area. In October 1907, the Stuttgart Rice Mill Company completed the first rice mill in Arkansas and an economic boom began. The prosperity permitted the construction of a brick depot and school in Stuttgart, the town was wired for electricity, and sidewalks were built and streets paved. By 1918, two more rice mills were in operation. To prolong the boom by enlisting new settlers to cultivate still more rice, the Cotton Belt enthusiastically promoted its lands in the Grand Prairie and the Stuttgart Land and Development Company offered free excursion trains to potential farmers.

By 1918, the economy of Stuttgart and the Grand Prairie was inextricably tied to the state’s thirteen million dollar rice crop. The Southern Rice Growers Association boasted that Stuttgart was “the price making rice market of Arkansas … by virtue of her geographical and railroad position in the center of Grand Prairie.” At least one bank also attributed its assets to the runaway rice market. According to W. B. Wall, cashier of the Exchange Bank, his institution’s deposits in 1915 totaled only $118.00. By 1918, they exceeded $800,000 “the greater part…accumulated by the patrons of this bank from three years’ profit in raising rice.”

In late 1919, a number of Stuttgart businessmen formed the Stuttgart Hotel Company. The company, which eventually included forty stockholders, represented all four Stuttgart banks and “every business and enterprise of any nature on Grand Prairie.” A Little Rock architectural firm, Mann and Stern, designed the building, and the E. A. Steininger Construction Company of Missouri was retained as the builder. George R. Mann also drew the plans for the Arkansas State Capitol, the Arkansas Gazette building, and the Marion Hotel in Little Rock. The Hotel Price, which stood on Third and Main Streets, was demolished to prepare for the new structure, enthusiastically heralded as “one of the most modern hotels in Arkansas.” 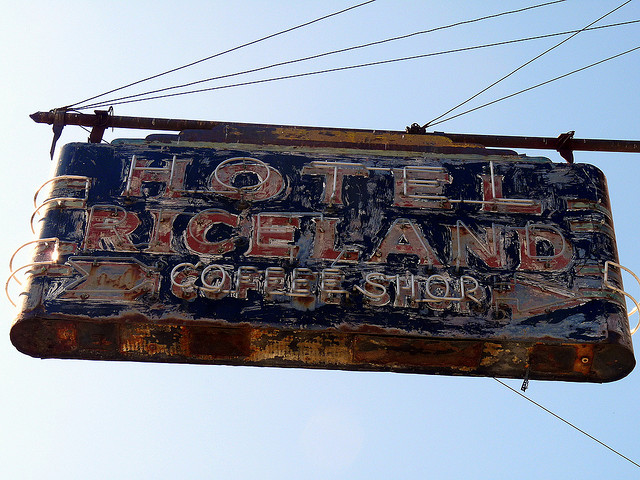 Construction on the building began almost immediately, as the rice economy of the Grand Prairie collapsed. In 1919, the price per bushel of rice reached a high of $3.50, but, in 1920, it plummeted to twenty-five cents per bushel. The effect on the soaring economy was instantaneous and devastating, “like a bolt out the sky.” According to the Stuttgart Grand Prairie News, the “entire locality was dealt a financial blow that put almost every individual in straits that will take several years … to overcome.” Late in 1920, stockholders ordered work on their hotel suspended and, for nearly two years as owners and creditors battled in the chancery courts, “the skeleton of the building stood as a tombstone to a dead burg.”

In July 1922, the Exchange Bank, the hotel’s new owner, resumed construction and hired W. F. Ault of Little Rock to complete the building according to Mann and Stern’s original plans and specifications. On February 15, 1923, the Riceland Hotel was formally opened. Leased by the Stuttgart Revilo Hotel Company, which operated several hotels across the state, the Riceland occupied the top three floors of the five story building, as well as the lower two floors of that portion of the structure which fronted on Third Street. The Riceland Barber Shop leased a section of the hotel’s basement, while Webb and Son leased part of the ground floor adjoining the lobby for their Riceland Pharmacy. On February 17, the Exchange Bank held its formal opening in the remaining two story portion of the building, which fronted on Main Street.

Following its nearly disastrous conception, the Riceland Hotel hosted a number of occupants. In 1926, the Exchange Bank, which had so solidly staked its success on rice, defaulted and was purchased by the First State Bank. Three years later, the Southern Hotel Company acquired the hotel lease, which it retained until 1957. In 1970, the Riceland Hotel closed. The part of the building previously occupied by the Exchange Bank and its owners houses retail and commercial tenants.

my papa used to work with the frount desk, if you havemformation plz let me know me and my Gf whant to evplore.

I used to work for Riceland Foods during the 90s, but I didn't see it mentioned in the story. Was the hotel named for the company? I worked in the Little Rock office, but remember the building when I would go to HQ and thought it was probably quite the place and a lot of business what probably conducted there back in the day.

I remember my grandfather working there as a cook…. shorty aka Daniel Floyd.

Would really like to have some of the old door knobs, bathtubs, and sinks out of there. The toilets were nice too, just wouldn't want to clean them up! If the owner see's this, shoot me an email about the bath fixtures at hawkeye197033@yahoo.com . Thank you, David Flynn

I can remember going there to get my photo made by the traveling Olan Mills photographer.
In May of 1964, when I was a senior in high school, I can remember that one of my (Linda Allen) classmate's grandmother took us all down there to dine.
50+ years ago, the Riceland was still considered as being on top.

what did it look like pls email me at emilyshafar@gmail.com

In the 1960's , I can remember my grandfather always there in the coffee shop having coffee and chatting with friends. Too bad it can't be saved. It was a jewel of the town.

Truly a great piece of Stuttgart history. The building has been stripped of every thing people could think of for relic's and antiques. It has withstood alot of time and elements and I am surprised it has not collapsed or mother nature has not taken it out in some way.

Loved hearing stories my parents and aunts and uncles would tell about the Riceland. We had several family Christmas dinners there and it was a BIG DEAL to get to go with the aunts for afternoon coffee with their friends and take in all the sights.

Are they NOT going to try and restore it?

Mann & Stern designed many beautiful neo-classical buildings throughout ARkansas. So sad to lose these outstanding examples of history.

There was a neo-classical building circuit — Hot Springs bath houses started by 1910, then state capitol 1915-1918, Stuttgart's hotel 1918-1923, then Pine Bluff and El Dorado buildings. Land agents and derrick builders/drillers left our rice (irrigation) boom and went on to the newly rich oil people circa 1925. A variety of state capitols drew architectural competitions around 1915 and lots of limestone and marble were being mechanically quarried and transported for these projects across many states.

A shame great history of the past is not in the future ..

All it takes is money…

Did it not go to auction in the last few years, did no one buy it

I drive by this building several times a day and remember being in it for different events back in the 50's and 60's.

Some Of My Fondest Memories Were Of GoingTo The Riceland As A Little Girl. The Lobby Was Very Elegant And That Is Where I Would See Santa Claus Every Year.
I Had BEen Told That Many Movie Stars, Such As John Wayne, Stayed There While Attending The Rice Carnivals I Wish There Was SOme Miraculous Way It Could Be Saved.

This place was probably amazing back in the day!

So wished they could have saved it. Such beauty at one time.

There appears to be some nice pieces of wood here and there that should be made into something nice. Also saw some old door knobs that someone would love to have.