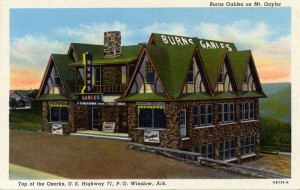 Burns Gables, originally built by the Burns family in 1937, was originally an extravagant stone building featuring a restaurant, cabins with a gorgeous view, and a great place for memories. Unfortunately, this beautiful building burnt in 1952. Soon after, the Burns built a smaller, two story stone building to replace the old structure. Business continued until about the early 2000’s when the new interstate led to significant loss of traffic and business.

Edward A. Bellis Sr., his wife Stella Bellis and their son Ed Jr. came to the mountain from Ft. Worth, Texas after they lost everything in the crash of 1929. Edward bought five acres from R.D. Gayler, who had homesteaded the mountaintop south of Winslow so many years earlier. The Bellis family lived in the back of a pickup truck and a tent while they built the rock buildings and opened businesses that would grace the mountain for more than 60 years. They named the establishment after the Gaylers, who had been there since the mid 1800s.

After they came to Arkansas, Edward Sr., who was by trade a bookkeeper, laid the rocks following the plans of his wife Stella until a two-story service station, a small house behind the gift shop, an ice house, and rocked-up spaces for a multitude of flowers were completed. Over the service station was an apartment in which their son Ed Jr. would live with his wife Sue Steward. Ed Jr. and Sue had four daughters and a son they named Edward III. One of their daughters, Ruby Jo Bellis, was the only descendant who wanted the Mt. Gayler.

After I-540 was finished, the heavy traffic moved west leaving the mountainous and often dangerous Highway 71 deserted. Ed Jr., spoke in favor of that highway, stating, “It’ll ruin our business, but we can’t stand in the way of progress.”

As of 2010, Burns Gables and the tower remains closed and in need of repair.

Also, that might be my sister’s or my teddy bear from the 80’s. Mom had stored some boxes there before JC died. Loved that place

This place is one of my favorite childhood memories. JC was one of my mom’s best friends for the most of a decade we knew him. If and when my online and investing stuff takes off, I’d love to buy it and fix it up.

My name is John William (BUDDY) BURNS..I am the only son of John Davis and LaVada Mae BURNS. My Grand Mother was Etta Davis Burns, we fondly referred to her as Granny! I am 86 yo and live in WA state where my son and daughter reside. e-mail. bburnswhs54@gmail.com

I never knew the Gaylors, but was friends with Eddie and Sue Bellis. They had a cafe on top of the mountain and had a small train that ran around a pond behind the restaurant. You could ride the train for a dime, and could climb the tower for a dime too. So many great memories of that place.

I am a descendent of the Gaylors who settled this area. My grandmother, Mary Francis Gaylor David, was born in Winslow in 1882. I remember visiting here when I was a child, in the 1950’s. We moved to the West Coast in 1956, but usually visited Mt. Gaylor when we visited the area on vacation. The last time I visited was three years ago, and I hated seeing how rundown it has become! I hope someone will restore it!

I grew up at the Burns Gable, my aunt Marylou, Jonny and Mark, I’ve ate breakfast with the original owners and my life is attached to this place, I also stayed in the cottage and the great White House, where my aunt lived with the boys, my memories are strong! Sad to see the pictures of ruin… one of my favorites in the gift shop was the rose stones… RIP

These photos should not have been taken. They were trespassing on private property. Just because it is no longer lived in does not mean that it is abandoned.

not abandoned? did you see the pictures??

As one of the only three living family members of this property, I would love to be able to share more details of it's history. And I assure you that it's demise was not born from a lack of care or concern, but family greed, selfishness, ignorance and legal battles long ago. Please be respectful of my family legacy and do not trespass in this space again.

I am interested in hearing your family's history. How can we make it possible?

What a shame this iconic Arkansas property has been abandoned. I have restored older buildings in Fort Smith and might be interested in this one as well. I do not see how to find out about acquiring it though.

I was fortunate to visit this place a few years ago. My last name is Gayler which drew my interest in visiting. It appears to have been a real destination at one time. I visited the Gayler Cemetery nearby. I also visited with the current owners caretaker and was told it would be refurbished at some point. Hopefully this will come to be.

My name is Mary, my children and I were friends to John for many years. I always wished he could find more joy in life, but we still say hello when we pass. Feels like he's probably still there. I hope the property finds an appreciative buyer.

Dear Burns family I believe we may be related via my father Allen Edmondson who was adopted. Are there any relatives of Mary Lue Burns alive to discuss this with? I may be her grandson
Thanks lindal Edmondson
Lindal@edmosound.com

Hello! My name is Rebecca Ralston. My maiden name is Pense. Ive been trying to find out any information I can on my grandmother. Her name is Mary. She came in on the orphan train as a child. From. What i am told she first was taken in by a family with the last name of Edmonson. She then went to live with the Reed family then live with the Pense family where she married my grandfather Harvey Pense. Any chance you know of her?

Can you email me please lindal@edmosound.com I’m trying to connect with family thank you

Who ever takes the photos does these places no justice. Abandoned or not , with or without memories of the places I'm disappointed on how you showed mostly trash and not the beauty of the places

Not Keown
Reply to  Keown

Mostly trash? What the hell are you talking about? So what would you do different? I've been following this group for years, and I know that their mission is to preserve these places before they are demolished. I hope that one day they can be restored. I think they're doing a good job.

Oh, my goodness – 65-70 year old memories. My father was a banker in Ft Smith and had an interest in Burns' Gables – before the fire. .About once a month we would drive there for dinner and a visit with the lady that ran the gift shop – I don't remember her name but I do remember getting SO bored as the grown-ups talked. I'd walk around and around the display in the middle of the gift shop. I also remember my mother always ordered fish because my father wouldn't allow fish in our home! I wish I had… Read more »

Thanks for sharing such a wondrerul memory! I would love to get more information from you about your father's interest in the property. I am the granddaughter of John David Burns. How can I contact you?

OMG-you're crashing my childhood memories. a couple of times a year after church on Sunday we drove up to Burn's Gables from Fort Smith for lunch (instead of going to Crane's Cafeteria downtown where I always ordered "macaroni and cheese and (cinnamon) apples". You passed Boston Mountain Lodge and Artist Point on the way. I always had to go across the street and pay the 10 or 15 cents to climb the tower. And there was a little pond with a couple of paddle boats that I never saw in use. Maybe a little train around the pond? Wonderful, tacky,… Read more »

Thank you for sharing such a wonderful memory.

I am very curious where all the photographs inside Burns Gables came from.

Stick up my ass
Reply to  Brandi

Me too. My guess is a camera.

This is an interesting photo essay of a building ON Mt Gayler. Other than a few shots of the Mt Gayler Tower from across the street this "Abandoned Arkansas" is not about Mt Gayler at all. Of the 204 photographs in this series, over 190 of them are NOT taken at the Mt Gayler Gift Shop and Tower and have little to nothing to do with the Bellis Family.. Also, quite a number of the photos are just the same pile of stuff taken from a different angle.

Apologies for the inaccuracy in the previous post.. We have added Burns Gables history to the article! Let us know if there is anything thing else missing. 🙂