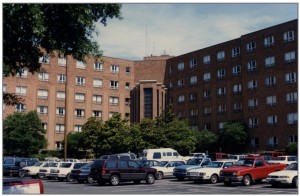 This hospital was abandoned after years of life as a top-tier health provider in the state of Arkansas. Now it has been abandoned.

After World War II, the hospital activity picked up in North Little Rock. Memorial Hospital also opened on the hill above Pike Plaza. Once a state of art facility, the Memorial Hospital is where a lot of people in Arkansas were born. It’s sad to see such a big part of Arkansas just sitting abandoned… The new hospital was moved in late 2004 and renamed Eugene Towbin Veterans Affairs Hospital (AKA Va Hospital North Little Rock).Just down the street from the old location.

After it was closed, the original hospital building was occasionally used as a “Haunted Hospital” attraction around Halloween, which would account for some of the images where there appears to be smeared “blood” on the walls. This hospital is not actually haunted. 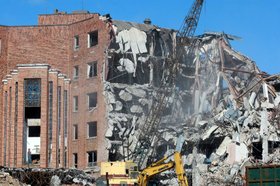 Thank you to the demolition crew for letting us in to take pictures.

Unfortunately, the time that I went, the building was half way torn down. By now it is completely gone. I stood in front of the former Baptist Memorial Hospital in North Little Rock to watch a crane operator drop a wrecking ball into the building that they are demolishing. The 6-story structure was built in 1962 and closed in 1999 when the hospital moved. The city acquired it and then sold it and the surrounding 40 acres for $200,000 to One Pershing Circle LLC, a Little Rock development group.

I had wondered what happened to this old hospital. Thank you for the pictures. It was a beautiful old building – sad that it was left abandoned and is now gone. My grandparents lived nearby and we used to eat at the cafeteria. The food was truly excellent.

Do you know what year this hospital was demolished?

I helped tear out the copper, brass and other recyclebles along side the guy that bought it. he was in his 70’s at the time hard worker! and he made over a million dollers just off the scrap

I worked as a nursing assistant in the ER in 1990 until I graduated from BMC Nursing School in 1991. I then worked as a RN in the ER until I left to go to UAMS. I have so many fond memories and life changing events at BMMC. I wish I’d never left but sadly, hindsight is 2020.
I will ALWAYS cherish my life changing moments at BMMC.
#endearingmemories

Thank you for the lives you touched. Born here Oct 1970.

I was actually born here in 1996 and I later went to the haunted attraction twice when I was a teen. How crazy that it was demolished.

I worked in the E.R. from 1985 to 1990 went to work as a new graduate RN straight from Baptist School of Nursing. At that time the night shift was me, another RN, a clerical person to check patients in and answer the switchboard, and a doctor. Like the other guy above commented, some nights we were empty and the doc slept all night, some nights we didn't stop. We got several trauma cases being the only hospital on that side of the river, it was a good place to work. The nursing department was well ran and we as… Read more »

I wish they would do something with that place now that they have torn the old hospital down ,would be a great investment for someone

My mother worker there in the seventies and eighties and I would walk there after school. It was where my youngest sister was born and so many of us got stitches. I was shocked to see it gone.

I watched the hospital being built from my school room on 18th street. The hospital was originally 4 stories and 2 more were added. Then the new ER/ICU and CCU wings were added. All that remains is the ER wing and it has been gutted. I worked here in there mid 1970's to 1981. Worked ER on the 11-7 shift. Some nights we had no one come in, other nights we were flooded with patients. The ER staff was me, a nurse and ER doc. and that was it! When it was closed, I was hoping it would be developed… Read more »

I started working there in 1970 and spent most of my career there. I didn't even know it was being torn down. I can't help but feel sad. So many memories and so many friends made at that hospital.

I was born there in Oct 1970. Thank you for the work you did an the lives you touched.

The city of North Little Rock built the hospital, therefore the city owned the building. Baptist Medical System rented the building and ran it the entire time Memorial was in operation at this site. At one time during the 90's Baptist did a survey among the community and realized that people did not know that the hospital was ran by Baptist. Therefore the name was changed to Baptist Memorial Hospital.I even had someone tell me that "The hospital is better now that Baptist is running it." I went to Gardner Methodist Church off of Pike Avenue down the hill from… Read more »

I worked there many years started my career there we were more like family than co workers I have so many fond memories of that place it is so sad to see this I was hoping it would be used for something good .

Visited NLR throughout my childhood. It was a common practice for Grandparents and I to have Sunday lunch in dining room at Memorial Hospital. Food was excellent! Know it'sounds odd and is an odd thing to remember, especially after 50+ years.I also recall the beautiful stained glass windows. What is on the site now?

Why do graffiti artists always put creepy art on the walls in abandoned places ?

The stained glass was beautiful! Does anyone know if it was saved?

Unfortunately, the stained glass was not saved… When the hospital was demolished, everything went to the junkyard. Wish it could have been saved.

I was born at Memorial. So was my sister. My grandfather died in the ER there.

Great site! One quibble with the article, though:

Baptist Memorial Hospital was actually moved to another location – it is now Baptist Health Medical Center on Springhill Drive in North Little Rock. The VA hospital nearby this building is not related.

After it was closed, the original hospital building was occasionally used as a "Haunted Hospital" attraction around Halloween, which would account for some of the images where there appears to be smeared "blood" on the walls.

I wonder what happened to the large stained glass window that was on the front of the building….

Chris, thanks for the information. I didn\’t know a lot about this location. I\’m glad to know more! I will make changes! Thank you! Oh and when I went, it was already half way torn down. I never got to see the stained glass.