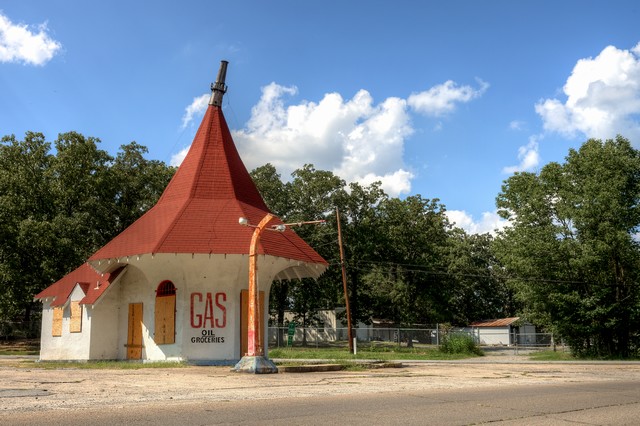 The Roundtop Filling Station was built in 1936 by the Justin Matthews Company for the Pierce Oil Company. Pierce Oil was one of the “baby Standards” formed after the U.S. Government’s breakup of John D. Rockefeller’s Standard Oil Company in 1911. Pierce operated gasoline stations in Arkansas, southern Missouri, western Louisiana, Oklahoma, Texas, and Mexico. In 1936, Pierce Oil contracted the Justin Matthews Company to build a uniquely shaped gasoline station along U.S. Highway 67. It is believed the structure was designed by Matthews’ company architect, Frank Carmean, and was built by builder C.C. Eubanks.

Wallace David “Happy” Williford, a senior at Jacksonville High School in Jacksonville, Arkansas, and employee at another Pierce-owned station in Jacksonville, was asked by the company to come run the new service station. Williford agreed and worked at the station before and after attending school. Williford paid men to work the station for him during school hours, but says it was hard finding men who would only work for $3.50 a week. For rent, Pierce charged Williford two cents per gallon of gas sold. At first, the station had no electric gas pumps, and Williford and his employees had to hand pump the gas up into the glass bowl before filling each car’s tank.

Around 1940, the Roundtop became a Sinclair station, after Pierce Oil was purchased by the Sinclair Oil Company. Around this time, electric pumps were installed Some time in the early 1950s, Sinclair sold many of their Arkansas stations, including the Roundtop, to the Phillips Petroleum Company, and the station became a Phillips 66 branded station. In the 1970s, the station would become a DX branded station, and when it closed in 1981, it was a Sunoco branded station due to Sun Oil Company’s acquisition of DX.

Roundtop Filling Stations Facebook https://www.facebook.com/RoundtopFillingStation (Find out how you can help Save this wonderful piece of History!)

In May, 2013, the Roundtop was named to the Historic Preservation Alliance of Arkansas’s Most Endangered Historic Places List, bringing even more attention to the property. In June, 2013, the City of Sherwood received a $50,000 historic preservation grant from the AHPP for the rehabilitation of the Roundtop. The match money for the grant was provided by private donations and funds from the City of Sherwood and the Sherwood Chamber of Commerce. Philip Quandt of Taggart Architects in North Little Rock prepared plans for the building’s rehabilitation, and PDC Construction of Little Rock was hired as the general contractor.

Phase I of the project began in April, 2014, which consisted of securing and stabilizing the building, replacement of almost every stud in the building due to extensive termite damage, the concrete floors, and the roof. Sherwood was awarded a second grant from the AHPP ($78,000) in July, 2014 to complete the rehabilitation of the building.

Sadly, on November 2, 2014, a fire damaged the building’s exterior. The Sherwood Police Department reported it an arson attempt. No arrests were made.

Phase II of the project was completed on January 3, 2015, and the old filling station is now used by the Sherwood Police Department as its Southside Substation.

Happy Williford was very excited to hear about rehabilitation efforts at the Roundtop. He routinely told his neighbors in Savannah that his filling station was becoming a “national park.” Williford died on March 8, 2014, at the age of 95. On March 13, 2014, a memorial service was held at Griffin Leggett-Rest Hills Funeral Home and Memorial Park in Sherwood, where friends and family gathered to remember Happy Williford. At the request of Williford’s family, Darrell Brown officiated the service. Afterwards, Williford’s family and friends were given the opportunity to tour the Roundtop where they reminisced about Happy and his beloved gas station.

Search engine marketing is simply increasing the web presence of a web page, website or brand name within the the search engines (Bing, Yahoo,etc).

you are talking approximately! Bookmarked.

Please also consult with my website =). We will have a hyperlink trade

Wow. I am definitely going share this with a few of my friends. Very cool information.

Whoa! This is impressive. I leaned back in my chair a bit and was just sitting here pondering everything you said. Really cool.

Make it fun ,easy DIY with the best tools and Accessories

I heard they are going to restore it. I hope so. It is on the endangered list.

I loved this place! I love the man who owns it, and I love his family. When I see this place; either by driving by it, or seeing these photos; I can always think of a happy/Happy memory.

I have memories of this place.It was on the way to Missouri Pacific railway, were my dad worked.Sometimes I thought faeries live there, sometimes I imagine it was a Dutch home, and always looked for wooden shoes by the door. I also like that it was kinda a round a circle.