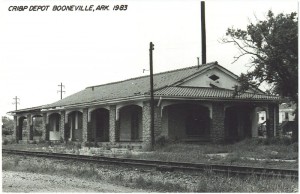 The Rock Island Depot in Booneville was originally known as the Grier Eating House. The hotels and eating houses conducted by Rock Island Railway were turned over to in 1907 to John J. Grier who operated them successfully for 20 years under the John J. Grier Hotel Company. This particular Grier House was completed in Sept. 1910 for around $50,000 and furnished using timber specially secured from the Booneville District. In 1922, an addition to the eating house was used as a temporary dining hall that was later turned into a lunchroom while the other was being refinished. The dining hall seated fifty people while the lunchroom sat thirty-four.

The last customer of the Grier Eating House dining hall was served in 1925 due to dining car service improving, allowing patrons to be served on the train. The lunch counter continued to serve the nearby workers of the railroad, it was a short decade later when the Great Depression sent Rock Island into bankruptcy that the lunch counter of the Grier Eating House served its last customer in 1936.

In 1945, Rock Island Railway renovated the Grier Eating House into a new depot fitted with an office, and telegraph station. This allowed for the old depot to be demolished and all railroad operations to take place at the former eating house. It was used as Booneville’s passenger depot until 1967 when the passenger trains were discontinued. After 1967 the depot still served as the office for freight trains. The death of the Rock Island Railway Company came in 1980 after a tumultuous run, tracks in Booneville were taken up later that year and the depot was abandoned.

Mr. Danny Aldridge’s father, James Henry Aldridge, was a conductor on the Rock Island until the late 1950s. He worked on both the “doodlebug” passenger trains and the regular freight trains. This meant a lot of train riding for Danny and his family since they got free passes. Their family outings typically consisted of loading a baby carriage on the train, getting off in Little Rock, and spending the day shopping or visiting his grandparents and then coming back home. “There is something romantic and exciting about a railroad. I remember as a child watching the doodlebugs from my grandparents’ house east of Magazine on Highway 10 and wondering what it must be like actually to ride on one. I never did find out. I also remember vividly the closing of the Rock Island line through Booneville in 1980. I had just started working in the Order Entry department at Wolverine Toy. Glenn Shipley was the Supervisor of our department, and Larry Lowder was the Shipping Supervisor. The way in which they had to approach their jobs changed significantly when the railroad shut down and everything had to be shipped on trucks. It was the end of an era, and a sad chapter in the history of South Logan County” said a fellow Arkansan.

Unfortunately, a few decades after it closed the abandoned depot suffered a fatal fire that ravaged most of the building. Leaving only some rock columns and one end of the depot to stand as a memory for what used to be.

The Booneville depot had a unique style because it was built as a railroad eating house about 1910. John J. Grier Hotel Company was the Rock Island Railroad's version of the famous Fred Harvey hotels and restaurants that were found along the Santa Fe Railroad.

I have friends that have been here and said that it has really weird energy.

Where is the depot?