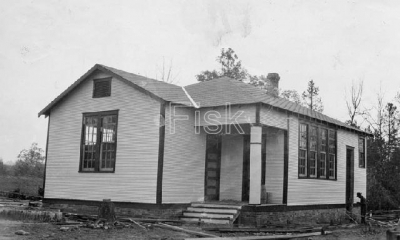 In 1917, Julius Rosenwald, philanthropist and President of Sears Roebuck and Co. created a foundation to support education of African American youth. Rosenwald’s fund aided construction of over 5,000 school buildings across the South and over 300 schools in Arkansas. The Bigelow Rosenwald School was built in 1926, at the height of the Rosenwald Foundation’s activity in Arkansas. It was the only Rosenwald School constructed in Perry County and is one of less than twenty that survive statewide. The building was used as a school until 1964 and then as a community center for many years.

The building is threatened from lack of maintenance and lack of funds to preserve the building. Although it is easily recognizable as a Rosenwald School, the building’s large banks of windows have been replaced by much smaller windows.

Recently a board of directors was established to help restore the building. The group has consulted the Arkansas Historic Preservation Program (AHPP), seeking guidance on actions that are needed to preserve the building. Once the board establishes 501(c)(3) status, they will be eligible for grant funding. The Alliance hopes this listing will bring statewide attention and momentum to the efforts of the Rosenwald Community Cultural Center to preserve the Bigelow Rosenwald School!

Is the school still accesible? leo and sagittarius compatibility – 365 days of positivity – anjo 333

This would probably bring more of the interest among the professionals to seek every possible guide and probability towards which they must have to look for. Check Electronic widgets best electronic widget

There is possibly still a lot needed to be done to prove those changes and favorably by the time these would reflect towards better provisions of interest and values.

Improving better educational points and with school homeworks helps for students grow up. Thanks to this abandonedar blog for giving us with homework help about school knowledge and students homework methods always,keep it up,thanks.

Essay writing is an academic activity that aims to hone students’ writing skills. With its complex process, writing essays enables the writer to explore a topic in depth.

Greetings, I should say it was quite a awesome journey for me when I called in at your fascinating website. I hope you don't mind if I congratulate you for the level of quality of the work and to wish you all the best with it as you grow as time goes on. It was nice to browse your website and I shall certainly be calling back again before long to see how you are doing. Many thanks and I shall unquestionably see you back here again soon – birmingham handyman

It could proved to be a greatest element for the future success and also there would be more of the highlights which are considered to be so important, so it will be a good influence thinking over those objects. academic editing services

Writing piece of writing desires thorough and in-depth data of the topic undertaken for the study. It got to be in-line with the topic of your analysis. reproductive endocrinology fellowship

If not volunteer work, you got your GPA, you studied your GMAT and passed, and now it's time to send out those applications. With those applications, though, comes the idea of showing off your skills through the MBA statement of purpose essay portion of your application. biomedical science personal statement

Very nice and helpful information has been given in this article.

I positively like Bigelow Rosenwald School. Colors and a surface of the establishment are so sensitive and warm. It reminds me summer.

What has happened with these efforts? I see the building is no for sale.

Gail Woodard, I attended a Juneteenth 2015 event, an effort to give the Community an opportunity to come out and support rehah oh this historic building. Worked really hard, but enjoyed working with family and friends. So if you have an opportunity go on the Bigelow Rosenwald Community Cultural Center FB page and view the pictures, send us a donation, we need all the help we can get to make this a reality rather than a Dream.

The Rosenwald schools were rich in both scope and history. The first school that I taught at was in South Florida in a town called South Bay that sat on the edge of Lake Ckeechobee…and it was called The Rosenwald Elementary School. Fascinating man, Rosenwald – he left behind a very far-reaching legacy.

wpDiscuz
20
0
Have history here? Would love hear your stories or your thoughts.x
()
x
| Reply