Architect Charles L. Thompson, the last surviving Architect that founded Cromwell Architects and Engineers, designed the Arkansas Democrat building in 1916 as a Neoclassical Revival Style. This gave the elegant and dramatic look to the front facade of the building for the Arkansas Democrat Newspaper that resided inside. The Arkansas Democrat was an active competitor to the local Arkansas Gazette during the majority of its life. From 1917 to 1930, the hustle and bustle of editors, reporters, print-setters, and photographers winding actively throughout the loud printing presses of the Arkansas Democrat, was a daily happening.

President and General Manager of the Arkansas Democrat, K. August Engel, who held that position for almost half a century had acquired the YMCA building and established the Arkansas Democrat newspaper in the new building. After the Democrat newspaper vacated the building, it housed the Burton Furniture Store for a number of years and Lido Cafeteria after. After those establishments moved out only the ground floor became occupied again, the top floor being vacant for over 25 years.

RAO Video along with a subway franchise were leased in the bottom floors of the building in the last remaining years of occupancy. 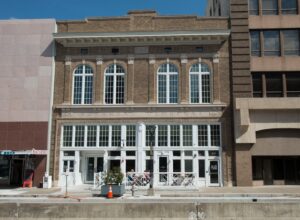 In 2015-2016 the Newark Moses Tucker Partners took on the upper floor of the Arkansas-Democrat building to create eight unique lofts while Cromwell Architects and Engineers redid the bottom floors. Debuting in early 2017 the beautifully constructed Arkansas Democrat Lofts include many charming features including the old plaster walls and a wonderful view of Main Street Little Rock.

Heading downstairs to the ground floor you’ll find Three Fold Noodles and Dumplings an increasingly popular restaurant in the Downtown Little Rock area. Three Fold prides themselves on making all of their dishes from scratch; dumplings, noodles, chips, and steamed buns. Handwashing and freshly chopped herbs are added to serve an overall extremely fresh dining experience.

Thank you to Cromwell Architects and Engineers for granting us access before the renovation!

My grandfather passed away in 1963 but he was advertising manager at the Democrat. He met my grandmother when she worked at Haverty’s on Main Street. They got married on New Year’s Eve.

My mom and dad met when they both worked at the Democrat about 80 years ago. I am a by product of that meeting

What happen?
How do I get more information about this?

Google it. That is what I just did.

I adjust going with you. This advise is really moving. I associated your dispatch other than add up to you dole along us is current also exceptionally instructive, I nonappearance to bookmark the worker so I can bounce back here from you that you hold achieved a stunning profession …

This article was very impressive .Thanks for sharing this.

This post is really awesome. I like it so much. Detail and easy to read. Thank you so much for this gorgeous article. Keep sharing helpful post. Cheers

Okay, what the heck is up with the sandwich, Michael?

You made a few decent points there. I seemed at the net on your hassle and positioned the majority may go collectively with collectively collectively along with your internet net page.

Great photos.Youre so cool! I dont think Ive examine whatever including this prior to. So pleasant to get any individual by using unique thoughts in this subject. Realy thanks for beginning this up. This notable site is one component this is required on the internet, someone with some originality. Beneficial job for bringing a new mission closer to internet!

Don't feel that tutors can easily be fooled. Your tutor might have seen this work on the google. Every student should compose essays at a while, whether you're in college, higher school, middle school, or maybe grad school.

Hello! This is a very nice article about it! it's very interesting, but before please check google very awesome blog!

do you want the world best CBD boxes so visit our sites on…..

wpDiscuz
28
0
Have history here? Would love hear your stories or your thoughts.x
()
x
| Reply