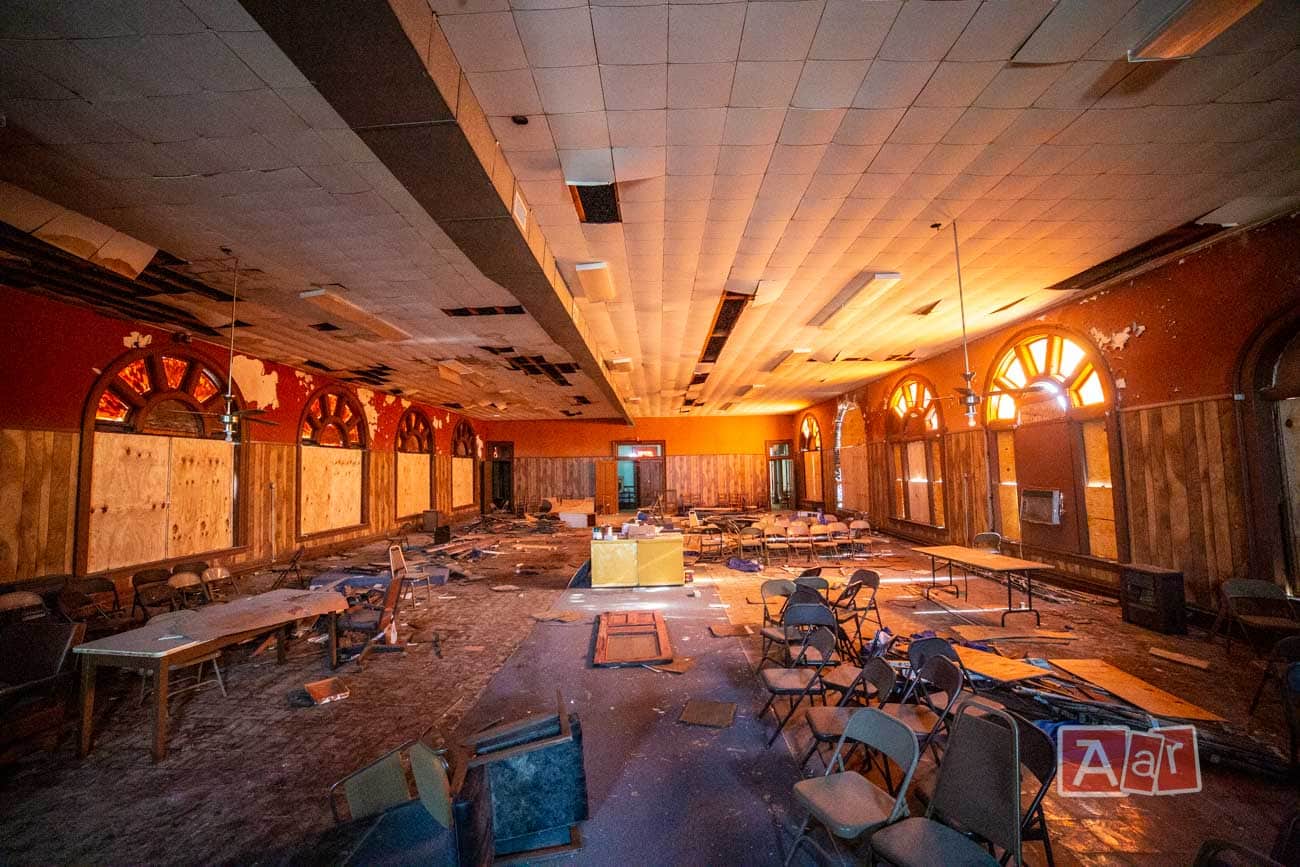 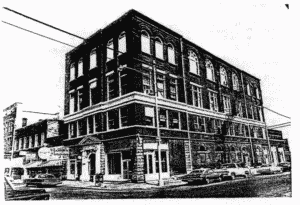 Under the leadership of Grand Master Clark, the idea of a Grand Masonic Temple was conceived and began in 1902.  The cornerstone was laid the same year, but the building was not completed until 1912.  The first meeting was held in the building in 1909.  The building was damaged by a fire in May of 1954.  Remodeling began in the fall of 1954 and was completed in 1955.  It served as the meeting place for the Masons and Order of the Eastern Star and other Masonic houses until 2005.

When it was completed, the Masonic lodge was the tallest building in Pine Bluff. The structure was built in stages by the Sovereign Grand Lodge of Free and Accepted Masons of the State of Arkansas, the state’s black Masonic order.  The first black masonic organization in Arkansas was the J.M. Alexander Lodge Number 4 established at Helena in June 1866, by the Grand Lodge of Missouri. On March 28, 1873, representatives from the three black Masonic Lodges met in Little Rock to form a Grand Lodge of Free and Accepted Masons in Arkansas. 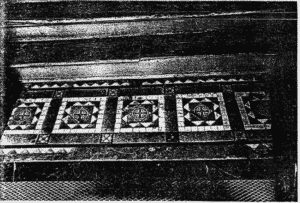 The organization of the grand lodge was perfected on March 31, 1873, and William Henry Gray, a free-born native of Washington, D.C. was elected the first grandmaster. Black masonry thus began a period of rapid growth and by the 1880s a movement began to construct a grand lodge building. I). group beaded by Wiley Jones initiated efforts to persuade the grand lodge to locate in Pine Bluff. Jones bought two lots on East Second Avenue and presented them to the lodge. Edwin Cook, a local architect, drew plans for a building. When the Grand Lodge met in Pine Bluff during August 1891, after a “stormy session”, the organization gave the approval to locate the temple in Pine Bluff. However, the proposed building was never started as the financing of the structure proved to be an insurmountable problem. Apparently, the approval of Pine Bluff as the location of the temple by the Grand Lodge in 1891 at least decided the question as to where the lodge would be built. By 1902 the Grand Lodge has accumulated enough money to buy a lot and start the building. On March 24, 1902, the Grand Lodge bought Lot 3, Block 40 of Old Town Pine Bluff for $7,000. Gibbs and Sanders, Little Rock architects, were employed to design the building and on July 7, 1902, W.S. Helton, a Pine Bluff builder, was given a contract to construct a four-story brick and stone structure. As part of the Grand Lodge meeting, the cornerstone of the building was laid on August 14, 1902, with elaborate ceremonies which involved local dignitaries as well as officials of the Grand Lodge and the Order of the Y Eastern Star. “Fully 900 Masons” marched up Main Street from Jones Park (located at Harding and Main Streets) to the site of the new building for the services. 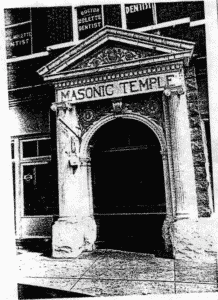 Funds available for construction were exhausted by the time the lot was bought and the foundation was laid. For over a year work was suspended on the structure. Through the efforts of J.N. Donohoo and J.C. Corbin, Grand Lodge Trustees, a loan of $25,000 was obtained from the Peoples Savings Bank of Pine Bluff to complete the building. Pat Powers of Little Rock was given a contract to finish the structure on the foundation built by Helton. Enough had been completed on the temple to permit the Grand Lodge to hold its annual meeting there beginning on August 8, 1904. Stairways were improvised and the sessions were held in the lodge hall on the third floor. In opening the first session, Grand Master Moses A. Clark said: “I now sound the gavel for the first time ever in a building of this kind, built and owned by African Americans. When the Grand Lodge met in August 1912, the last payment was made on the temple mortgage. At a special ceremony held at exactly the same date (August 14) that the cornerstone was laid 10 years previously, the payment was made and the temple dedicated.’ In the early morning hours of May 25, 1954, fire struck the building and burned out the third and fourth floors. The 10s were covered by insurance and the building was restored except for a dormer on the roof. As part of the remodeling, a self-service elevator was installed to make it easier to reach the upper floors of the temple. 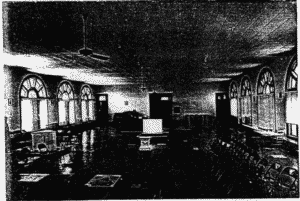 The work was completed in 1955 and a second cornerstone was installed on the northeast corner of the building above the original stone. The first floor of the building contains stores and shops. The second floor in addition to the Grand Lodge’s Offices has several offices which are rented to African American doctors and dentists. The state now has 184 lodges with 6,000 to 7,000 members and Grand Lodge continues to hold its annual communications in Pine Bluff each year.

Not Abandoned – Current Masons seek to Restore and Educate

While the upper floors of this historic building are currently unused, the bottom floor is still holding services and various gatherings. Grand Master Cleveland Wilson explained that ever since the upper floors closed, there have been several issues that cost them thousands of dollars each year. “People are constantly breaking in, leaving trash bags, stealing furniture, throwing rocks at the windows, and destroying this building. We boarded up the windows to protect them from further damage because it costs $6000 each to have them replaced and we have 80 windows.” Wilson mentioned.

It is clear that this building has not been forgotten about and the Masons have been working for years to turn the building into a museum and cultural center. We hate to see places like this destroyed by vandalism and we are excited to see there is a huge effort to help protect it and want to re-use it. Our history is disappearing every day and for Cleveland Wilson, seeing this building come down as is not an option, they are just looking for funds. “I shiver at even the thought of demolition,” he said. “Pine Bluff and Jefferson county played a huge role in our society and a Museum dedicated to showing tourists that history is important to all of us.”

Names of well-known lawyers and doctors to the area can still be seen on the doors inside. To mention, Dr. C.E. Hyman, a loved and well-known Obstetrician and Gynecologist delivered over 7000 babies in his office on the second floor. In the mid-1950s to the ’80s this area was the main area for African Americans in Jefferson County and Pine Bluff. “Doctors, lawyers couldn’t office anywhere else. We gave them the space so they could practice in this area.” This building goes way beyond Masonic history. Several inquiries have been made over the years as to how much the building would be, however, 95% of current Masons in the state are passionate about restoring it themselves to make sure it’s history can be saved for everyone to enjoy. Education regarding our nation’s history is just as important as our local history, because everyone has a story and they all play a major role in who we are today.

Want to help protect and restore?

If you are interested in helping to save this building by emailing Grand Master Cleveland Wilson at prihglo@cablelynx.com:

Special thanks to Cromwell Architects and Engineers and the owners for giving us special access. THIS LOCATION IS NOT OPEN TO THE PUBLIC.

Yeah a place in where you were indoctrinated believing you were serving GOD , and then you find out that it was all a scam to serve SATAN . I hope it meets with a RECKING BALL soon .

I believe my uncle was a member of this lodge. He visited my lodge with me several times but I never got to go with him. Sad to see it looking like this. Im sure it was a beautiful place in its day