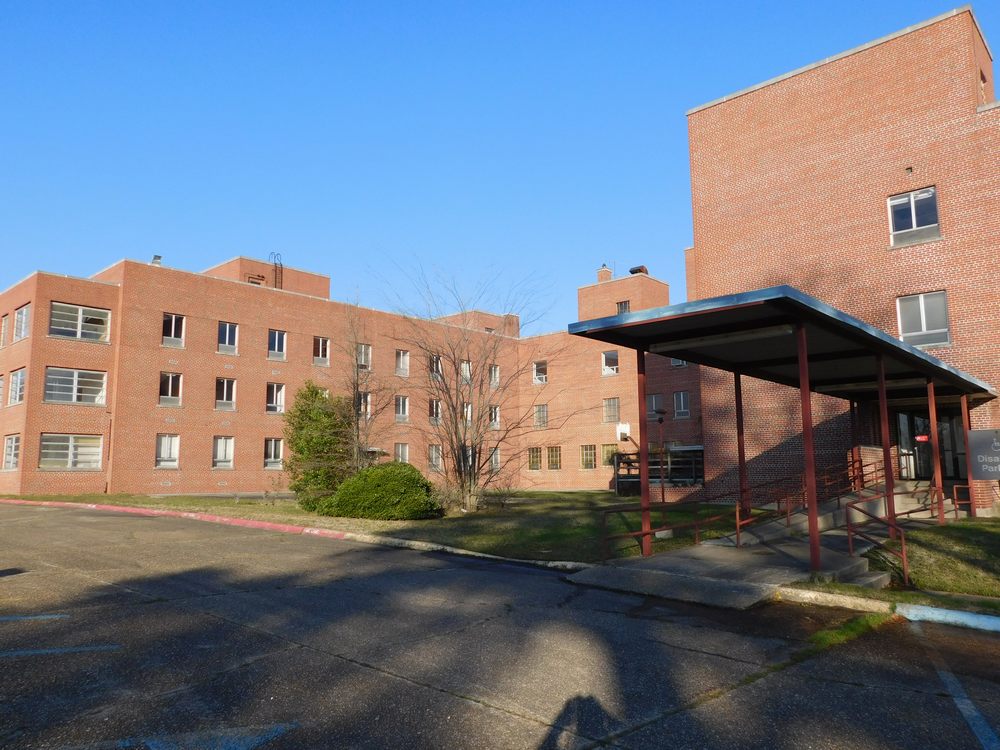 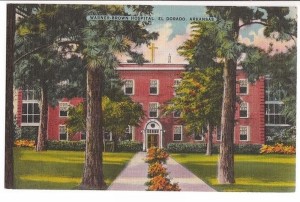 In 1919 construction began on the initial portion of El Dorado’s hospital. It was financed by Paul Brown and local businessmen. The hospital cost approximately $300,000 and was named in memory of Paul Brown’s Father. On January 10, 1921 the doors of the Warner Brown Hospital were opened and in full operation with 68 patient beds and employing 10 people. On Nov 30, 1927 the administration of the Warner Brown Hospital was shifted to the Catholic Sisters of Mercy in Little Rock.

El Dorado’s population grew rapidly due to industry in the oil boom in the 1920’s. At El Dorado’s peak the population was over 20,000. In the 1940’s the Sisters of Mercy realized an expansion program was needed. This expansion was to be funded by community donations, government grants, and the Sisters themselves. On June 13, 1954 the new annex was completed with a 130 bed capacity and hospital staff of 256.

On March 21, 1971 the Sisters of Mercy donated the hospital to the community of El Dorado and Union County. The community involved an advisory board who administrated the hospital as an Arkansas nonprofit corporation. The Arkansas Department of Health deemed the current property to be insufficient in space. In 1972 the advisory board contracted with The Baldwin Company to add the additional six floor annex by loans and donations. The cost was approximately $7,000,000.00 to complete.

In the more recent years the Warner Brown Hospital has been in the ownership of the Medical Center of South Arkansas. The ownership has been deeded to private development and will be extensively renovated for the use as a Veterans health hospital.

WARNING!: Special permission was obtained to take photographs. The Warner Brown Hospital complex is monitored 24/7 and patrolled by the El Dorado Police Department.

As of January 2021, this hospital has been reopened.

My brother was born there in 1954. I was born there in 1956. My son was born there in 1981. I worked there from early 1980 to 2015. A few years other places. I worked in the pharmacy, respiratory, pediatrics,nursery, L and D, and all the other floors. I absolutely loved WBH, and was devastated when it closed. I’ll never forget my years and all of the people that I was privileged to meet. It was truly a family that worked at WBH. I would love to be allowed to wander thru the hospital and reminisce. ❤

It has been reopened since January 2021. Google search it, there was an article.

How much is it?

Thanks for sharing this post. I am very interested in hospital. I would like to share my opinion on hospital.bundaberg vet clinicsWhat companies does the vet present? Some vets have extra superior gear than others, for instance, and are in a position to do extra diagnostic testing or can present extra superior therapies. Nevertheless, not all pets require these companies.

My name is Sue Dopson New. Thank you for posting this data about Warner Brown. My mother had surgery therewhen I was in 3rd grade. But my youngest son's life was saved1959. Ny husband was pastor of Three Creeks Baptist church in a village on the highway between El Dorao and Haynesville LA. Our address was Junction City, AR. My son got his head cut with a dirty shovel playing at Bastrop the week before My husband was hundreds of miles away. Dan was 3 years old and that day he cried pulling at his ear. His eye looked like… Read more »

My family is from El Dorado and areas around there. My great grandpa & great grandma ,Tom & Genie Wilson, lived and worked at the saw mill in Three Creeks/Shilo. They are buried at Shilo cemetery, along with 3 of their children(probably more). Back in the ‘80’s my parents, Dallas & Sharon Beck Campbell, got caught up in genealogy. I remember going to the cemeteries behind little one room churches in this area. I grew up I. Tulsa, OK. Most people have never heard of these villages and I was excited to hear your story mentioning them. Thank you for… Read more »

Is there a secret passage underground that the sisters, nuns used to go back and forth.

I was born there in 1959. Would love to tour it. What happened to the beautiful Angel statue??

Why are there so many abandoned hospitals in Arkansas ? We only have one in Oklahoma and it's a mental asylum and former tuburculoisis sanitiorium .

Dr. John W. Harper delivered me back in 1954. His clinic was right across the street where his son pratices now. This large building could be used for many many things, why let it just fall down? Doesn't make since.

I was a Candy Striper there in the 60s. My mother and my sister-in-law worked there for many years.

That hospital will forever be in my memory. My birth certificate is from there. My aunt who was like another mother to me went to me went to nursing school and graduated before the Sisters of Mercy discovered she had secretly gotten married. On those a woman couldn't go to nursing school there she was married. Later I taught school in a portion of the building when SAU El Dorado initially opened.

Proud to have worked there in the 90's ! Great memories !