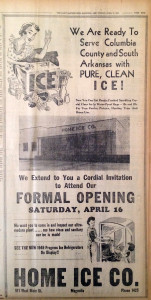 Magnolia’s coming summer heat took a major setback this week with the announcement that the home ice company is ready for full operation and will have its formal opening Saturday.
L.H. Schultz, manager and part owner of the local company, said that final tests on the new ice manufacturing equipment were completed last week, and that the firm is no marketing ice retail and wholesale.
The home ice plant completes a block of new business establishments on the area between West Main and West Calhoun. It faces Main Street, north of Magnolia builders supply.
The brick, tile and concrete structure was completed several months ago by Bennett and McGowen, local contractors. During the winter modern ice manufacturing equipment was installed by Walter Collins of Texarkana, construction engineer for ice plants. Overall dimensions of the building are 62 x 63′. A loading dock in the managers office and sales room occupy the front of the building, with freezing and storage compartments in the rear. 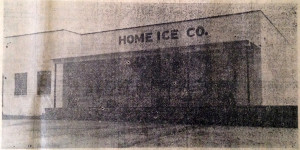 The plants brine tank can produce 30 tons of pure, top-quality ice each day, Mr. Schultz said.
Water is placed in cans in the tank, and saltwater brine, I kept at a temperature 15° to 25° below the normal freezing point of the pure water, circulates around the cans and freezes the water in them into commercial ice.
Ammonia coils at one end of the tank reduce the temperature of the brine, and circulating paddles cause the salt water make sure to pass through the coil’s and around the cans of freshwater. The freezing equipment is electrically operated and entirely automatic, the plant manager explained. Ammonia compresses are through medically controlled to maintain the desired brine temperature, and ensure even freezing. The storage compartment of the plant has a capacity of 70 tons of ice. 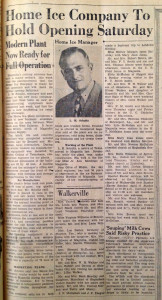 Mr. Schultz said to home ice company trucks would be used on the routes in Magnolia during the early weeks of business. Ice is being wholesaled to independent peddlers operating routes throughout the county. The company sells ice and both black and crust forms. Crushed ice is offered in waterproof bags. Also sold at the plant are ice refrigerators, cold drink boxes, drinking fountains and ice cream freezers.

Working at the plant

L.H. Schultz, a native of Texas moved to magnolia last November, while the plant was under construction. His wife is the former Miss Joanne Monzingo of Magnolia. Just Olive of Waldo, The day plant engineer, has had 20 years of experience and the ice business. Relma Burdine of Magnolia has charge of ice manufacturing at night.

Home Ice, an Ice factory in the middle of Magnolia Arkansas,  closed in 2000 and there are currently no plans for renovation or demolition.  Inside we found papers scattered everywhere, along with old photos, equipment that produced ice and old signs of the factory. There was a lingering smell of asbestos along with water damage and rust. Vandals have ransacked the old office scattering furniture, personal items and records.

THIS FACILITY IS LOCKED AND  WATCHED WITH SECURITY CAMERAS. DO NOT GO ON THIS PROPERTY UNLESS YOU HAVE PERMISSION!


0 0 vote
Article Rating
Liked it? Help AAR take action to save some of these places on Patreon! Donations will help fund clean ups, securing of buildings and hopeful restorations as we work with the owners who want to bring them back to life.

always wanted to see the inside, Thanks for sharing

Now that the county is wet they could turn it into a restaurant and dance hall, and keep the name. 😀

The explorer who will not come back or send back his ships to tell his tale is not an explorer, only an adventurer; and his sons are born in exile.

What wonderful memories of going there with my Daddy as a kid so sad would be awesome if some one could restore it to the ice house if for nothing other than history.

It looks very cool! I would love to explore anything like this

I have wanted that blue sign since we first moved there. So neat.

It would be awesome if someone would take this project and make something neat out of it!

Kinda of interesting the owner's name in one of the pictures

I drive past this every day and always thought it looked cool. So neat to see how the inside looks, kinda sad though. Now I am looking at all the other abandoned places on that website lol thanks for sharing

I would LOVE to put a steak house in there.

I was just thinking someone needs to renovate that.

Yea, it would be perfect for a steakhouse. Magnolia needs one.

That brings back memories

Used to by bags of ice there!

I remember going there to get blocks of ice.

I wonder who owns the building? There's some really cool items that could be refurbished into other things.

I remember this place as a little girl growing up in Magnolia. Wow.

I remember going there, too.

I remember that place…

I loved going there. Oh and getting ice for home made ice cream

U know Camden has an old abandon ice house I wonder what kind a shape its n wonder if they r bult the same.

wpDiscuz
30
0
Have history here? Would love hear your stories or your thoughts.x
()
x
| Reply