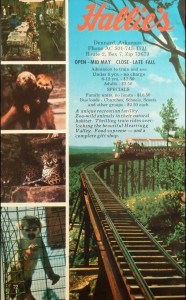 Hallie Charles Ormond first opened the rest stop & zoo in on labor day, 1973 with hopes to attract people from all over Arkansas and create a roadside stop for tourists traveling toward Dogpatch USA. According to an article in The Camden News on June 22nd, 1974:

“That’s why when he decided to build Hallie’s Rest Stop alongside U. S. 65 near Dennard, he didn’t plan just an ordinary, simple rest stop. No sir! Halite’s Rest Stop was to be an extravaganza—one tourists would remember for a long time to come. To say the least, Hallie’s is unique. Where else can you pull off the road to stretch your legs and, at the same time, ride a miniature railroad, tour a zoo, go on a pony ride, play games in an arcade, do a little shopping and dine on a gourmet ham sandwich? There aren’t many places.”

Hallie’s was the result of a long-time dream and was also the fulfillment of Ormond’s ambition to try something he hasn’t done. He was born and raised a few miles from Dennard in the tiny community of Klba which sprang up around the railroad in 1905. Always one for Amusement Parks, he was actually an early investor in the world-famous Dogpatch USA Theme-park that ran until 1993 near Harrison, AR.

At 68 Years old, Ormond wanted to not only when the zoo first opened, it featured a miniature train vessel that was that had the tallest miniature train tracks in the world. In total Ormond had 6000 acres of land between both counties and a vast majority of it was used for the zoo. The zoo featured an ice cream shop, gift shop, restaurant, and had animals that included lions, tigers, bears, spider monkeys, and many other animals. Hallie’s Rest Stop & Zoo continued to have a steady flow of business until the late 70s when Ormond sold the roadside attraction to a couple from Texas that were planning to develop a subdivision near-by. It then was known as just “Hallie’s Rest Stop” and the new owners made a few changes to the zoo that lead to a steady decline in guests.

The final strike was in 1979 when the lion’s cage was left open. The animal then escaped to nearby farms and was seen by many neighboring farmers. Two weeks after the escape, the tame lion returned to his cage to be fed again. Even though the lion did not harm any of the cattle or residence, there were complaints to the city sheriff’s office. Van Buren has a law that states that you cannot have any exotic animals in the county. This included zoos, however, Ormond had a lot of political connections and respect from both Searcy County and Van Buren County. When the zoo changed hands, the owner didn’t have the same connections which, along with the lion escape, led to the forcible shutdown of the zoo.  All of the animals within were shipped to zoos all across America. Hallie’s zoo then abandoned altogether.

The property sat rotting for many years until it was reopened as a restaurant. Only the main building of the zoo was used and the rest of the zoo remained in the state of decay. Shortly after that, in the late 2000s, the restaurant closed and left the zoo once again left forgotten. 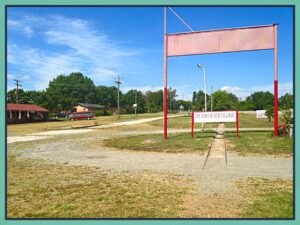 The zoo and restaurant closing does not mean the story is over, it’s simply the beginning of a new chapter. This new chapter starts with a need for a new church building; similar to the movie “We Bought a Zoo,” Rick Montgomery plays the part of Matt Damon in real life. After filtering out other possible locations, Montgomery one day passed by the old zoo and was immediately attached. From the very beginning when purchasing the old property, he was already planning new and creative ideas to use the zoo to help preach his message and make it fun for the congregation.

As of August 2014, Montgomery and his church have renovated the three main buildings for the zoo and plan on using the old part for different ways to preach his message. Montgomery has expressed that he is excited to be able to preserve what he considers an important landmark to Arkansas.

UPDATE: As of 2017, Montgomery has expanded his mission to a 2 phase program called Zoo Outfitters Operation (ZOO), a faith-based drug and alcohol rehabilitation program for men.

We are so excited to see Montgomery repurposing this Arkansan landmark. Had it not been for him, this zoo might have faced to wrecking ball or continued to sit, slowly disappearing.

To learn more about the free ZOO program, go to:

A mission centered group of believers who purchased an old zoo to use as a base of operations to reach the Least, the Last and the Lost of our generation. The vision for The Zoo Church Village is to be a regional light house that will reach out to the least, the last and the lost to bring them to the salvation knowledge of the Lord and to encourage believers in Him to live their lives to the fullest, based upon precepts of the Holy Word of the Lord and to be a place of rest and reflection to believers from all over the country traveling highway 65 through Arkansas

When do you open and are you hiring

I’ve been to this. MOM AND Dad took us on the way to Dog Patch. Mom bought this beautiful Peacock bedspread there in the shop.

Amazing. I have never heard of this place. Thank you for sharing.

During the summers, I worked there from 1975-1977. I drove the train, worked in the gift shop that sold tickets for the zoo and train ride, and I also worked in the restaurant when the cook (my mom) would have a day off.

What else do you remember about the park?

Awesome photos, wonder how can I get there …

I am in fact grateful to the owner of this website who has shared
this fantastic paragraph at at this place.

Used to stop in at Hallie’s often with my sons when they were young, and they loved the train ride and animals. They’re now 44 and 40. Seem to recall efforts in 1979, when Bill Clinton became governor, of the Ormands to sell the larger property off U.S. 65 to the state as a state park. Effort failed when state learned a stream on the land was seasonal, so not floatable 365 days a year. Sorry it fell into disrepair. Once was very pleasant for family outings! Lived in Little Rock 1945-95 and wrote for newspapers, but relocated now to… Read more »

I was just wondering if anyone had pictures of the zoo back in the day. Also does anyone know how far down the mountain the zoo went? I have been there and tour the cages but it says the zoo was almost 6000 acres and what is cleared now is only maybe 2 acres. Keep up the good work. Thanks

My mother was walking a wolf that was kept there a few weeks ago, and we went deep into the woods. The land may have been on thousands of acres, but there wasn't a lot of evidence that the zoo actually went down that far. We came across several beautiful waterfalls, but the land lacked any development. The pastor and his wife are clearing the area out for a project they are doing.

Wow, wow and wow! What a creepy and beautiful abandoned place! This one is totally unique. I seeing abandoned zoo for the first time! What i vibrant place. I'll definitely visit it someday. Thanks for the great post!

A education for all youngsters, which is the reason we have a state financed instructive framework to offer every tyke an informative open entryway, paying little regard to their experience, watchman's compensation or some consultant sample resume picture different components. Investigation has exhibited that beginning a tyke's education early and well is basic.

Our family went there, back in about 1972. I loved the train, but I remember the bears the best. My mom had just bought a bag of candy at the gift shop. My dad told her to give the black bears a piece of candy. One of them reached out and swatted the bag right out of her hand. Guess that’s why the sign said stay back.

I used to drive past that place every week on my truck route to Harrison and always wondered what that tunnel was for but now I know. Had no idea that used to be a zoo.

Love what you folks are doing. Most of the places I've not heard of, but enjoy the education, love Arkansas history. The ones I do remember I hate to see their current condition, but they bring back such great memories. Thank you all.

Wow – you all have once again found a lost Arkansas treasure. Congratulations – love reading everyone's comments too.

I worked in the office at Hallie's for awhile back in the mid-70s. Someone mentioned riding the train and thought there was some kind of big cat. There was, and his name was Tommy. He was a sweetie; I stroked him and scratched his ears everytime I passed his cage. I still have a large ceramic zebra I bought in the gift shop.

We went there on a field trip in headstart.