The large sign, hand-written with a bold sweeping letter on white poster board, authoritatively proclaims:

2.       Everyone will speak only when called on by the teacher or aide. 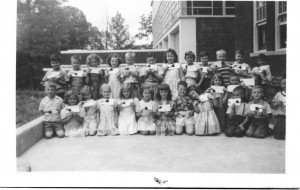 Not necessarily the rules that we all grew up with in school but then again, the old Summit School wasn’t necessarily always like most schools.  Originally built as Greenwood in 1939 as a regular elementary school within the Hot Springs community, the school began losing attendance in the 1980s, it was finally closed in 1993, and it then sat abandoned.  But not for very long, though.

It was reopened in 1994 at which time it became known as the Summit School – an educational facility for at-risk students that were unable to function well within the more traditional educational settings. These students, often suffering from behavioral-based problems, frequently found an environment better suited to their more problematic learning needs within the Summit School.  And the school was very successful in its second life, too.  The school was so successful in its special mission that, in 2009 a brand new, more modern facility was specifically constructed to house the growing facility.

And the old Greenwood Elementary School in Hot Springs sat empty, again. As is often the case with such buildings, it would cost too much to tear the school down and clear the land and nobody’s really clamoring for the property anyway, so the local school district is simply using the deserted building as storage.  But only on the bottom floors. 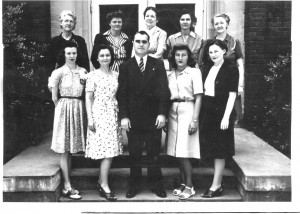 All of the rooms on the top floor remain very much as they were left on that last day of school back in 2001.  Student desks still sit in their special seating arrangements, all geared toward the most effective classroom management patterns.  Posters still adorn many of the walls.  Chalkboards and dry erase boards still contain their last messages rooted in those final days of learning.  Teacher’s desks still rest in the corners of their classrooms that provided the best views of all of the students on a simultaneous basis.  Piles of papers and manila folders full of even more papers remain stacked on those desks, perhaps representing that one last round of work that departing teachers opted to leave undone, resting securely in the knowledge that they would not be returning to it.   Framed pictures continue to provide educationally themed decorations.   Having been originally built in the 1930s, all of the classrooms have very tall and expansive windows geared toward allowing maximum illumination by the sunlight, but now the curtains over those majestic old windows remain closed to be opened no more.  And hundreds of antiquated wooden seats, all arranged in a multi-tiered bleachers-style format, all stare emptily out over a spacious wooden gymnasium floor, it’s shiny luster gradually losing its battle with the years that are no assaulting it.

Update 2020: Unfortunately, this building has now been demolished. There was an amazing effort to save it, however, it met the wrecking ball in November. 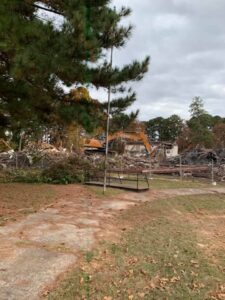 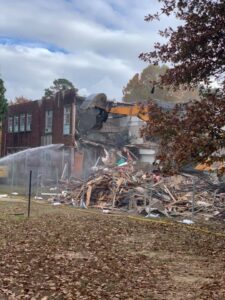 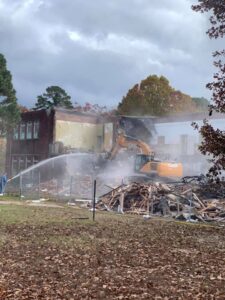 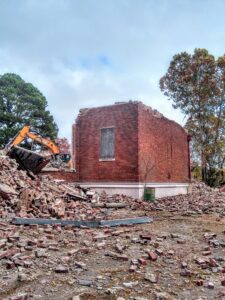 can i buy the land it was on

I remember running thru these hallways, but i didnt go to this school… Wat happened was: A Few friends & i were out late too late one summer night running the streets (while moms were working) we were on our way to the Lil woods behind the school. Well one of us noticed one of the windows was left propped open with an eraser, so we all went in with our flash lights… Didnt do any harm to it, we just ran the halls and went through the desk and stuff like nosey lil kids until we seen the bright… Read more »

A tribute to Ray M. Spencer (12 May 1906 Apr 1981) Hot Springs, Garland, Arkansas, Most all of us can remember a school teacher that stands out in our memory. When I was in the fifth grade I attended Greenwood Elementary School in Hot Springs. One of my teachers was Ray M. Spencer. He was a self-educated teacher with some college background. I remember he was tall and lean. He reminded me of the fictional character, Ichabod Crane in Washington Irving’s short story, “The Legend of Sleepy Hollow”. Mr. Spencer was born in Yell County and taught school at Gravelly,… Read more »

My dad, Ira Henry, was a teacher there

In the early grades a lot of us girls played “house” using the magnificent roots at the bottom of trees in the woods right off the playground. I remember collecting acorns and bunching pine needles together to form a “broom” for sweeping out the house. That may be hard to visualize but my memory is very vivid of this. Then there was the merry go round made of metal with wooden seats. We would run and push it around to gain speed and finally jump on at the last minute. There was also a lot of kickball played all through… Read more »

One of my favorite things to do at Greenwood was to play on the bars. I practiced and perfected day after day til I learned how to do the infamous “cherry drop” & “death drop”. The cherry drop is where you would hang from your knees upside down and swing until you got high enough then you would jump off and Land on your feet (hopefully!) The death drop was a little trickier! You had to sit on top of the bar, fall back, and then let go and land on your feet! Both of which would scare my mom… Read more »

Attended 4th, 5th and 6th grade there in (I think) 1966, 1967 and 1968. I played quarterback on the football teams in all years. The 4th and 5th grades were combined and the 6th grade played by itself. My Dad (Dennis Davin) and Dr. Irwin Lax (optomologist for years in Hot Springs) were the football coaches for the 4th and 5th grade team and (Arkansas State Senator and then Garland County Sheriff) Bud Canada was my 6th grade football coach. We won the City Championship ALL three years then! We had to move back to Kansas City, Missouri after that.… Read more »

I am planning on another “road trip vacation” late this spring with my two grandsons and my eldest daughter to Colorado and New Mexico. We will spent at least a full day or more in Hot Springs. This maybe my last opportunity to show the boys and daughter some of the places I tried to grow up, but never have.
I am sure they will be impressed with Hot Springs and Gramp’s grade school and McCard’s BBQ.

The post is written in a very good manner and it entails many useful information for me. I am happy to find your distinguished way of writing the post.

I was there in the 6th grade (Sep 1956 – May 1957) with Mrs. Hull. She was the music teacher for the school and did all the holiday musicals. I have never forgotten the last day of practicing for the Christmas Program when she told me how much she wanted me to be in the program, but asked me to sing the songs silently. The other memory of that program was the boy who sang solo "O Holy Night" I had a similar request when the band teacher scheduled us to be a part of a parade somewhere down town… Read more »

What were the elementary schools before Greenwood opened in the 1920s and 1930s?

Also, we were in the gym or the auditorium for music appreciation in 2nd grade when the principal, I think his name was Mr. Mosher, came in and told us that President Kennedy had been shot in Dallas.

i went to 1st and second grade there in the early 60's. My first grade teacher was Mrs. Stewart.

Mike, I attended Greenwood from 1948 to 1954. (See my previous postings below from 2014 and 2016.) Mrs. Stewart was also my first grade teacher. A very good one as I recall. She paid attention to everyone and was extremely interested in “her students”. She would always speak to and check on “her students” through out their career at Greenwood. As I remember there were two teachers for each grade so half of all the students were hers. She got me of to a good start in my education. I wish my daughters could have been “her students”. I would… Read more »

I don't recall a lot from back then and only attend a few years, I recall the playground where we had these plastic "jet pilot helmets" and we would run down the grounds with our arms spread making jet sounds! Also there was a boy that would sit up on the parallel exercise bars and he would just fall off the back, flip in the air and land on his feet! I was always too chicken to try it!

Why is the bathroom in an abandoned school cleaner then the ones in my high school ? Like wtf !!!

most buildings in hotsprings tend to be haunted, is this one of them?

I went to school there from 76 to 82 and remember Mr. Burroughs as the principal who very patiently tolerated me and my madness. It is sad to see the school in such dire conditions, but glad to have the memories of being there.

I went in 75 &79 Mr Burroughs was the principal I remember a man of color as the music teacher calling me out to sing with SueSue Barnes an racheal ? Asked me if I was in choir I replied no and he said well you are now.. I was Hooly Hobby in a play still have Picts lol my Aunt made my costumes always Mertie Johnson she also taught piano- yes we had the best school best staff best food lol best playground ever- we used to set up house in them big ole tree roots- such a free… Read more »