The Gabe Elementary Meyer school was built in 1921 on West 23rd Avenue and Linden Street on land purchased by the school board in 1913 at the urging of board member Gabe Meyer.  Because of Meyers foresight in the purchase and many years of dedicated service to the local school system, the school board opted to name the new school after him.  The school went on to become a beloved fixture within the town of Pine Bluff, faithfully serving many generations and helping to positively shape countless childhoods.  Generations of dedicated teachers lovingly tended to the growth and education of the town’s youth.  Years are after years, decade after decade, and generation after generation the children came to lean and the teachers taught.  And today, if you asked 5 lifetime residents of Pine Bluff where they attended school, 4 of those people would say at Gabe Meyer.

As the decades went by it and the generations passed through it, the entire community around the school and even the world itself completely changed, transforming again and again until it hardly resembled what the school had originally known at all and yet through it all the school remained, ever faithful to its charge and ever vigilant to its duties.  Technology changed and completely transformed how the school went about its work, yet it’s commitment to that work remained steadfast and unwavering.  The parents of students returned to the same school that they had attended to drop the children off so that they too might learn.  Grandparents enjoyed sharing enjoyable stories and cherished memories of when they walked the same hallways and corridors as their children.

But nothing lasts forever and even the most cherished and beloved institutions eventually reach the end of their usefulness.  And as powerful and as driving a force as sentiment and memory fan be, sometimes there simply comes a point to where the cold hard economic truths of a situation can no longer be avoided or disregarded.  Eventually new schools must be built to replace the old ones and the mechanism and the means to maintain both simply aren’t there, so difficult decisions must be made.  The day comes when the students leaving the school building are the last ones that will ever leave it.  The time passes when the teachers close out and shut down their rooms at the end of the school year with the knowledge that those rooms will never be reopened.  Playgrounds and school yards stand empty after generations of play and laughter.  The last class of students through the school and the final set of teachers to work within it leave their mark upon the now empty shell of the old school building.  Books and bulletin boards, desks and lockers, graded papers and drawings remain behind for a while, providing a temporary testimony to the type of facility that the structure once house.  and then that too becomes nothing more than a memory as the demolition crew moves in with the goal of freeing up the land for further redevelopment as the community itself prepares to move onward into an ever changing future.  Across town a new school building is constructed, it’s doors open for the first time, it’s initial set of teachers prepare their rooms, the very first round of students happily and excitedly March into its halls, and the entire process starts over anew as the cherished memory of the old school continues to live on and abide in the hearts of all those children that attended it. 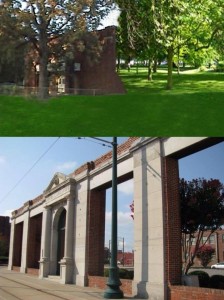 Sadly within the next couple weeks Gabe Meyer will be demolished. Pine Bluff historian Paul Perdue of Dallas Texas is working to save the front of the school to use as an entrance to a community park to replace the building. He says “I’m proposing saving the front wall and turning the rest of the block into a park in order to save a little piece of history. It’s a trend that has worked well in Fort Smith and Memphis…” To learn how you can help him with this project, add him on Facebook Link here or give him a call. (469) 442-5683 –  https://www.facebook.com/paul.perdue1/

“Pine Bluff will lose yet another historical landmark next week unless we can convince the City to at least save the front wall of Gabe Meyer and turn the rest of the block into a green space. This trend is spreading across the country and it sure beats having another vacant lot in town. Please contact your City Council member and anyone you know with the City about this. This idea will get Pine Bluff much needed positive publicity, plus historic preservation and architectural recognition.”
Gallery Below

This was my school long time ago. What a memories! I do remember my very first day and I even keep this work in my special place.

Why did these teachers have to leave those kids' info lying about to be found and photographed? Thank you for not putting children's private information on the internet. Some of those kids are grown, but some are still in elementary school in this town, and I'm sure their parents wouldn't have appreciated it.

I love the ceilings as well. I went to first through third grades here, beginning in 1973. I remember the stairs, the doors, and the auditorium. My art class was in the auditorium.

Do u know the first grade teachers name?

My aunt, Mary Lee Spears, taught there for many, many years.

A wonderful part of PB history.

Thank you for taking the time, and expense, to travel on such short notice to capture and preserve this moment.

Thank you and keep us informed. I forgot that there was a tin ceiling in the hallway…Ilved those hardwood floors upstairs. I can still hear that wonderful echo of our footsteps going to the auditorium to watch "films".

Why don't the sell some of the usable items?

If the building is still standing, your are welcome to go by and ask the demolition crew if you can take or buy something.