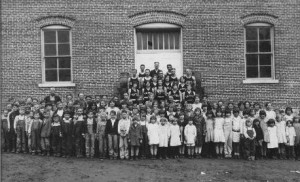 In 1915 the small town of Bates, Arkansas started construction on a new elementary school. The finished design was a two-story red-brick building with a stone framed foundation. Windows were rectangular with arched tops and the façade had a beautiful top above the tin roof. Inside the floors were wooden panels accented with floor and ceiling boards. The ceiling was a nice addition to the interior architecture and still remains there today. Finally after 3 years of building the school opened to the townspeople. The bottom floor was a grade school, while the upper level was elementary. After several generations of students passed through the old building, the school board decided to consolidate with Waldron. This ended up leaving the school empty. The school soon reopened as a headstart program and closed once again in 1965. 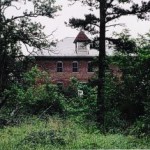 Bates left it sitting empty for decades, and finally in 2004, Ralph Cagle (A graduate from the old schoolhouse), had the idea to renovate Bates School into a community center. He and his supporters spent countless hours refurbishing the interior (adding doors, replacing windows and ceiling tiles, etc.) and exterior. Today, Cagle has stepped down as President and another Bates resident (Scott Thompson) has taken his place. The upper floor remains abandoned as the Community Center tries to find funding for it. Many of the desks from the 30’s still sit covered in dust upstairs and still have writings carved by students from long ago.


5 1 vote
Article Rating
Liked it? Help AAR take action to save some of these places on Patreon! Donations will help fund clean ups, securing of buildings and hopeful restorations as we work with the owners who want to bring them back to life.

A treasure we discovered on a random drive from Talihina..I am in love with this place..how can I help. cant financialy.

I really loved this article! It gave me some new insights I never really thought about before.

i will get you

Thanks, We'll be in touch!
-AbandonedAR Team

It is nice to read your article.

That is an incredible effort by Ralph. It takes a lot of effort and time to renovate such a place that has been abandoned for so long. I have a great liking for a person who does this stuff. I recently got my home windows replaced from value windows and doors and I saw that how much precision and care is taken while doing these things.

The pictures show a great renovation. That indeed is a great job. I would love to visit the place and get to see some amazing stuff.

Awesome. I may take a day trip to visit. The site says the lower level has been renovated to be a community center. If I read correctly. Would I be able to get in to photograph the second level?

What a beautiful place! I have seen worse and this can/should be restored. Check out Jacksonport State Park courthouse/museum. The buildings are very similar.

I'm a pianist, photographer, and lover of antiques and history. This is the perfect shot!!! Beautiful! Keep posting! Love your stories and photos.

wpDiscuz
11
0
Have history here? Would love hear your stories or your thoughts.x
()
x
| Reply