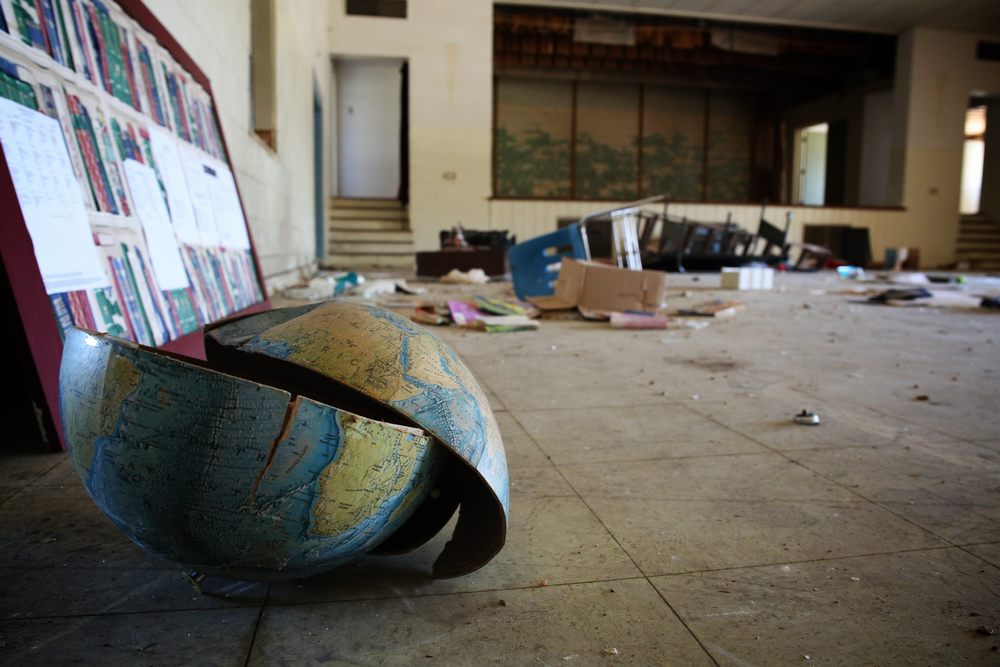 The history of Augusta elementary school is surprisingly undocumented; from public records to the school districts own website, there is not much written on the conditions in which this building was built, used, or those involved in its administration. Most of what we do know came from inside the school itself: the school moved locations in the summer of 2008, leaving behind the old one as well as most of the equipment inside. A fairly unique case for a school that remains unconsolidated, quite a few computers, documents, and other usable goods were simply left in the building to whither away over time.

The home of the Red Devils was recently ransacked by three teenage boys, turning an already decrepit building into a metaphorical hellscape. The boys were arrested on site and charged with trespassing and defacing public property. Though this act of vandalism is certainly tragic for the people of Augusta, it gave the community a new appreciation for their past and this building in particular. While exploring, we were met with several concerned citizens who were protective of the school and certain moves are being made to preserve the property from further damage.

One such individual was Jake Jones, who gave us a tour of the school he was proud to attend. Visiting from Little Rock, he came to the school to share memories with his son and found himself overwhelmed by the damage done to the building. After sharing some of the stories from his past and the now abandoned places that played a part in his life, Jones told us he was happy for what we were doing, preserving a piece of history for parents to share with their kids.

The school wasn’t just abandoned. The District built newer and bigger elementary school close to the HS. This building had asbestos everywhere along with other conditions which made it easier to build a newer school.

No it is not haunted. It closed due to consolidation.

I went to this school and am saddened that it was left to wither away. I remember planting trees by Hwy 64 for Arbor Day while attending this school. I remember the lunch room. Fond memories indeed.

Jake Jones–awesome article about you and Archer doing this!

I went to that school as a child and have many fond memories of it.

I love globes and it is sorrowful to see one ruined.

Sad to see the school abandoned. I remember my first grade play on that stage.

Why is it being abandoned? No kids??.

We now have all these mega schools and look at our pathetic selves.

Sadly we have become highly degreed but totally devoid of wisdom.

Apparently the major earthquake along the equator caused the population to flee for their lives.

Lots of usable things abandoned in there. The school should gather up and use some of those things.

Where I when to kindergarten -6th grade at.

Cool photos taken from the elementary school I went to.

So. You do leave a swathe of destruction in your wake?

Like Carrie, only instead of prom, it was a play, and Matt was assuming the role of Carrie IN the play to defy gender norms, and he used method acting…which gave him actual pyrokinesis

glad they were caught

I attended 1st through 5th grades in this building. I also taught 3rd grade for five years at the beginning of my teaching career. It is a shame that this building cannot serve some positive purpose in our community.

Not only that Linda, you lived right across the street from it almost all of your young life. :))))

I could write a book of memories. It brings a lump to my throat to see this..Thanks for checking up on it Jake and posting this article..and pictures…

Contact Rocky Tidwell. He is the mayor he would know who to talk to