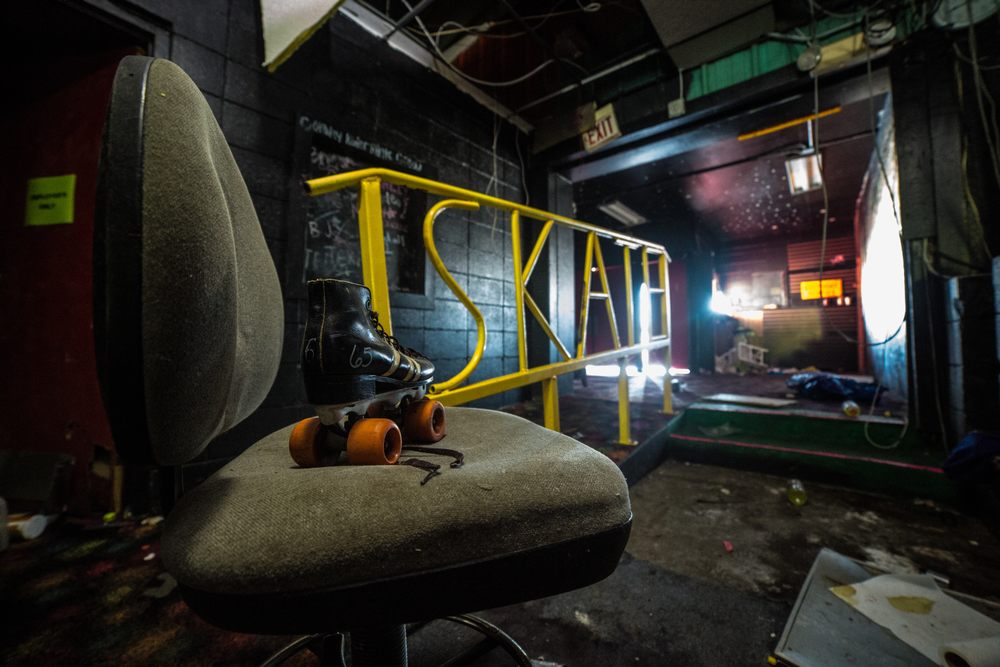 In 1973, Conway Roller Rink was built as a part of an expansion in the city of Conway’s recreational areas. Built in tandem with the 12 lane expansion of the Conway Bowling Alley, the Roller Rink saw steady business all through lifespan. Though often competing for business with their next door neighbors, the Roller Rink became one of the best visited sites from locals in the Conway area. After a while, the Rink developed a reputation as a college hang out due to repeated parties aimed toward that demographic. One of the prime examples of this was the rink’s participation in the “End of the World” festivities, which attracted thousands of college students and forced several blocks to close down. Though business did dwindle slightly toward the end of 2012, this was, tragically, not the reason for the shut down of the business and the abandonment of the building.

Larry Billings, the owner of the establishment since 1981, was shot and killed in his home on October 29th, 2012; though the building and business went to his wife and son, they chose to close the Roller Rink indefinitely. Much speculation has been made over the future of the property including demolition, renovation, and a merger with the ajoining bowling alley. As of now, however, there are no official plans for the Roller Rink and time is beginning to wear down on the structure. With leftover soda machines and forgotten roller blades littering the alley, this centerpiece of recreation for Conway families is quickly becoming harder and more costly to save.

If you have any memories of the Conway Roller Rink or please leave a comment. We’d love to hear your stories and experiences!

Man I hate that it’s gone. I have so many memories there I grew up in conway we would go there on the weekends.

I loved skating there . I was 14 years old 1971 it was attached to the bowling alley and had to walk through there to get in the rink. Later on after Larry bought it , it had its on entrance .My grandmother made me a red sparkled skating suit. I was the only one at that time to have one . Went through lots of skates. I miss it.

Oh, man, I used to skate here a lot when I was a little kid until I moved away in 2005. This place was where I learned to skate. I had my 12th birthday there

This place is garbage and dumd/ doodoo

I grew up going skating every Saturday. It was the place everyone came to hang out with friends. That building brings back a lot of fond memories. I hope someone will rebuild it for the next generation.

So many childhood memories. These photos are heartbreaking. I can't begin to imagine the pain this family has been through. It would be great if the community could rebuild it.

This is so sad… I had my tenth birthday there as a lock-in. So many memories.
I graduated with Larry's son. This breaks my heart.

Oh my goodness, it breaks my heart to see those pictures! I used to spend every weekend at the rink!! "Uncle Larry" was a huge positive role model and kept a bunch of us "kids" busy and out of trouble with the all night skates and lock ins!! He really was a great person and had the kindest heart and of course the skating rink may not ever be the same without him but it would definitely be awesome if we could get it cleaned up and turn it into the hangout for our growing children! Pass on the wonderful… Read more »

Man this article made me sad ?. So many memories..and I didn't know about Larry either.

This breaks my heart. I use to go there as a kid. It's sad that kids nowadays will not get to experience it.

I grew up at this place this was my second home every weekend we would have lock in which means you paid one price for the weekend an you couldn’t leave till Sunday morning. My friends an I ashley Bradberry an Steaphine Davis would live here! Larry was our second dads or even just a dad to some of us he was our go to person for help or advice! His wife an son should be ashamed of themselves to not keep this going for him! This was dream to keep kids off the streets An he did a damn… Read more »

The roller rink was there when I was in jr high 1967 and later. I had my own pair of white boot skates with big pink furry pompous. My folks, Ken and Jo StewRt bowled in the leagues so I was there most nights in 60s

I used to bring my boys there every Saturday night..they loved it! Larry was always so kind and even have my oldest son his first job at the age of twelve..he got free admission and $25.00 pay to check in people's skates and clean a little. My boys lived going to Taylor and Tylers house to hang out..I think this place should get a makeover and re-open.

So many of us kids grew up in this place in the 80s and 90s. Looks really spooky in this run down condition. What the hell is wrong with the billings family?? If they did not want it sell it to someone else, no reason to let it get this bad. I bet Larry's ghost is haunting the place seeing it like this.

started going here as an 8 yr old kid in 1986 and worked for Mr Billings for several years during college. I helped build the indoor jungle gym in the summer of 2001. I really miss this place and it is very depressing seeing it in ruins. really hope they find who killed Larry and put him to death

I am very heart broken to se the shape she is in. Very sad, made me cry. I know Larry must be very hear broken in Heaven as well.. For this was his 2ed Love, His Kid's (all of us) was his 1st. I have Meany Memory's of long skate night's, with People I look up too,and will never for get.. Larry, J.J. and Jerry… And Meany More Long talk's with Larry.. time I hold dear,and word's I for ever hold in my heart..Larrry was and always will be a up standing Man, He gave a lot of him self,to… Read more »

Man this place. I remember having my birthday party every year. This is where my love of skaking. Where I ran into the wall and somehow bruised my back taking my breath away. Where I was mad and embarrassed because they made me so the chicken dance and it was my birthday and I just wanted to skate. Then I moved away and around 2013 I visited Conway and could not believe it was no longer in business. I remember sitting in the parking lot for half an hour sadden by the fact that it was no longer in business.… Read more »

Man this place. I remember having my birthday party every year. This is where my love of skaking. Where I ran into the wall and somehow bruised my back taking my breath away. Where I was mad and embarrassed because they made me so the chicken dance and it was my birthday and I just wanted to skate. Then I moved away and around 2006-2007 I visited Conway and could not believe it was no longer in business. I remember sitting in the parking lot for half an hour sadden by the fact that it was no longer in business.… Read more »

Its a shame his wife and kid just trashed place after he was gone. I can see not wanting to mess with the rink so why not sell it? Why did they have to trash it? What were they looking for? I know he didnt leave it that way!