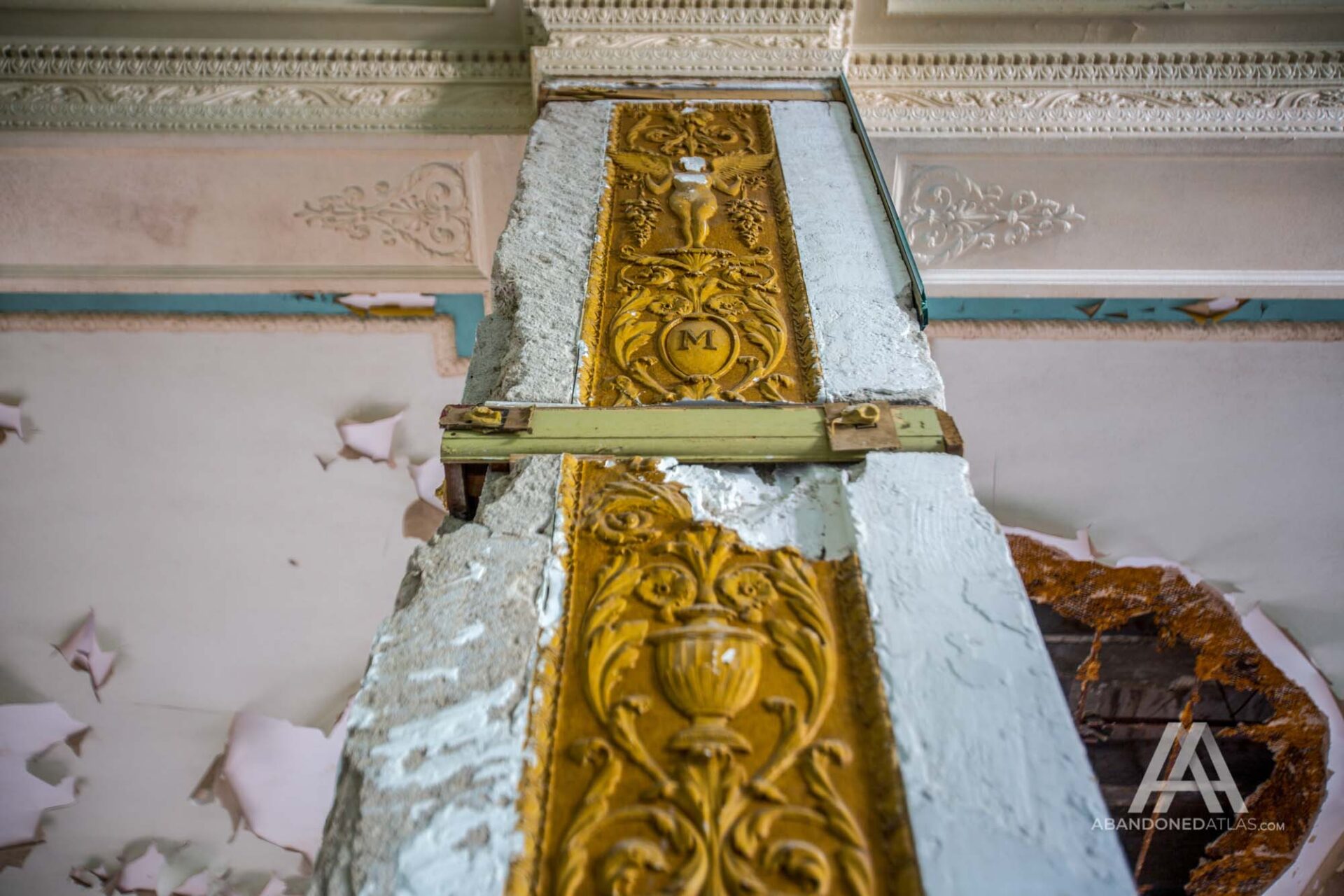 We are so excited to finally announce that a Documentary film we have been working on since 2014 was selected to have its world premiere at the Hot Springs Documentary Film Festival with a Q&A afterward. It has been a long, emotional journey and the Majestic Hotel will never be forgotten…
Movie Description:

“In 2014 the town of Hot Springs would change forever. A mysterious fire engulfed part of the Majestic Hotel in an eruption of flames. The historic landmark’s history goes well beyond that of the fire, however, the once bustling hotel that housed the likes of famous gangsters and baseball players in Hot Spring’s American 20s tells a story of city corruption and a decade of abandonment. Two activists race to save the building, and it’s legacy, fighting to keep the hotel FOREVER MAJESTIC.” 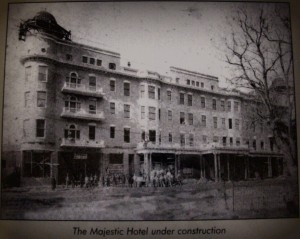 The Majestic property was originally the site of the Hiram Whittington House in 1870. The Avenue Hotel was the first name given to the hotel, built in 1882, featuring an electric dining room and gas-powered guest rooms. Streetcars arrived and departed every five minutes to transport guests to and from the bathhouses. She was renamed the Majestic Hotel in 1888 and was named after the Majestic Stove Company although no one really knows why. Perhaps someone there had an interest in the company or just simply liked the name. The newly named hotel featured a brand new invention, the elevator. In 1902, owner Harry A. Jones demolished the old wooden structure and replaced it with a five-story yellow brick building.  She reopened a short time later in 1903 with a fully equipped greenhouse, distinctive bull’s-eye windows and rounded brick corners.  The Majestic Hotel was one of the first brick buildings in Hot Springs, featuring 150 rooms, 50 of those with private baths.  This was also the grand opening of the famous restaurant known as The Dutch Treat Grill. A non-operational windmill hung over the restaurant’s front doors while window boxes full of fresh flowers wrapped her in beauty.

The hotel became the home of the Pittsburg Pirates during spring baseball training from 1901 to 1916 and then again from 1920 to 1923. Babe Ruth reportedly considered The Majestic hotel his favorite place to stay. The Majestic was also frequented by the Boston Red Sox and in the 1920’s Bugs Moran, known as Al Capone rival arrived for respite. The two held a “peace pact” while in Hot Springs and reportedly never scuffled while in town. In 1926 the Annex was added, featuring local A.W. Griffee’s flint faience, marble and stone fountain in the spacious, wood-adorned lobby.  The fountain bubbled with the world-famous natural spring waters. This is the still-standing; eight-story, red brick building that later housed The Grady Manning Dining Room, named for the new owner in 1929. His company, Southwest Hotels, renovated the structure adding a front porch, drug store, new bathhouse and a brick terrace.  The Annex also housed the soda fountain, a gift shop, a beauty parlor and a garage/gas station just adjacent to the hotel. These renovations helped the hotel to survive The Great Depression and Stock Market Crash of ‘29. In 1932, Grady Manning constructed The Majestic Lodge on Lake Hamilton the year it came to be. She boasted a beautifully decorated lobby with an incredible view of the new lake. 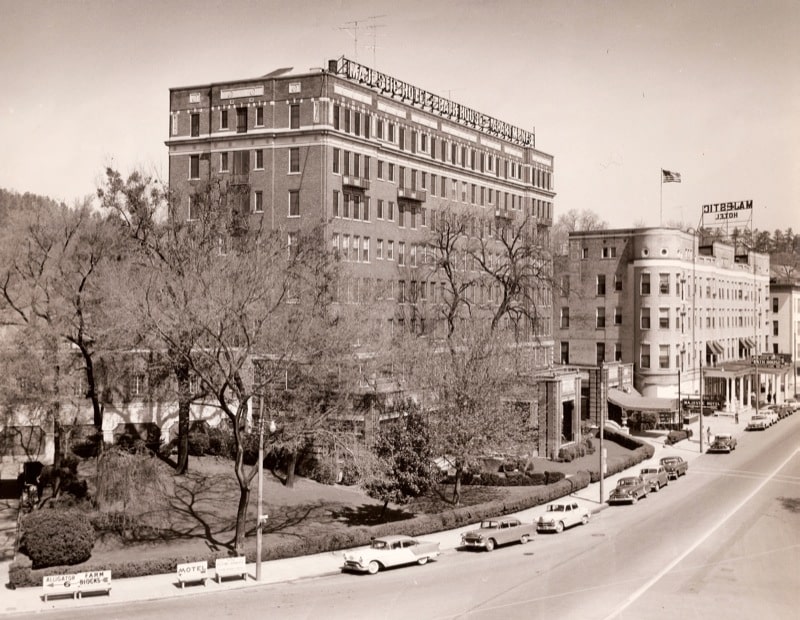 Radio Station, KTHS, owned a tower atop the Majestic Hotel and featured wonderful music including that of the “Southerners Orchestra”, complete with a banjo picker. The stations call letters stood for, “Kome To Hot Springs”. Directly across from the red brick Annex was the aforementioned Majestic Parking Garage at the corners of Arbor Street and Park Avenue. She was lovely with her white modern columns and signage reading, “Storage, Oil Changes, Parking”.  She once housed the famous Clydesdale horses during the wedding of August A. Busch, founder of Busch-Budweiser beer. He was married in the lobby of The Annex building.

In 1944, as their contribution to the war effort, the hotel offered her service as a redistribution center for the US Army for approximately 18 months. GIs were housed in the hotel upon return from overseas as they awaited reassignment or discharge. On December 15, 1945, the hotel reopened and this grand opening was attended by the famous actor, Alan Ladd, known for his television show, “Candid Camera”.  Phyllis Diller, Guy Lombardo, Hubert Humphrey, Liberace and Tiny Tim also stayed at the Majestic. Air conditioning was added to the hotel and all guest rooms in 1950. Highway 70 East was completed this year and moved traffic off of Park Avenue. This hurt the hotel immensely. Despite the highway and subsequent decline in use, the hotel added the Lanai Suites in 1958. The suites surrounded a waterfall and pools that were frequented by a scantily clad, Phyllis Diller, who drew quite a crowd in her bikini. The suites boasted the first of the modern sliding glass doors. In 1963, the 10-story Lanai Towers were added and was home of the famous “glass elevator” and two-level parking garage.

A major $1 million renovation took place in 1982 and was completed in October 1983. This was under the new president of Southwest Hotels, Monty Scott. The hotel, towers and suites all overlooked picturesque downtown Hot Springs and “the Crystal Fountain”. On windy days, one could touch the mist and sprinkles from that lovely lighted anchor of downtown.

130 rooms of the original yellow brick building were closed due to a continued decline in occupancy in 1988. In 1989, The Arlington and Majestic Hotels were combined and in 1990, The Majestic Hotel was home to five permanent residents. Five years later, in 1995, the original yellow brick structure was renovated. Despite this effort, occupancy rates continued to sink.

On October 13, 2006, Monty Scott, president of Southwest Hotels and owner of both The Arlington and Majestic Hotels, announced the closure of The Majestic. She was donated to Ark of Arkansas (a non-profit organization) in 2007 with plans to renovate and create affordable housing but the plans never materialized. On May 23, 2010, fire completely destroyed the Majestic Lodge on Lake Hamilton.

The beautiful, historic Majestic Hotel sat empty and forgotten until her sale to Gary Hassenflu of Garrison Properties, LLC, in January 2012. He announced plans to create retail space and apartments with the hotel property. On an unseasonably warm evening in February this year, fire robbed us of our historic treasure. February 27th, just days after the front page of the Hot Springs Sentinel Record displayed pictures of city workers boarding up her broken and vandalized windows, she was gone. Engulfed by flames that required 22 hours and as many as 75 men to extinguish her, she fell to a heap of rubble. Tears fell and hearts ached as lifetime residents and visitors alike watched the cruel fate of a neglected treasure. She’s gone but not forgotten. Her loss has ignited a fire of frenzy in the young and the old. Residents and many nationwide supporters have united to save this city. We will prevail! The loss of part of this great giant has a silver lining that will forever remain in the history of the revitalization of downtown Hot Springs!

Written by Brenda Brandenburg (Liz Robbins, Director of the Garland County Historical Society along with Connie and Gary Jackson of Hot Springs presented this history of The Majestic Hotel on April 21, 2014)

My parents visited Hot Springs about 1936. I’m attaching a photo they took showing part of the hotel. This was from a b&w negative I processed on the MyHeritage website.

This is the street in Hot Springs with the hotel in the background. 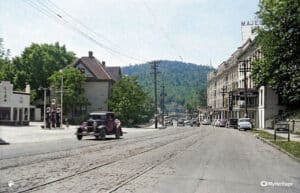 So many memories! We had started vacationing in Hot Springs sometime in the mid-1980’s. When we found this hotel, it was a godsend. We were a step-family and there were a lot tensions within and from outside of our family, so we very much looked forward to our vacation. The first night in Hot Springs, we stayed in the Holiday Inn on the east side of town, but it didn’t take my wife long to call around and find the Majestic. They had those adjoining rooms with a shared bathroom in the older part of the hotel, rooms 214-216. Those… Read more »

We spent our honeymoon there in 2002. Sorry to read that the hotel is gone forever. Even then it was clearly past its glory days but it was a wonderful stay. I loved the area and the surrounding beauty.

Too bad about the hotel. Was a great place

Hot Springs was wrong to demolish this beauty!

I read a lot of reviews and feedback of how great this hotel was. I only I have money i'll buy this and renovate and install spa inside. This is very spacious.

That is a shame. A huge piece of history destroyed. They don't make them like they used to.

I passed through here earlier this week and this is the second time I've been to Hot Springs since this location's demolition. I've never even lived in Hot Springs, yet I was surprised at how sad I felt standing in that gaping hole where this proud building once stood. It doesn't feel the same down there anymore. Both times I've spent at least an hour wandering the property marveling at how such a larger-than-life structure (Majestic was the perfect name) could have taken up such a small chunk of land. It seemed so huge that I thought the site itself… Read more »

Enjoyed every minute of our stay. Food was excellent. Staff friendly. Bedrooms large and clean. What more could you expect. To my mind it was value for money.Except for car parking. If I come to an hotel in my car I expect to be able to park it FOC.Thanks

I'm sure it was at a great price too! Complimentary breakfast was great (Asbestos Muffins and Moldy Bacon) Mmmmm!

Oh, seeing the news about the fire just makes me sick. My husband and I spent our honeymoon there in 2003, and while it was in desperate need of updates then, we loved its charm. The woodworking and tile in the lobby were simply beautiful, and I could only imagine what the soda shop was like in its heyday. We loved the breakfast room with its white tablecloths. We were able to use the bathhouse, as well, and it reminded me of something you'd see in movies about WWII. I am so devastated to see that the old beauty burned… Read more »

I would luv to help renovate this georgous building or help decorate the rooms. Please contact me if someone decides to rebuild. 716 940 8846

I remember mi grandparents going there often and i made few trips with them it was kinda spooky in its own way yet amazing there was a place for icecream and dancing at night down the street was auction housrs.i remember you could walk out the hotel onto the mountain play shuffle board.go swimming .i really enjoyed it.i recently was thinking of the past and decided to go and when i looked it up to find out it was abandoned was a bit heartbreaking..but i have pictures by the pool and old postcatds from the hotel ill treasure always.

Did you mean Allen Funt in reference to "Candid Camera" instead of Alan Ladd?

I stayed in the Majestic many many times as a child, but haven't been there for more than 10 years – it certainly wasn't part of the Barcelo chain last time I was there (I think it used to be Forte).