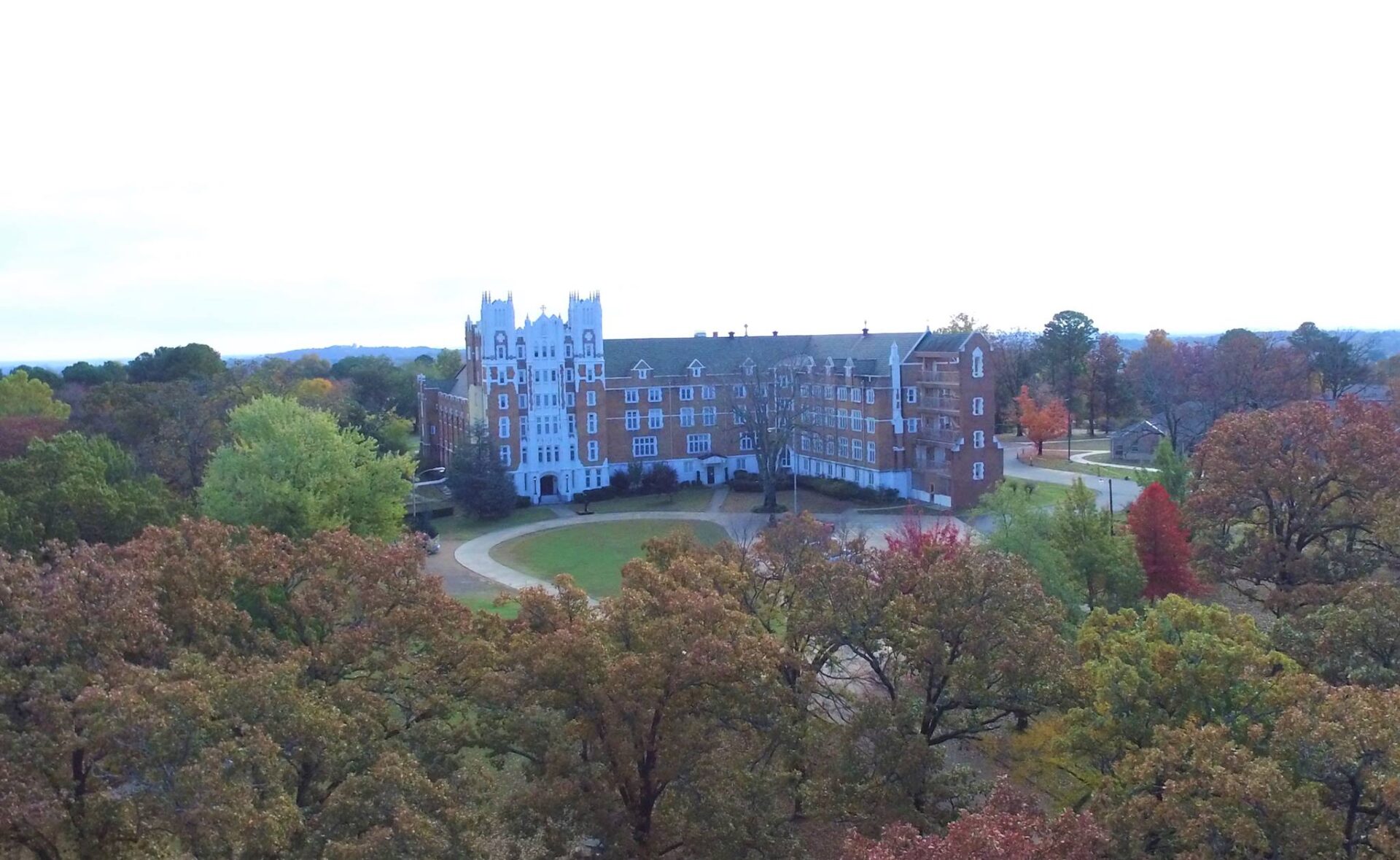 To some, a building might just be an assembly of stones and other materials. It may hold some sentimental value but at the end of the day be just a convenient shelter to protect from the elements. Buildings are so much more than that, they are our history, the accounts of every being who has walked within its halls. Buildings are the foundation for each person’s story told by the laughter and tears shed beneath its roof.

The St. Scholastica Monastery in Fort Smith has nearly a century and hundreds of people’s history and stories within its hallowed walls. Sadly, it was announced earlier this week that the monastery is set to be demolished on June 1st, 2022.

Have all the questions been asked, and to the right people?

Several years ago, it was estimated to be a $15 million demolition project, but there are a few questions that might be helpful in properly assessing the situation. The former residents have stated that they have done their research and looked for different avenues to try and save the building but to no avail. Helpful Questions: Where was the $15 million number obtained from? Is there a second opinion? Is that just to bring it up to code?

In 2016, a building in similar size was demolished in Hot Springs. The Majestic Hotel cost $1.2 Million to both demolish the building and service asbestos abatement. Given those parameters, we can only infer that demolition here is not going to be cheap either.

The money spent on demolition could be spent to preserve the structural integrity of the building, while an honest search for developers interested in saving the monastery begins.

We have seen this many times before | EXAMPLES

In 2012, the Villa Teresa school in Oklahoma City, Oklahoma was closed down after a unanimous decision. The upkeep of the old buildings from the 1930’s became too much of a burden and with very few women joining the order, closing down seemed like the right thing to do. The property was purchased by a group led by preservationist Marva Ellard and they plan to turn the convent into a boutique residence. In the very short conversation with Marva about the Scholastica, she was very interested in knowing more. She asked if it was for sale almost immediately seeing a photo. This just goes to show that with right awareness and connections, a lot of interest can develop quickly.

Sister Barbara Joseph Foley, a nun at Villa Teresa gave some insight about how difficult a decision like this could be.

“It was between the sister’s approval and the approval of the archdiocese. We looked at all the different ways we could save the building before we decided to sell the property. It’s a very emotional and tough decision to make.”

Maintaining a large building or series of buildings can be a herculean task, and sometimes it becomes too much of a burden for a small group to take care of.

“They could have a lot of reasons for demolishing the property, especially if they are getting older or if they are a cloistered monastery.” Sister Barbara said in regards to the sisters at St. Scholastica. “Land would mean a lot to them for the solitude if they are cloistered. They usually have a lot of acreage.”

There are many avenues to explore when considering what to do with a large old building or series of buildings. Sometimes giving other people a chance to have a future in an old home can continue its legacy in unexpected ways.

“We are really hopefully that families with children get to live in Villa Teresa, I think that would make the sisters very happy.” Sister Barbara said in regards to the renovation of her old school.

In November 2020, the Abandoned Atlas Foundation was made aware that the Menninger Clocktower in Topeka, Kansas was in danger of demolition. The owners had already submitted the permit which caused a huge public outcry. They began to relook at their options and in a last-ditch effort offered the building as a donation to anyone that had the means to restore it.  We got right to work creating a developer search video highlighting the need to knows of the building and providing pictures and reaching out all over the US to our contacts. Because we were able to talk to the right people and get the proper information and documentation at the right time, the Menninger Clocktower is now under contract and well on its way to a 7-21 million dollar restoration.

All hope is not lost for the St. Scholastica monastery. We have enough public outcry and we believe with a push in the right direction and just a little bit of time, we can search and work with many options that are still attainable. The monastery and everyone who called it home can still have a bright new future.

There is a Future

Rex Nelson, Senior Editor of the Arkansas Democrat Gazette says that the news concerning the monastery makes him physically ill.

“The monastery is certainly an important part of Arkansas history; we saw a whole series of catholic immigrants move into Little Rock and Fort Smith in the 1800s and increase the population of state. There are many iconic structures that were built during that period and this ranks up there with the likes of Subiaco in Logan County.”

With the major military mission coming to Fort Smith, people from all over the world are going to arrive, many houses will be developed, and there will be plenty of interest and uses for the building that has stood tall for the last 100 years in the heart of Fort Smith.

Nelson also stated that he has connections with legitimate developers in the area who are very interested in the monastery.

“I personally know of a few developers that have a keen eye on the monastery. Including someone who has already put millions of dollars into ongoing work in the downtown area.” Nelson said, “I just hope the members of the monastery have reached out properly and am not sure if they have considered all the developers that would be interested in saving this building.”

Rachel Patton, Executive Director of Preserve Arkansas is also very passionate about preserving and maintaining the history of Arkansas. She pointed out that the sisters at St. Scholastica are probably very overwhelmed with many people wanting to put their two-cents in and are rightfully a little defensive having worked on this for the last decade.

“To be fair, they may have been communicating about this locally, but I was unaware of the building’s dire need until this week.” Patton said.

There are other avenues aside from developers. The sisters with St. Scholastica care a lot about the Hispanic ministry in Fort Smith as well as foster kids and unwed mothers, among many other projects and people they are passionate about helping.

“If we can help them partner with someone and get some grant money and take care of the space, then they don’t have to run the facility themselves.” Patton said. “Maybe it can be used as a space for some of the projects and people they are passionate about lending their aid to.”

How we can help

The building is eligible for historic tax credits and has the potential for multiple ways to see a new life.

STUDENTS: We also work very closely with the University of Arkansas Fay Jones School of Architecture that has a class specifically designed to aid in the drawing up of plans of historic structures. In 2021, several creative students drew up plans for 5 abandoned building in Hot Springs and what a world of difference it has made. Seeing how they can be saved has really opened the eyes of several develops and even one of the buildings, Medical Arts building is under renovation as we speak.

If the opportunity is there and it works out, I’m more than positive that the students would be able to work within the parameters that you desire. I would be happy to put you in touch with Carl Matthews, the Professor of this class.

“Mayor McGill of Fort Smith is already making some calls.” Jurina Storm of the Mayor’s office mentioned to us. Mayor McGill is also looking to help explore different options for the sisters and the monastery.

There is still time to save this monumental piece of history. Sister Kimberly has been searching for a miracle and with everyone’s support and cooperation and every detail of the situation, with just 90 – 120 days the Abandoned Atlas Foundation could make a real effort to save this former home of the sisters and maybe with everyone’s help we could find the miracle they are looking for.

Based on the photos revealed in a press release, the current condition, although not in the best shape, the issues presented in the photos can be easily fixed in the big picture.

It’s not just all the sisters who have lived in and put so much work into the monastery that are saddened by this news. So many others lives have been touched by the building.

This is exactly why the Abandoned Atlas Foundation was founded, to fight for preservation, educate, and provide owners/developers with the needed resources to save historic buildings from an unruly fate. With the help and outreach of the Abandoned Atlas Foundation, we hope to give the people who love them a fighting chance at a new life, and to create new stories, for them and future generations.

What I see is the makings for a lot of apartments.

Prayers that it can be saved and repurposed.