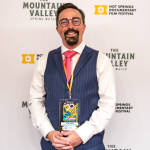 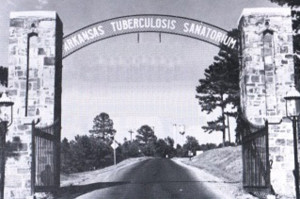 Located on the hill just a few miles outside of Booneville Arkansas stands the imposing campus that was once known as the Arkansas Tuberculosis Sanatorium. The entire campus is approximately 800 acres and was constructed in 1909 by Haralson & Mott, Erhart & Eichenbaum. The main hospital building was named after Senator Leo Nyberg who was a tuberculosis patient himself. At it’s peak the campus was at a larger population then the city of Booneville with over 1,000 patients and 300 staff members. 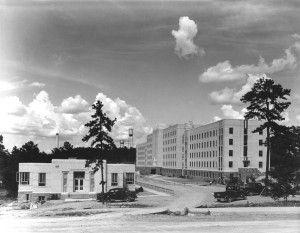 The National Tuberculosis Association’s mission was to set a network of Tuberculosis treatment facilities throughout the United States. Tuberclosis infection was specifically high in young people and those who lived in areas of poverty. Doctors and nurses were sent out to diagnose both the well and sick to determine Tuberculosis infection. Pneumothorax was performed under local anesthesia to collapse the lungs in order to treat tuberlosis patients. Rest, sunshine, and a milk and egg diet was also believed to be a remedy for the disease. Sanitoriums were constructed in locations to catch a breeze during all hours. Most notibly the Waverly Hills Sanitorium was constructed at an angle to catch the draft. The sanitorium still stands today and is under renovations.

In 1935 the city of Fort Smith donated land for the Wildcat Mountain Sanitorium to be constructed just a few miles outside of town. This was a sub branch to the Arkansas State Sanatorium. In 1937 the first patients arrived and soon the facility reached its full capacity. The Sanitorium was close on December 1st 1958 and is now demolished.

The city of Booneville donated more then 800 acres to construct the Arkansas Sanitorium which was 76 buildings. The price of patient admission was $10.00 a week. At the time it was its own city and was equipped with its own indpendent telephone system,  masonic lodge, chapel, water treatment plant, dairy farm, dormitory, and even a fire department. As more Tuberclosis  vaccines were invented the decline of patients caused the closure of The Arkansas Tuberculosis Sanatorium in 1973. Today the campus is owned by the state and the patients of Booneville Human Development are housed in some of the buildings. The Nyberg buildings first floor is completly renovated however the remaining four floors and basement are vacant. The Arkansas State Sanitorium was added to U.S. National Register of Historic Places on October 5, 2006.

I had three generations of ancestors entangled in working/staying at this place.

RIP everyone that died at this facility.

It was not vaccines, but rather Albert Schatz’s discovery of the antibiotic streptomycin that was the breakthrough that led to the shutdown of the big sanatorium’s in the US.

I investigated this building several years ago, and would love to get in contact with the current owners about doing it again. Does anyone have any contact info available for them?

My mother, Ethel Mae Brown, was a patient there in 1967-8, for 11 months. Almost every weekend we traveled to visit her. My father and siblings (seven of us) would sleep in the car over the weekend. Only my father and oldest sister were allowed in to visit, we younger children would stay in our 1955 Cadillac. I remember how hot it was in the summer and cold in the winter. We were always hungry. We were so happy when she Finally was allowed to come home. I’ve thought about the place many times over my life.

My Father died at the sanatorium on his 42 birthday, Jan 26, 1961. His name was English Woodrow Baker from Cove Ar. He left behind a wife of 22 yrs and 10 children, 9 of which were still at home. I was the baby and I was 18 months old. Looking back at the things I’ve been told, I don’t understand why they let people go home for visits with such a contagious disease. 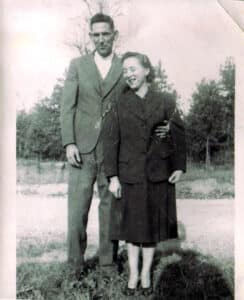 My grandmother workered the switchboard the day Kennedy was shot. I believe she went by her maiden name at the time Owens. Possibly Maxwell.

My Aunt, Martha Maxine Henderson died here in 1961. She did not die of TB, she was 2 years old and died unattended in a bath tub of scalding water. My family and I are trying to find out what happened. If anyone has any information or could help send us in the right direction we would really appreciate it.

My grandfather and granny both were there. His name was Tom McCourt, hers was Anna. I don’t know dates, I wish there was a way to search records.

Are there no records for former patients? What happened to them?

The record were probably destroyed or moved else where

My grandfather was there in the mid to late 50’s. I’m not sure if he was a patient or worked there. I’m trying to find out more information. If you find a way to search records, please let me know.

The Library there in Booneville has a bunch of the news letter that the sanatorium put out each month. Not sure what else they have.

Can you tell me about a patient Clarence Morgan Copeland please? I am an old relative. Thank you! God Bless!

I couldn’t find anything on the archives of her

[…] Arkansas Tuberculosis Sanatorium, at abandonedar.com/tuberculosis-sanatorium. The advent of the coronavirus pandemic adds extra resonance to the digital exploration of this […]

My mom entered this facility in 1952. In January 1953, my brother just older than I, my baby brother, baby sister and myself entered the facility. We all left in October 1953 and moved to Arizona on order of my mother's physician. My mom had surgery in 1952 for TB and passed away in 2003. Her mother died of TB in 1925 or 1926 from TB leaving nine children including a newborn. Would like to see post from others who were there.

My father was in the Nyburg Hospital and my sister,brother and I were at the Masonic children’s hospital in 1951 . Our mother was at the nurse facility. I would like to see photographs of the children s Masonic physillity at that period of time
My email isrobbie.guereca@yahoo.com

I was here about three or four weeks ago and I made contact with what I believe was a little boys spirit named Joshua, age 7. I have researched to find anything to further verify this but haven’t found anything yet.

Any way to go in without just breaking in?

can I break in easily ?

Is it haunted? Will they let you explore it?

I was born there in 1964, and then put up for adoption. I was told that very few babies were born there. Is there any way to access those old records?

Is there anyway to get old files of patients that were there and when exactly they died. My grandfather and his brother were there in the early 1930s

My grandfather was there sometime in the 1930's. His name was Luther Beam.

There is a book entitled "History of the Booneville Sanitorium". It may be available at the Fort Smith Public Library or possibly in Booneville somewhere. There IS a copy at the University of Arkansas-Fort Smith in the Pebley Center, this I know.

What happened to the bodies of the patients who died? My aunt would like to know where her aunt is buried.

Jennifer, im sorry about the passing of your aunt. There is a website you can go to to locate Graves by town, state, name. It is findagrave.com. I live in booneville area I was raised here then moved back after living in texas. I have always been interested in the history. The facility is still open. It now houses patients for the state who are incapacitated in some way. Unfortunately mostly mental development. I have relatives and friends that work at the facility. Yes, some buildings are not in the newest renovated state, but they are still beautiful. The grounds… Read more »

I am searching for information on my great grandmother Delilah Holmes. Someone has said that she died in a tuberculosis sanitarium in Arkansas just outside of Fort Smith. I do not know iif there was one closer than Boonville. Someone said she died in 1920, others have said she died in 1923. Are there medical records available that could be accessed to learn if indeed she lived and died there? Help

I’m penny jo Oliver. Is this my aunt Virginia ? My grandfather Miles Duncan was in this hospital as well.

There was a TB sanitarium outside of Fort Smith. It is not the same as Booneville. It was demolished in 1958, I believe.

I grew up outside Booneville in Earl Prairie. I've been to the San many times during the late 1930s and 40s. My sisters and I sang for the patients on a couple of occasions. We sang inside one of the buildings but I don't remember which one and we didn't wear masks – obviously – if we were to sing. The San played a major role in helping stamp out the dreaded disease of TB in the US and the people of Arkansas should be proud of the role they played. Everyone dreaded to enter the TB hospital but the… Read more »

My MOM BILLIE DAVIS-PITTMAN was there in the 1940s. She ran around with HATTIE DAVIS. And she lived until 1996!

wow what history that they are letting ruin…they should get some of the things out of there for a display. .so many neat things…so many people lost thier lives there and was treated.they need to get those things out before it is totally destroyed